In the superstitious world of baseball where everything seems to be an omen, the first inning of Kristopher Negron’s first game as the Mariners interim manager didn’t portend to positive outcomes when Jesse Winker, the unluckiest batter on the team and perhaps all of baseball, hit into a triple play three batters into the game.

Surely doom would find a depleted Mariners team that was without three players, two coaches and manager Scott Servais due to positive COVID tests. Not quite.

Starting pitcher Logan Gilbert suffered none of that supernatural nonsense. 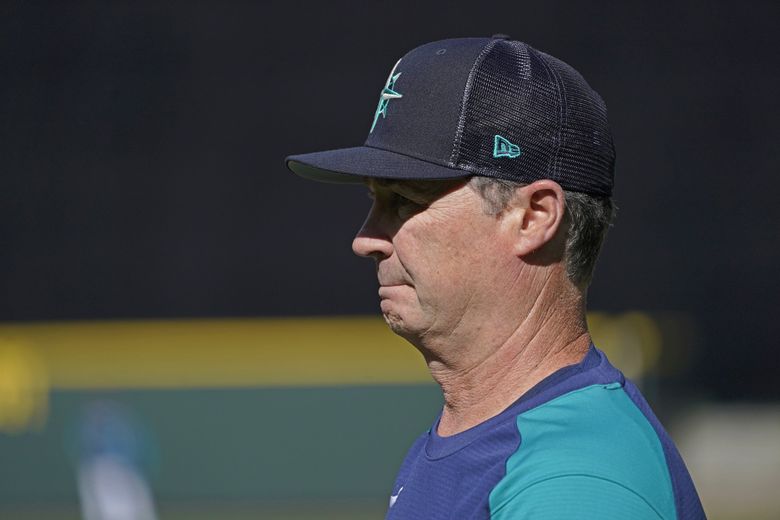 A year ago at this time, Negron was Class AAA Tacoma’s manager, but he had managed zero major league baseball games. Now he has his first MLB managing victory.

“It’s special,” he said. “I mean, again, I didn’t know this was going to be happening today. I always envisioned this as a possibility somewhere in the distant future or something like that. It’s a great group of guys. The staff is amazing. The players are great, and thanks to all them. Thanks to Skip (Servais). We were chatting the whole way.”

The Mariners have won five of their last six games to improve to 7-5 and will go for a sweep of the three-game series against Texas on Thursday evening with Marco Gonzales getting the start.

So about that first inning of Negron’s nascent MLB managerial career.

Gilbert shrugged off a pair of one-out hits by getting Mitch Garver to ground into a 6-4-3 inning-ending double play.

Facing Texas starter Dane Dunning, a sinker-throwing right-hander, the Mariners had the first two batters reach base with Adam Frazier drawing a walk and Ty France singling to left.

It brought Winker, who came into the game with the odd stat line of a .143 batting average and a .362 on-base percentage aided by a league-leading 12 walks. Beyond the raw data, Winker has suffered through some bad luck. He had a pair of sure run-scoring doubles robbed on the previous road trip and watched as the marine layer of the Puget Sound swallow up hard fly balls he thought were either homers or extra-base hits.

So of course, his scalded sinking line drive to the right side of the field was gloved by first baseman Nathaniel Lowe just above his shoe tops. With Frazier and France running on the possible ground ball, Lowe casually stepped on first base for the second out. With Frazier on third base wondering what had happened, Lowe flipped the ball to shortstop Corey Seager, who stepped on second base for the third out and the Rangers’ seventh triple play in club history.

Lowe could’ve easily stolen a piece history for himself and ran to second base to make it an unassisted triple play, which has only happened 15 times in MLB history.

“Yeah, that was pretty crazy,” Negron said. “We were talking about it in the dugout. What are the odds that was going to happen in the first game that you manage? But that’s a tough read. Wink smoked that ball right at the first baseman, and he caught it just off the ground. It’s kind of just a tweener type of play. But no, definitely didn’t think that was going to happen Day One.”

Winker could only shake his head in disbelief. His 101-mph line drive ended the inning.

“Instantly, I knew it was a triple play,” he said. “It was weird because it was one of those that may have looked like it bounced and you see that play happen every once in a while, and yeah, triple play.”

He doesn’t believe in superstitions. He believes in swinging at strikes and quality plate appearances and the success that follows. Winker had a single and another walk in four trips to the plate.

“I feel good,” he said. “I feel really good. I feel strong. I feel healthy and my swing feels fast fast.”

The Mariners, following their trend of recent success, continued to flood the bases with runners, knowing a hit with runners in scoring position would eventually happen. They grind on pitchers with their plate appearances.

“I don’t think there’s a there’s an easy way out of this lineup when you’re pitching against us right now,” Winker said. “And that’s a good spot to be in top to bottom.”

That first run came in the third inning when Abraham Toro doubled with one out and scored on Cal Raleigh’s hard ground ball to first base that Lowe couldn’t handle for an error.

The Mariners tacked on three more runs in the fifth.

Frazier, who reached base four times, led off the inning with a double and scored on France’s single to left field, which ended Dunning’s evening. France scored on J.P. Crawford’s sac fly to center to make it 3-0. And Winker, who picked up his sixth hit of the season on ground ball to the left side of the infield just out of the reach of a diving Brad Miller earlier in the inning, scored on a sliding play at the plate following Julio Rodriguez’s single to center.

After giving up a two-out double in the seventh to Adolis Garcia, Negron lifted Gilbert for Anthony Misiewicz, who got the final out.

“It was kind of weird night honestly,” he said. “I don’t think I had my best stuff. I had things that worked good enough, I guess. I wouldn’t say anything was just like nails, but it was at times good enough.”