PEORIA, Ariz. — One pitch changed everything.

In 2019, MLB’s 30 teams combined to throw 732,473 pitches. Some went where they were intended, others did not. Some were thrown with conviction, others with regret. And one ended Mitch Haniger’s season. 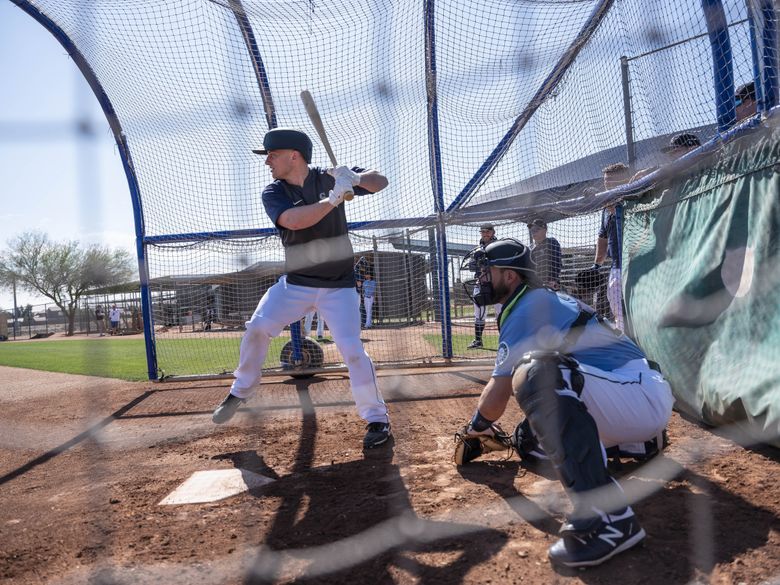 He was on pace to reach those plate appearances and pitch totals again in 2019.

But on June 6, a bright Thursday afternoon at T-Mobile Park, the 1,219th pitch thrown to Mitch Haniger sent him to the injured list for the rest of the season, led to three surgeries and delayed the start of his 2020 season.

The actual extent of the injury is still to be determined. There is no guarantee Haniger can ever return to his 2018 form or whether the Mariners will ever benefit from him on the field or in a prospect return from a trade.

And yet, Haniger arrived to Mariners camp Wednesday afternoon, six days after his latest surgery, with a level of optimism unexpected from someone who has dealt with so much since that fateful pitch — a 94 mph fastball from Justin Verlander.

“I’m feeling good right now,” he said Thursday. “I’m in a lot less pain which is great. I’m excited to be in camp with the guys and be around everybody. Hopefully, I can contribute to the team as much as I can on this time when I’m not going to be on the field.”

The seventh-month ordeal started with that Verlander four-seam fastball that bored in on his hands. There was no malice behind the 0-2 pitch, which was likely trying to set up Haniger for the next pitch, a slider away.

Haniger committed to swinging too early, and the ball caught the bottom half of his bat just below the barrel and shot straight into his groin. Because Haniger wasn’t wearing a protective cup, the impact from the baseball dropped Haniger to a knee and put him in immediate misery. Houston catcher Robinson Chirinos saw what happened, asked for time and took a courtesy mound visit to allow Haniger to recover.

Mariners release says Mitch Haniger’s injury occurred in the sixth inning but I think it happened here in the third inning. pic.twitter.com/FfO4n7CS0E

Despite the discomfort, Haniger finished the at-bat, laying off the slider away before striking out swinging on another slider in virtually the same spot.

He remained in the game, expecting the agony to dissipate. Instead, the dull ache in his groin and stomach lingered. It hurt to run. It was impossible to bend over. After another five-pitch at-bat and the pain growing from tolerable to terrible, he asked to be removed from the game.

Nobody expected the injury to keep him out for the season. In fact, in typical Haniger fashion, he pushed himself to get back by the All-Star break. That comeback was thwarted by core discomfort in July, then lower-back pain in August. But the real reasons for those issues wouldn’t be revealed for months.

The Mariners shut down Haniger’s season in September when his back never progressed, wanting him to rest and begin strengthening both areas in the offseason. Neither he nor the Mariners knew at the time that neither injury would heal with that rest and rehab.

“So early in my rehab last summer, I tore my adductor muscle attachment in my core,” he said. “Unfortunately at that time, it went undiagnosed and it led to my back injury (a herniation of a disc).”

Still, three months into this offseason, Haniger had no issues with his core or back. He was busy lifting and training at Sparta Science in the Bay Area.

The pain in his core and groin area had returned. He called his agent and the Mariners. He flew to Philadelphia to meet with Vincera Institute’s Dr. William C. Meyers, who also preformed core procedures on Robinson Cano. An MRI was ordered for Haniger’s pelvic region.

“He could tell right away what was going on,” Haniger said. “That adductor muscle attachment doesn’t get healed through rehab or rest. So I was kind of stubbing my foot that whole time, not knowing that was the issue.”

In the days following the surgery, Haniger began the rehab process in Philadelphia. But something was wrong.

Haniger underwent an MRI of his lumbar area and had it sent to Watkins Spine’s Dr. Robert Watkins in Los Angeles.

“It showed a significant herniation,” Haniger said. “It was so bad it looked like a piece of sashimi.”

He flew back to the Bay Area, drove to Los Angeles and had discectomy surgery last Thursday.

“I’m really happy now that both problems are fixed,” he said. “Surgery intervention was needed to fix both of those issues. Now I’m really excited that I can move forward and have a clear plan to get back on the field.”

How is he not angry, when it appears at least some of this could’ve been avoided?

“Definitely frustrating. You kick yourself about what could’ve been done differently,” he said.

There is solace in his progress before the surgeries.

“Talking to my wife and trainers and guys here, I was like, ‘Look, I was killing it this offseason with a herniated disc and a torn adductor, not knowing it and still putting up some really good numbers,’ ” he said. “The way I choose to look at it is — ‘What am I going to be capable of when I’m actually healthy?’ I’m excited to see what level I can be at, now that I’m fixed and starting this healing process. I think I’m going to be better than ever was when I get back on the field.”

He arrives in Arizona without a timetable to return and in the infancy of his recovery.

It’s changed him. How could it not?

“Mental toughness,” he said. “I’m pretty strong in that regard. I think I can get through anything. I’ve been tested a lot of ways these last seven months. The mental side of the game is really important, and going through a lot of adversity can really help in that regard.”