Through the first six weeks of the season, Chris Flexen had been perhaps the most pleasant development for the Seattle Mariners — a well-traveled pitcher making good on a second chance in the major leagues.

But even the Mariners’ most reliable starter couldn’t get out of harm’s way in this most hellacious week.

Flexen was roughed up for eight runs in less than two innings in the Mariners’ 16-1 loss to the San Diego Padres on Friday night at Petco Park.

It was the fourth loss in a row for the Mariners (21-24), and the shellacking was not the worst thing to happen to the Mariners on Friday.

Earlier in the day, the Mariners confirmed that one unnamed player had tested positive for COVID-19, resulting in a chaotic roster shuffling in the hours before the start of this six-game road trip. 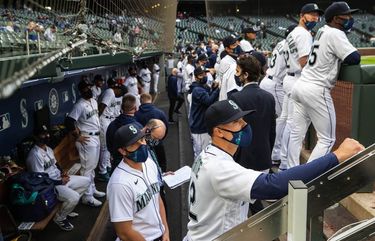 ‘We are not out of the woods’: Mariners have one player test positive for COVID-19
Advertising

Four relief pitchers were placed on the COVID-19 injured list in the wake of the one positive test and contact-tracing precautions. Those players could have to quarantine for up to 10 days in a San Diego hotel.

Even with reinforcements called up from Class AAA Tacoma, there was obviously a sizable void in the Mariners’ bullpen, whose strong start to the season kept the team hovering around .500 in mid-May.

The week started off well for the Mariners on Sunday, who beat reigning American League Cy Young winner Shane Bieber to take a series from a good Cleveland team and move to 21-20.

Then the wheels came off.

The Mariners were swept in a three-game series at home by a Detroit team that came into the week with the worst record in the AL. They were no-hit for the second time this season in Tuesday’s loss Spencer Turnbull to the Tigers, and their team batting average dipped below .200.

Gone are all the good vibes that came from the arrival of top prospects Jarred Kelenic and Logan Gilbert a week ago.

In their place are a series of questions and a mounting sense of frustration about an offense that was once again lifeless Friday.

“These games happen,” Mariners manager Scott Servais said in his postgame video call. “Over the course of 162 games, you’re gonna have this happen maybe five, six times throughout a season. It got us tonight, and it’s a little bit of a pile on with everything else that’s happened recently.

“But one thing you need to do as a professional baseball player, you need to compartmentalize; you need to kind of set it aside. You’ve got to go out; you have a job to do to go out and perform. Because if you if you can’t compartmentalize and it takes up too much of what’s going on between your ears, you’re not going to perform very well. We will get back after it tomorrow.”

Padres starter Chris Paddack held to Mariners to one run on three hits and two walks in six innings. He struck out six.

The game was basically over by the time Paddack came back out to the mound for the third inning.

Trent Grisham led off the bottom of the first with a home run off a Flexen hanging curveball, the first of four runs in the inning for the Padres.

They added four more in the second inning, including a three-run home run from star shortstop Fernando Tatis Jr., playing in his second game since retiring from a 10-day stint of his own on the COVID-19 injured list.

Flexen’s final line: eight runs (all earned) on 10 hits, with one walk and one strikeout in 1-2/3 innings.

Flexen was the worst-case scenario for the Mariners’ beleaguered bullpen. The Mariners ended up using five relievers to finish up the final six-plus innings, and the Padres added on seven runs to extend the blowout.

“Obviously, I wasn’t able to get it done,” Flexen said. “I threw a lot of horse (crap) pitches over the middle of the plate and I got hammered, and that’s what they’re supposed to do with those kind of pitches. I really screwed the bullpen and didn’t do my job very well today.”

The Mariners did make a bit of history late in the game when catcher Jose Godoy, called up from Class AAA Tacoma on Thursday, made his major-league debut as a sixth-inning defensive replacement.

What made his debut so interesting?

Godoy became the 20,000th player to appear in a major-league game. And to commemorate the milestone, the Mariners’ official Twitter account had a video ready to post featuring “Jeopardy” legend (and Mariners fan) Ken Jennings.