This feels different from before, doesn’t it?

The Mariners haven’t been foreign to fast starts in recent years, but this one seems like more of a forecast than it does a fluke. They are 10-6 after beating the Royals 5-4 Sunday thanks to a walkoff, 12th-inning single by outfielder Jesse Winker, and one can’t help but think this model is more sustainable than the ones that perpetuated the team’s 21-year playoff drought.

The pieces are there, and to quote “The Wire” — all the pieces matter. 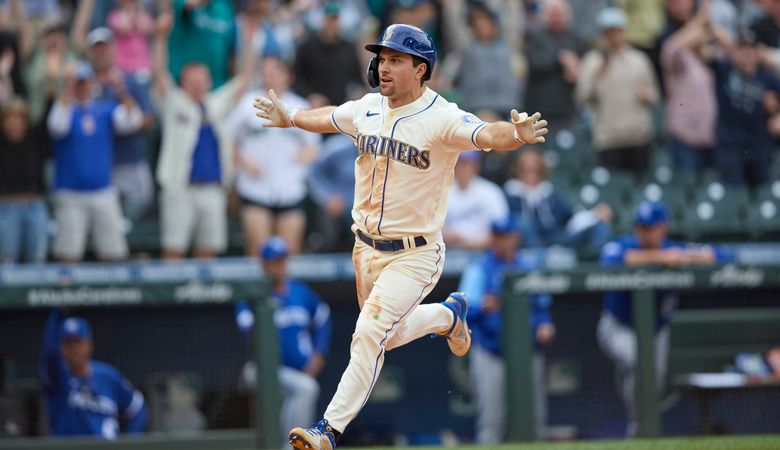 It takes some extra innings, but Mariners wrap up sweep of Royals after Jesse Winker delivers

Take Sunday’s starting pitcher Robbie Ray. The Mariners haven’t had a hurler this talented since Felix Hernandez was in his prime. Last year’s AL Cy Young winner has given the Mariners a chance in all but one of his four starts this season.

Sunday wasn’t a display of dominance so much it was a showing of survival. Ray allowed two runs in six innings while striking out five, but was instrumental in Seattle’s success.

“He did what Robbie does,” M’s acting manager Kristopher Negron said. “Puts quality pitch after quality pitch. He did a really good job today.”

And then there’s first baseman Ty France, who’s been doing his best Mike Trout impression through the first 10th of the season. In Saturday’s 13-7 win, France went 5 for 6 with five runs batted in. Sunday, he went 3 for 5 with two RBI, which came via a two-run home run in the first inning. He is hitting .375 with an OPS of 1.115.

As Winker said after the game France “has put us on his back.”

But it’s not just him. The Mariners bullpen Sunday matched the mastery that kept them afloat all season long last year. The only hiccup came in the ninth inning when Drew Steckenrider allowed a game-tying solo home run from Hunter Dozier. Other than that — six innings from the relievers with just one earned run. Quite the showing in front of the 28,548 fans at T-Mobile Park.

Of course, Winker — one of the three former All-Stars the Mariners signed this offseason (and that’s in addition to Ray, who won the Cy Young despite missing the All-Star Game) — was Sunday’s hero. Twice in extra innings he had an 11-pitch at-bat. The first came in the 10th when he hit a sacrifice fly that scored second baseman Adam Frazier and tied the score. The second came in the 12th, when he singled home Frazier with two strikes to win the game and get the Gatorade bath.

Maybe he was a prisoner of the moment when talking with the media in the clubhouse after the game, but Winker essentially said that his time in Seattle has already surpassed the five years he spent with the Reds.

“So far this has been the best team I’ve been a part of and the most fun I’ve had in my career.”

Last year, despite winning 90 games, the M’s had a -51 run differential, prompting some to think a regression to the mean this season was inevitable. Maybe it still is, but there is no sign of that yet.

Perhaps one might point to the fact that the Mariners are tied for third worst in MLB for runners left on base as a sign of trouble. The other interpretation, of course, is that they’re giving themselves ample opportunity to score but are coming up short. Stats such as those tend to even themselves out as the season progresses. We’ll see what happens.

The fact that the Mariners started 10-6 last year and 13-2 in 2019 can’t be overlooked. They have a knack for teasing their fan base. But Ray thinks the diehards sense this year is going to be different.

“They feel that this team has something special going on,” Ray said of the fans. “I’m excited as the season goes on, more and more people start catching on. I think it’s going to be a lot of fun.”

One can never get too comfortable with this franchise. Fearing a drop-off is justified.

But you can’t deny the talent is there — and that winning may just become the norm.