PEORIA, Ariz. — When April 1 finally arrives and T-Mobile Park is adorned with the traditional red, white and blue bunting that signifies the unrecognized holiday that is opening day of the baseball season, will there be fans in the stands to celebrate the moment?

What about when Marco Gonzales leads the Mariners onto the emerald grass in crisp white uniforms to face the San Francisco Giants? Will there be any spectators to take it all in?

The Mariners know there won’t be the packed house of the prepandemic days, but they are holding out hope that some fans will be in the stands when Gonzales throws that first pitch at approximately 7:10 p.m. to kick off the 2021 season.

Mariners chairman John Stanton made an appearance at the team’s spring-training complex Wednesday and talked with the media in attendance. They were his first public comments since the resignation of Kevin Mather. While much of the discussion was about replacing Mather and a new leadership structure, he was happy to talk about fans being able to attend games after a shortened 60-game season in 2020 with only cardboard cutouts in the seats. 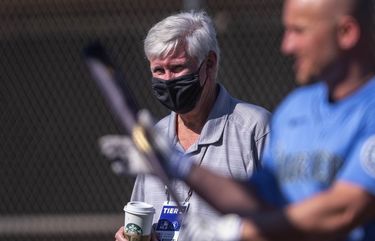 “I have to confess that I have spent a good deal of my time, really the last month plus, working King County and working with the state of Washington,” he said. “Right now, we are hopeful that that we will have fans in the building. We are excited about that, and we’re planning for it. We’re training our staff and doing all things we need to able to accommodate fans.”

If it can’t be for opening day, then Stanton is hopeful it happens in that first month of the season.

“Realistically, if the trends continue with COVID, we’re all going to be vaccinated within a few months,” Stanton said. “I would assume that the rules will change as we go through the season. But I’m hopeful for opening day.”

King County is in charge of overseeing the implementation of the operating manual. Stanton and Trevor Gooby, the Mariners’ director of ballpark operations, recently had Patty Hayes, the King County director of health, visit T-Mobile Park to show her all of the changes for social distancing, how the safety protocols would work in every aspect and generate any feedback for changes that need to be made.

But the final decision will come down to Gov. Jay Inslee, who must approve the plan to allow a gathering of such a large group of people.

“I think it was exactly a year ago that the governor and I talked about whether we will be able to have fans in the stands,” Stanton said. “That was the point at which we were going to play two weeks of games down here, if you recall. I said to him back then, ‘When we come back with fans, we want to be a model for the country on how to do that safely.’”

The Mariners don’t have a timetable for when they need Inslee’s approval to begin preparing for fans. But they’d like to know in advance to start ticket sales and outline the safety protocols for fans attending games. There will be pod seating and masks required.

“We will make it work whenever we find out,” Stanton said. “But the sooner we find out the better,” Stanton said. “We have staff that is in training. We have to know if they’re going to be working shifts. We have tickets that we have to sell and communications and we have to do. We have to make sure that we communicate before people come into the building and that they’re going to need masks. If you are coming to the suite level, you are getting temperature checked. We’ll have a series of steps that we go through.”

The Mariners’ situation stands in stark contrast to the team they played at the Peoria Sports Complex on Wednesday.

With Texas Gov. Greg Abbott’s recent order going into effect, allowing businesses in the state to operate at 100% capacity, Texas Rangers president of business operations and CEO Neil Leibman said Wednesday that the team hopes to be at 100% capacity for the April 5 home opener vs. the Toronto Blue Jays.

The Rangers would still require fans to wear masks, unless they are eating and drinking at their seats. The new stadium in Arlington was allowed to host fans for the postseason, including the World Series, at 28% of the 40,518-seat capacity.

It would seem like the Rangers would need MLB approval for something so drastic. But Leibman told reporters that MLB allows teams to operate under the local prevailing capacity policy, as long as adequate protection for players is in place.

Besides masks, the Rangers would follow spring-training protocols — cashless transactions and no tailgating outside the stadium. When weather the permits, the retractable roof would remain open.

“We’re very confident we won’t be a super-spreader event,” Leibman told The Associated Press. “With all the protocols that we’re following, we’ll be extremely responsible and provide a very comfortable environment for somebody to enjoy the game without worrying we’re going to be a spreader event.”

The state of Texas has been vastly more open than Washington with in-person learning for schools and 50% capacity for commercial outlets. Fans have been allowed to attend sporting events from high school to the pro levels since last summer. Texas is also allowing concerts and other events. The stadium hosted high-school graduation ceremonies, the Wrangler National Finals Rodeo in December and a recent college baseball tournament — all with spectators.

The state of California is operating in a tier system. The three teams in Southern California — the Dodgers, Angels and Padres — are operating in counties under the purple tier, meaning they can’t allow more than 100 fans. And all fans must be from the region with no concessions available. The Oakland A’s fall in Alameda County, which is also purple tier. The San Francisco Giants will be allowed to have 20% capacity since San Francisco County is at red tier.

Here’s a list of other teams that will or will not have fans in attendance for their home openers, including their planned percentage of capacity.