With the glow and good feeling of postseason baseball still felt, even with a frustrating finish in Saturday’s 18-inning loss to the Astros, and the understanding of so much being accomplished in 2022 and the possibility of more ahead, the Mariners’ season-ending media session had a vastly different feel than years past.

The optimism heading into the offseason and for 2023 is based on something more than hope and potential.

As manager Scott Servais said often during the postseason: “This team is good.”

After starting a step-back rebuild that started in 2019, was disrupted by the COVID-19 pandemic in 2020, gained traction in an unexpectedly successful 2021 season with a late postseason push and 90 wins and reached a postseason goal this season, the organization believes it can push beyond good to great. 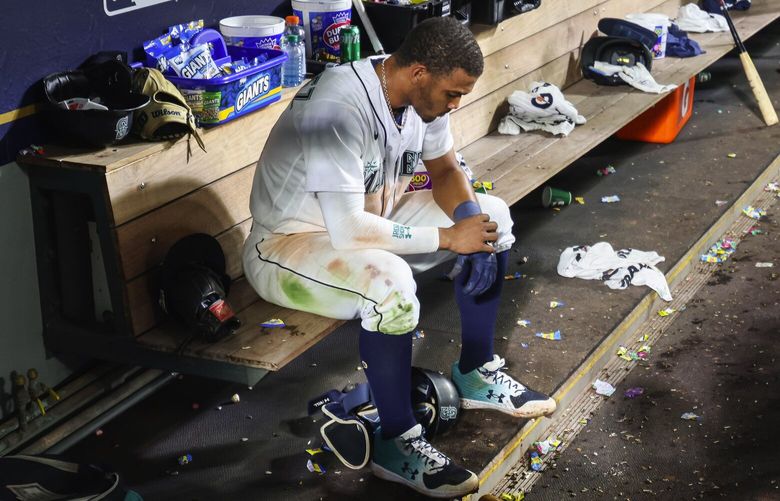 “I think we need to get better,” said general manager Justin Hollander. “We had an awesome year. I think everybody up here will say that 10 times today. We’re really excited about the progress we made. We also finished 16 games behind the Astros. So the goal was not to get to the playoffs, the goal is to win the World Series. We want to get better and that means better everywhere.”

That augmentation is largely in player acquisition since the Mariners’ farm system doesn’t have position player prospects at the higher levels who could offer immediate impact.

Seattle will look to access those players via free agency or trades.

“We’ll be active,” said Jerry Dipoto, Mariners president of baseball operations. “We know there are a couple of holes to fill on the team. Regardless of what we do, the bulk of what our 2023 team will look like is already here. That’s the most exciting part of this. I love the makeup of this team. There’s no reason to turn too much soil here. We have a really good young foundation to build on and we’ll continue to find ways to get better.”

The anticipated holes would be at second base and one or both corner outfield spots. Adam Frazier, who played primarily second base but also helped in the outfield, will be a free agent after the World Series ends. Right fielder Mitch Haniger is also slated to be a free agent, though the Mariners could try and bring him back via a qualifying offer or a new contract.

The Mariners could look at some combination of Jarred Kelenic and Jesse Winker to handle the corner spots, flanking Julio Rodriguez.

But given the inconsistencies the team displayed at the plate for much of the season and noticeably in the postseason, and the unpredictability of Kelenic and Winker moving forward, adding impact hitters to fill one or all of those spots would be logical.

Aaron Judge headlines the group of free agent outfielders, but beyond him there isn’t a terribly big name. Still, there are plenty of options.

The best players in this free agent class are at shortstop where Trea Turner (Dodgers), Carlos Correa (Twins), Dansby Swanson (Braves) and Xander Bogaerts (Red Sox) are all on the market.

A year ago at this time, Dipoto told shortstop J.P. Crawford that he would be the team’s shortstop moving forward. He then rewarded Crawford with a five-year, $50 million contract on the first day of the 2022 regular season.

Is Dipoto locked in with Crawford, one of the team’s clubhouse leaders, as his shortstop despite a subpar year at the plate?

If the Mariners moved Crawford to second base, any of the four shortstops would represent a significant offensive upgrade, with Turner, Correa and Swanson at a similar defensive level as Crawford.

“Our great preference would be that we can land a shortstop that would like to go play second base,” Dipoto said with a chuckle. “But we’re not going to close the door to anything in that regard. J.P. is our shortstop and he’s our emotional leader. We feel like he does a very good job in anything that we asked him to do. He was banged up at the end of the season as well and dealing with a knee issue of his own.”

The Mariners tried to find that shortstop last year in a class that featured Correa, Corey Seager, Trevor Story and Marcus Semien. It didn’t happen with Story, who turned down a similar offer from the Mariners to play second base for the Red Sox.

It’s likely Seattle will check in with all four free agents, but the ask of moving positions might not be received well. It’s fair to wonder if they are limiting their bargaining position with the ask.

“From the time he stepped on the field here for the Mariners, J.P. has done nothing but make positive contributions,” Dipoto said. “I think he connects with our fans in a way that very few players have in the course of my time here. He has a way of elevating the emotion of our team in a way that very few in our clubhouse have that ability to do so. He’ll line up for us opening day at shortstop and the goal is to find someone to put around him. If we do find someone who plays shortstop that person would very likely move to second base, but that’s a discussion for then and not now.”

There is a belief in baseball circles that the Mariners always have to overpay on the free agent market, particularly for position players, to offset the park factors, travel and other aspects surrounding the organization. But does making the postseason in 2022 help get players for 2023?

“We ended the drought,” Servais said with a chuckle. “We are much more attractive than we used to be.”

“And we have Julio,” Hollander said.

“Yes, we have Julio,” Servais said. “Looking at different players around the league, you get a vibe from players. And the vibe that I got from other managers, players, coaches on other teams is that we have people’s attention. People know we have a good team and then we went out and proved it by ending the drought and winning a playoff series. People understand that. It’s how we play. I think players want to have fun. At the end of the day, they all want to get paid to take care of their families. It’s a business, but they want to enjoy what they’re doing. It’s a bunch of grown up kids really just playing a game and I think that’s how our team plays.”

Servais knows the negative aspects, but he will counter with a fan base and the electricity of the crowds, the players locked into the team for years to come and the potential of more.

“I think it’s a super attractive place,” he said. “Yes, we do have some longer flights. Yes, we do have rain once in a while, but we’ve got a roof. We’ve got a lot of things covered here. And the biggest thing is that we have good players, we’re going to continue to win and be in the playoffs on a consistent basis. It’s a good ownership group. I think it all lines up.”