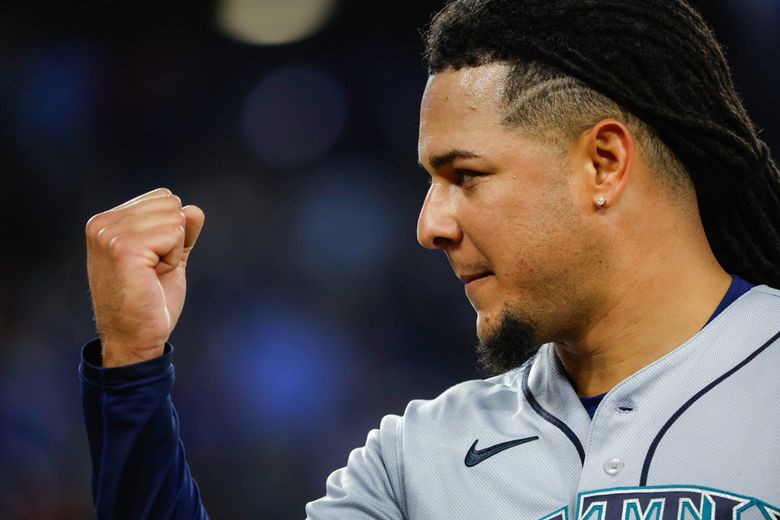 TORONTO — After striking out the side in the seventh inning in his seemingly effortless fashion, whipping triple-digit fastballs with terrifying movement past hitters, freezing them with knee-buckling sliders and mixing in a few shake-your-head change-ups just because he could, Luis Castillo flashed a grin, removing his hat and offering his trademark fist pump that is looks like a celebratory uppercut.

This is why the Mariners made acquiring the 29-year-old right-hander their priority at the Major League Baseball trade deadline — this setting, this moment, this performance.

Always at ease on the mound regardless of the situation with heartbeat that seems to remain at resting level, Castillo delivered the best postseason pitching performance in Mariners team history. And this is an organization that had Randy Johnson.

Castillo became the first Mariners pitcher to toss seven-plus shutout innings in a postseason game, dominating and demoralizing a stacked Blue Jays lineup in the process, while leading the Mariners to a stunning 4-0 victory in Game 1 of the American League Wild Card Series.

The Mariners made their first playoff game since 2001 count with a Game 1 victory over the Blue Jays behind a stellar start from Luis Castillo.

Castillo allowed six hits and struck out five across 7 1/3 scoreless innings to shut down Toronto in front of a loud crowd at Rogers Centre. The Mariners ace didn’t issue a walk.

The Mariners got on the board early, scoring three runs on Eugenio Suarez’s RBI double to plate Julio Rodriguez and a moonshot home run from Cal Raleigh (who else?). They also tacked on a run from Rodriguez in the fifth.

Lefty Robbie Ray starts for Seattle against Blue Jays right-hander Kevin Gausman in Game 2 on Saturday at 1:07 p.m. as the Mariners eye the wild-card series sweep.

Munoz back out to pitch the bottom of the 9th

Castillo with the best postseason start in franchise history

The Blue Jays called in All-Name pitcher Zach Pop to pitch the eighth. Eugenio Suarez led off with an opposite-field single. Cal Raleigh worked a full count before chasing off the plate to strike out. Mitch Haniger sliced a fair ball down the third-base line. With runners on second and third, the Blue Jays turned to Trevor Richards to replace Pop.

Richards struck out Carlos Santana before inducing an inning-ending groundout from Jarred Kelenic.

So I was wrong, Castillo's day was not done. He retired one batter before hitting George Springer on the hand. Springer went down immediately but was able to stay in the game.

The Mariners called on Andres Munoz out of the bullpen. Bo Bichette flew out to right, and Vlad Guerrero Jr. grounded out to J.P. Crawford to end the inning. You can breathe again, Mariners fans.

And then Munoz hits 103 mph on first fastball

Luis Castillo taken out after 7 1/3 innings

Castillo hits George Springer on the hand and Springer is hurting

Luis Castillo back out to start the bottom of 8th

Adam Frazier grounded out to first, and J.P. Crawford followed him up with a groundout to short. The Blue Jays decided to replace Tim Mayza, who had faced three batters, with Yimi Garcia with Julio Rodriguez at the dish.

Rodriguez singled into left for his first postseason hit. Garcia was able to get out of it after fielding a weak grounder from Ty France.

Luis Castillo struck out the side in the bottom of the seventh as his pitch count creeped toward 100 (99). His day is probably done, but he did everything and more the Mariners could ask of him.

After allowing a fourth run in the fifth inning, Alek Manoah followed it up with two groundouts before he was replaced by Tim Mayza. The Blue Jays lefty proceeded to get Jarred Kelenic to ground out on one pitch.

Luis Castillo started off the bottom of the sixth with a big strikeout of Vlad Guerrero Jr. before getting Alejandro Kirk to pop up behind the plate and Teoscar Hernandez to ground out to third.

That’s what you want from your ace.

Luis Castillo is dealing for the M's

The Mariners used a perfectly executed hit-and-run after Julio Rodriguez was hit by a pitch for the second time in this one to set up Eugenio Suarez for a groundout RBI and a 4-0 lead.

In the bottom of the inning, Castillo continued keeping the Blue Jays at bay with two fly-outs. Whit Merrifield then hit a bloop single to left field and George Springer followed it up with a perfectly placed single between first and second. But Castillo jammed Bo Bichette for a groundout to Adam Frazier.

Ty France hits Julio to third base on hit-and-run

Alek Manoah continued to settle in with an eight-pitch inning to retire the side.

In a game of "anything you can do I can do better (or at least basically the same)," Luis Castillo needed only 10 pitches to get through the side. It's still 3-0 M's after four.

Home plate umpire Lance Barrett is making his presence known early in this one, including on a strike two call below the zone on Cal Raleigh.

Regardless, Alek Manoah is settling in. He got Eugenio Suarez to ground out to third, struck out Raleigh and forced Mitch Haniger to pop up in foul territory. Manoah sits at 54 pitches through three innings.

Meanwhile, Luis Castillo pitched through trouble after leading off the bottom of the third with two quick outs. George Springer hit a line-drive single into right-center field and Bo Bichette hit an infield single before Castillo got Vlad Guerrero Jr. to fly out to end the threat.

Castillo gets first strikeout of the game

Manoah retires the Mariners in order in the third

The Mariners put pressure on the Blue Jays in the top of the second. Adam Frazier singled with one out. J.P. Crawford worked a walk to put two on for Julio Rodriguez. Alek Manoah struck Rodriguez out on three sliders. Ty France flew out to right to leave two stranded.

Toronto looked to get something going when Alejandro Kirk singled on a two-strike count for the Blue Jays' first baserunner of the day. Eugenio Suarez fielded a double play to clear the bases. Toronto left one stranded after a two-out single.

Castillo is through 24 pitches through two scoreless innings

Alejandro Kirk leads off with single down right-field line

... and he strikes out on three straight sliders

Two on, one out for Julio in bottom of the second

Jarred Kelenic strikes out on pitch off the plate

An early lead was important for the Mariners inside a loud Rogers Centre — and that’s exactly what they got.

Julio Rodriguez took a high pitch off his hand (and thankfully, the pad he was wearing) in the first at-bat of the game, was moved over on a groundout by Ty France and then scored on Eugenio Suarez’s RBI double down the right-field line. Even better: Cal Raleigh followed up with a moonshot homer.

Staked with a 3-0 lead, Luis Castillo made things look easy in the bottom of the inning. Castillo went 1-2-3 with three groundouts across all of 11 pitches.

What a start for the M’s.

It's finally time to play ball

Mariners coming out for BP

J.P. gives a shout out to former teammates Dee Strange-Gordon and Kyle Seager for helping push club to this point. On Seager: “I really wish he was here. He molded this team.”

And the rest of today’s paper has more great stuff on the Mariners: pic.twitter.com/H7sh1Ll1kM

Lineup out for Mariners' first playoff game in 21 years

How the Mariners can make a deep postseason run this season

TORONTO — A month ago, the Mariners were everyone’s sneaky, darkhorse, under-the-radar, chic pick to advance deep into the baseball postseason. Maybe even all the way to the World Series. Indeed, you heard it so often that the sentiment could be found perched on top of the radar, no longer hiding under it.

And then reality hit. Julio Rodriguez got a wrist injury, and then a back injury. Mitch Haniger tweaked his back as well. Eugenio Suarez hurt his finger, and so did Cal Raleigh. Starting pitchers who had been sailing along in style suddenly seemed to hit a rut in unison. The lockdown bullpen hit a spell where the lock was picked, resulting in massive vandalism of the Mariners’ aura. The ballclub went on what was to have been a cakewalk road trip and lost seven of 10.

As manager Scott Servais said after the regular-season finale Wednesday, “Everybody thought the sky was going to fall, and the Mariners would never win another game.”

TORONTO — And the man-child shall lead them into the place where legends are born and triumphs are immortalized.

The exploits and accomplishments of Mariners outfielder Julio Rodriguez, of which there are many despite his limited time in professional baseball, have already been written or spoken often into the lore of the precocious 21-year-old prodigy turned baseball phenomenon.

But on Friday a new chapter could be written into the mythology of Rodriguez’s ascension from future star and Seattle fan favorite to Major League Baseball’s next superstar.

Regardless of what he’s accomplished — including a first season that exceeded all expectations (except perhaps his own) and makes him the obvious choice for the American League Rookie of the Year, while leading the Mariners to the postseason for the first time since 2001 — the intensely scrutinized stage of the playoffs separates the good, the great and the elite.

Analysis: Breaking down the Mariners’ wild-card series vs. the Blue Jays

TORONTO — Breaking down the Mariners’ American League Wild Card Series against the Blue Jays, which starts Friday in Toronto.

Ty France: After a blazing start to the season — a .316/.390/.476 slash line in his first 70 games — that saw him make the AL All-Star team, France cooled off significantly in the second half. The combination of nagging injuries, timing issues and an over-aggressive approach, dropped his numbers to .276/.340/.437 with 20 homers and 94 RBI.

Adam Frazier: With Toronto expected to start all right-handed pitchers, Frazier will get the start over Dylan Moore. It’s been a disappointing year for him going into free agency. He’s posted a .238/.301/.311 slash line with three homers and 42 RBI. He came into this season with a career .281/.344/.412 slash line.

Whit Merrifield Jr.: The veteran utility player will likely see playing time over Cavan Biggio and Santiago Espinal, who has been out with an oblique injury. Merrifield, who was an All-Star with Kansas City, has struggled. He’s had a .281/.323/.446 slash line with five homers and 16 RBI in 44 games since joining the Jays.

TORONTO — With their first playoff game since 2001 looming later that evening at the Rogers Centre, the Mariners set their postseason roster Friday morning with no major surprises.

The roster includes 12 pitchers — four starter and eight relievers — with 14 position players. The Mariners kept all three catchers on the roster, knowing that Cal Raleigh’s thumb is still a lingering issue and with the improved hitting of Luis Torrens. Seattle was considering the possibility of putting outfielder Cade Marlowe, who has never played above the Class AA level, on the roster as a pinch-runner and defensive replacement, and carry only 11 pitchers.

But the Mariners opted to keep their bullpen largely the same for the series.