The far end of the feather-shaped room comes to a point where an odd chair shaped like an egg cut in half sits against the back wall and a small couch sits facing the lockers reserved for Mariners players with the most major league tenure. It’s away from the congested couches in the middle of the clubhouse, the path being worn to the showers and the entrance where media and non-baseball staff gather in the mornings. 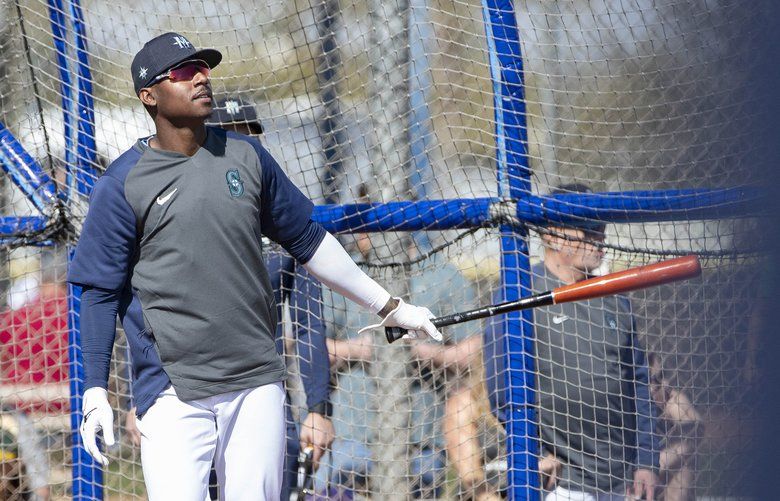 It’s a semiprivate oasis in the clubhouse chaos.

Robinson Cano assumed control of the area when the new clubhouse opened in his first year after signing a $240 million contract. Nelson Cruz took up residence two lockers down when he signed a year later. The duo ruled the area for the next four spring trainings, even allowing the moody Jean Segura to inhabit in their little fiefdom. Last spring, with Cano traded to the Mets and Cruz signed to the Twins, Felix Hernandez moved into the vacant spot for his final spring in Peoria.

Fittingly, that spot belongs to Seager — the longest-tenured Mariners player on the roster.

He can only shake his head in disbelief at the notion.

“I always had Felix,” he said. “I always had that crutch. I didn’t get these questions. It was always, ‘You are one of the longest,’ but now with Felix being gone, that hurts me a little bit. It’s definitely strange. It’s humbling. I’m proud to be up here for about 9½ years. The longevity of the situation is something I don’t take lightly.”

Seager was selected in the third round of the 2009 draft out of North Carolina. He made his Mariners debut July 7, 2011. He took over as their third baseman in 2012 and has remained there since, signing a seven-year, $100 million contract extension that runs through next season. He’s played 1,261 games in a Mariners uniform.

He’s been part of 100-loss teams and forgettable, mediocre teams. He’s been part of multiple teams that fell achingly short of the postseason, and now he’s part of a rebuilding plan, playing with kids who are at least five or six years younger than him.

“Yeah, it’s completely different,” he said. “It was different last year. You have to embrace the change. We understand the business aspect of it. If something’s not working, you have to make changes and do what’s best for the Mariners.”

He doesn’t begrudge general manager Jerry Dipoto or ownership for making the decision. Pragmatism comes with seasons and age.

“You want to be in a situation where you’re competing to win and playing for the postseason and trying to win a championship,” he said. “That’s the end goal for everybody. But when we were doing that, we didn’t make the playoffs. We came up a little short. The reality of the situation is we didn’t do what we were supposed to do there. So you can understand the rebuild. If it’s not working, you build from the ground. You try to draft well, you trade guys. That’s the nature of the beast.”

He’s seen so many teammates traded away, one after the other. And there was a time this offseason that he thought might be the next established player moved for salary relief and/or prospect return.

Given the free-agent market for third basemen and the elevated asking price for Josh Donaldson, a handful of teams contacted the Mariners about possible trade scenarios for Seager.

Seager, who doesn’t use social media, heard the rumors through his wife, Julie, who keeps tabs.

“It is amazing that any time anything happens with the Mariners, she knows before I do,” he said. “I definitely saw my name and I heard the rumors. You are around long enough, you kind of understand the business side of it. And that’s the reality of the situation. As much as we can get invested in a city or love a place, you are just a piece of the puzzle and you have to take all of that for what it’s worth.”

He knows he’s not part of this rebuild and that he could still be traded.

“In all fairness, I could’ve been traded five minutes ago and Julie would still know before I do,” he said. “It’s a definite possibility. It’s something that if it happens, you deal with it and you make the most of it. Ultimately, they have to do what’s best for the Mariners and that’s bigger than any one person, period.”

But the well-known hindrance to a potential trade is the clause in his contract that turns a club option of at least $15 million, and up to $20 million based on performance, into a player option if he’s traded to another team. Baseball agents and executives have labeled it a “poison pill.” The Mariners would have to eat a fair amount of that option year to make a deal. For Seager, it was a bit of control for his contract extension because he didn’t have a no-trade clause.

“That’s absolutely the reason,” he said. “There are always little things that guys try to get in where you have a little bit of control in your life. It could still happen at any time. I don’t have a no-trade clause. You want to have a little bit of say or as much as you can, so when the time comes that maybe you get a phone call or something. I didn’t get any phone calls this winter.”

Instead, Seager focused on adding some muscle to his trimmed-down frame from last season while remaining in Seattle. He worked out at Athletic Training Institute in Bellevue.

“I was able to implement a little bit more where the year before was cleaning everything out of me basically and getting rid of all of the junk that I had accumulated,” he said. “This year I was able to actually kind of lift a little more and get back into the gym that I liked a little more.

After an injury in spring training required surgery and derailed the beginning of last season, Seager closed strong, posting a .260/.339/.524 slash line with 13 doubles, 17 homers and 45 RBI in 68 games.

“That was frustrating because you put in a lot of work and then to have to sit for two-plus months or whatever it was,” he said. “The second half especially was really encouraging. My body felt better throughout the season. I didn’t get as stiff and tight and have the aches and pains that I had in years past. I think the one thing that I kind of wanted to keep elaborating on was I wanted to get back and get stronger again.”

If he carries that over to this season, the longest tenured Mariner might not be one by the All-Star break.