As the 2020 Major League Baseball season reached its final days, and the competition grew one-sided in favor of Kyle Lewis, it became clear the Mariners’ young center fielder should win the 2020 Jackie Robinson American League Rookie of the Year award.

The only possible drama between the end of the season and the award announcement seemed to be the margin of his voting totals over the other two finalists — outfielder Luis Robert of the White Sox and Astros pitcher Cristian Javier.

The outcome was decisive.

Watching the show with a large group of family and friends from his parents’ home in Georgia, Lewis burst into a wide smile when Cal Ripken Jr. called out his name as the winner while cheers erupted around him. He felt the emotion of it all.

“It just means a lot,” Lewis said via video conference. “Seeing my family and the road of highs and lows in the minor leagues, the highs and lows of major leagues, success, struggle and injury and all that. When you get these milestone moments, I think it is because of the overwhelming rush of emotion sometimes. My family was around and seeing them so proud and you know so nervous watching the TV. A lot of those things piled up.”

Lewis becomes the fourth Mariners player to earn rookie of the year honors. Alvin Davis was the first in 1984, while Kaz Sasaki (2000) and Ichiro (2001) took home the honors in back-to-back seasons after coming to the United States from Japan’s Nippon Professional Baseball. 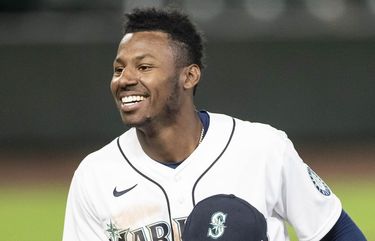 For Lewis, having two African American players win the award in the same year was special, particularly given the namesake of the award and what he meant to the integration of Major League Baseball.

“It’s really special and that’s something I don’t take lightly,” Lewis said. “When I was watching the show, I watched Devin Williams. And I have a lot of pride in that. We were able to be on a call together about being black in baseball. And it’s really special to see another young brother come up and perform at a high level. It’s something we take a lot of pride in. I just want to set that example, set that table, for guys who want to reach out to me and ask questions. I want to be open. The more I’m able to expand my platform, and use that platform in the right way is really special and I know it’s special for him too.”

Lewis finished the 2020 season with a .262/.364/.437 slash line* with three doubles, 11 homers, 28 RBI, five stolen bases, 34 walks and 71 strikeouts in 58 games. He was named the Mariners’ most valuable player by the Seattle chapter of the Baseball Writers’ Association of America.

Lewis has racked up postseasons honors from various outlets following his strong season. He recently was named the American League’s most outstanding rookie by the Major League Baseball Players Association in its 2020 Players Choice awards. He also was named the AL Rookie of the Year by The Sporting News and Baseball Digest.

But the success this season and the resulting accolades, including the highest honor for a rookie, are the culmination of hours upon hours of work to overcome the adversity of a gruesome injury and all the precious time lost because of it.

The Mariners’ first-round draft choice (No. overall 11) in 2016 out of Mercer University, Lewis was off to a strong start to his first professional season with the short-season Everett Aqua Sox. He had slash line of .299/.385/.538 with eight doubles, five triples, three homers and 26 RBI in his first 30 games. After a slow start, he was hitting .364 with a 1.114 OPS over the final 20 games.

But his season and his development came to a painful halt on July 19.

In the seventh inning of a game against the Tri-City Dust Devils at Everett Memorial Stadium, Lewis was trying to score from second on a single. As he neared home, the catcher came up the line to field a throw. Trying to avoid a major collision, Lewis took an awkward step while trying to slow down. His right knee buckled and he felt a pop and then seething pain while ending up on the ground. He’d suffered a torn anterior cruciate ligament, torn medial and lateral meniscus.

After moving near the Mariners’ spring training complex in Arizona and religiously rehabbing the knee to full strength, Lewis returned to the field on June 11, 2017. In his first official game of his return with Class A Modesto, Lewis slammed the surgically repaired knee into the outfield wall while trying to make a catch. He suffered a bruised knee that would lead to further complications down the road. Complications from the surgery and the bruised knee hampered Lewis throughout the remainder of the 2017 season. He played in 49 games, hitting. 257 with a .740 on-base plus slugging percentage, six doubles, a triple, seven homers and 31 RBI.

The Mariners planned to have Lewis make up for the missed time in the Arizona Fall League in 2017. But recurring discomfort with the knee limited him to just two games. The Mariners decided to shut him down from games and allow him to rest and later prepare for spring training. They decided not to give him an invite to MLB spring training in 2018, wanting him to focus on being ready for his minor-league season. However, the knee pain returned as Lewis ramped up his workouts in preparation for spring training. He eventually opted for another surgery — an arthroscopic clean-up of the knee. The procedure provided relief and he was able to return to the field on May 12 of that season.

“I always believed I would find a way back,” he said. “I think naturally doubt kicks in sometimes when you’re dealing with things. You can’t see the future, you can’t see the light at the end of the tunnel and sometimes it got dark, but I tried to just keep it day by day.”

But 2019 provided his first uninterrupted season. He was invited to MLB spring training — his first — and then put together a solid season with Class AA Arkansas, posting a .263/.342/.398 slash line with 25 doubles, two triples, 11 homers and 62 RBI. He was called up to the Mariners in September and hit homers in each of his first three games and six total homers in his first 10 games.