In just two pitches in the fourth inning Friday night, the Mariners saw their future come to life.

Those two slump-busting hits for the team’s two prized young players and a bounce back pitching performance from Chris Flexen were enough to power the Mariners past the Kansas City Royals 4-1 in front of 24,206 at T-Mobile Park Friday night.

“It was great to see those guys sticking to what they’ve been trying to do and see the ball land tonight,’’ said Kris Negron, serving as manager with Scott Servais still absent due to COVID-19.

Both hits, each to right-center. came on four-seam fastballs from Royals starter Brad Keller, who had allowed just two earned runs in 16 innings this season before the fateful fourth Friday.

The double was especially sweet for Rodriguez, whose recent spate of strikeouts — six in his last 13 at-bats before Friday, several on questionable calls — had become a point of discussion.

Rodriguez talked to a group of reporters before the game and insisted the slump wasn’t getting him down, saying with his trademark smile still intact that “it’s going to come around. I guarantee you that.’’ 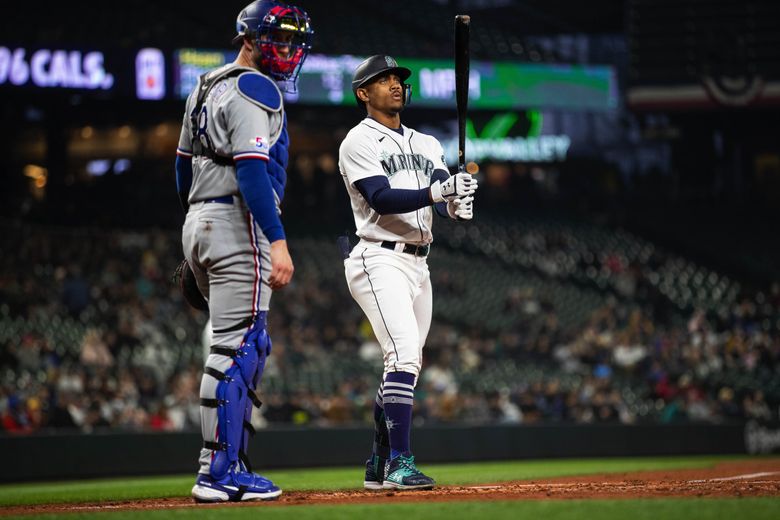 Julio Rodriguez has struck out plenty to begin his career with Mariners. It’s not all his fault.

As sports guarantees go, maybe it won’t go into lore like Joe Namath’s before Super Bowl III. And one game hardly a turnaround makes.

But considering the expectations that greeted Rodriguez to start the year and the struggles of the first two weeks it felt like a pretty significant step in the right direction.

Before the double, Rodriguez was 6 for 45 on the season with two RBI and only one extra-base hit, a double in his second game at Minnesota on April 9. He got two hits Friday night, also reaching on an infield single in the eighth, for the first multi-hit game of his career. His two-run double also snapped a 1-28 skid when he had two strikes.

Kelenic was 6 for 40 for the season and 3 for 21 on the homestand with four RBI before his triple.

Each hit came after the Mariners got a big break — a fielding error by Keller on a grounder from Abraham Toro that potentially could have been an inning-ending double play. The Mariners had runners on first and second at the time following singles on soft loopers to the outfield by Eugenio Suarez and J.P. Crawford with one out.

The error was the first of the season for the Royals, whose streak of 11 consecutive games without an error to open the season is an American League record.

Toro’s went off the glove of Keller, with Toro beating out a throw from Adalberto Mondesi to load the bases.

“You’ve got to be able to take advantage of those situations,’’ said Negron.

Rodriguez worked the count to 3-2, just as he had in the second inning, when he flied out to center.

This time, Rodriguez got a little more juice on it and his drive dropped just to the left of the sprinting Taylor, scoring Suarez and Crawford.

Kelenic followed on the next pitch with a drive to almost the same spot of the park, but a little further, again just escaping Taylor’s glove and bouncing off the wall.

Toro and Rodriguez scored as Kelenic raced for a triple — the second of his career — snapping a 3-21 skid on the homestand.

Rodriguez, whose locker is next to Kelenic’s in the Mariners clubhouse, said he felt as good for Kelenic as he did for himself.

That was all the scoring the Mariners would get.

But that was all they would need thanks to Flexen.

Flexen labored some during his first two starts of the season, giving up 10 hits and six earned runs in 10 1/3 innings, both losses in which the Mariners were shut out, becoming just the 19th pitcher in the majors to begin a season with his offense shut out in his first two starts since 1995 and the first Mariner ever.

But he looked like the Flexen of much of 2021 — when he went 14-6 as one of the surprise players of the season — from the start Friday.

“He had all four of his pitches working,’’ Negron said. “But his fastball command was really good.’’

His only real mistake was a hanging changeup that Salvador Perez clubbed over the left-field wall for a solo homer in the sixth for his fifth homer of the year. It was also the fifth straight game at T-Mobile that Perez had homered, having done so in all four games of a series last August.

Flexen left after seven innings and 84 pitches, allowing six hits and one run with five strikeouts and no walks. Right-hander Anthony Misiewicz then came on and pitched a scoreless eighth and Andres Munoz the ninth to get his first save of the year.

The game also proved a nice bounce for the Mariners, who were coming off a sloppy and disappointing 8-6 loss to the Rangers on Thursday night in which they blew a 5-0 lead, in part due to committing a season-high three errors.