OAKLAND, Calif. — With Jarred Kelenic returning to the big leagues after the All-Star break and Jake Fraley returning from a 15-game stint on the injured list, Jake Bauers knew his playing time might suffer through roster construction and the passel of left-handed bats on the team.

Add in some struggles at the plate, his playing time decreased after being acquired from Cleveland in early June to serving as a bench player starting in mid-July.

With Jose Marmolejos hitting well with Class AAA Tacoma, Kyle Lewis possibly returning in a few weeks and several established players being waived or released, it would’ve been fair for Bauers to wonder about his place on the team.

On Monday, he became the latest player to play the late-inning hero in this season of ridiculous rallies.

With two outs in the top of the ninth, Bauers, who was starting just his fourth game since Aug. 4, provided the game-winning hit in the Mariners’ stunning 5-3 win over the Oakland A’s. 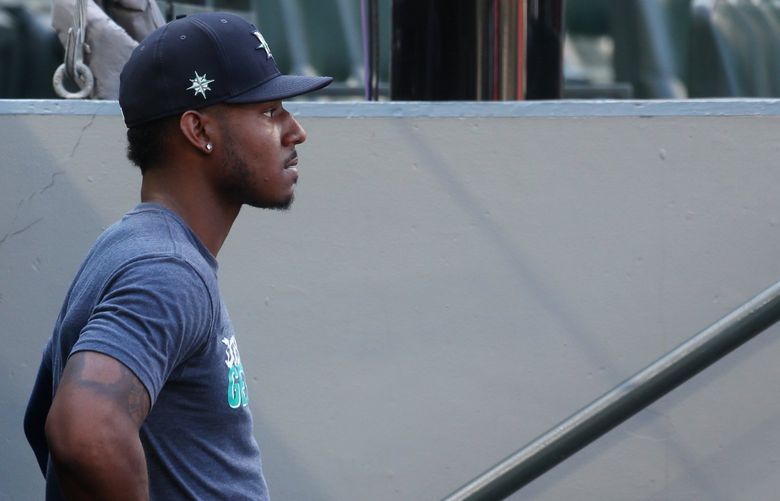 The Mariners, who improved to 68-58, have won their last four games against the A’s. Oakland (70-56) has lost seven of its last nine, including the last three games in eighth inning or later. The Mariners sit just two games back of the A’s in the wild-card standings and three behind the Red Sox.

“Just another ‘Mariners victory’” manager Scott Servais said with nod to their penchant for drama. “It’s been crazy. It’s just the number of late-inning, come-from-behind wins, we’ve had here throughout the year but certainly on this trip. These games are fun; they’re exciting.”

Facing Oakland’s hard-throwing closer Lou Trivino, Bauers displayed the approach of a player that’s had everyday at-bats, delivering a pretty piece of hitting on a 2-2 changeup that leaked off the outside corner of the plate. He stayed on the pitch instead of trying to crush it, delivering a simple swing that produced a crisp line drive into left-center.

“Really, I was looking for a heater, obviously, it didn’t come,” Bauers said. “I kind of swung over that changeup on the first pitch and then from there, I had to get a little bit more selective. I took that curveball in the zone and I took the 1-2 fastball up and off. He’d already thrown me two change-ups already, so I had a pretty good idea of what it looks like coming out of this hand. He kind of left it up, and I was able to ride out that swing and get it to the left side.”

A once-heralded prospect with the Rays, Bauers is on his third team and hasn’t quite lived up to expectations. Coming into the road trip, he was in a stretch of 10 games where he had a .095/.208/.095 slash line with just two hits in 24 plate appearances.

“You try to find as competitive environments as you can while you’re not playing,” he said. “It’s a mental grind, trying to stay in it, trying to stay ready every day. I’ve got good coaches around me, good teammates; they make it easy to show up every day. All you can do is keep working and wait for these opportunities. When you get them, you can’t miss.”

Servais thought Bauers might have a good game after throwing him batting practice. Bauers had a hit off Kendall Graveman on Sunday and three others on the road trip.

“Sometimes the pregame work kind of tips you off, and which guys are feeling good.” Servais said. “He was excited. It was a good opportunity to put him in there tonight, and he responded. I’m happy for him.”

The Mariners don’t have that chance without Ty France, who has been their best player for the last month.

Down 3-2 and going into the top of the ninth, France stepped to the plate to lead off the inning. France stayed on a fastball way from Trivino, sending a line drive over the wall in right-center to for a game-tying solo homer. It was his fourth homer in his last five games.

It was the second straight day the France tied the game in the ninth inning with a homer.

It sent the few A’s fans in the announced crowd of 4,140 — the lowest of the season — into a spasm of boos and jeers at Trivino, who blew a save in a loss to the Giants on Saturday.

That displeasure would only grow as Abraham Toro followed with a single up the middle and Jake Fraley smacked a double off the wall in left-center that just missed being a home run.

With runners on second and third, Trivino seemed poised to keep the game tied and give his teammates a chance to win it in the ninth when he struck out Jarred Kelenic and Cal Raleigh.

It brought Bauers to the plate.

“I think my swing has been getting closer and closer every day,” he said. “Whether it’s looking at video at the hotel or just thinking back on when I felt like I was going good and what that felt like and what that looked like. Something clicked in Houston where my swings in BP started feeling back, and it started feeling good.”

The Mariners got a solid start from lefty Marco Gonzales, who would love to have just two pitches from his outing back. If they had been in a little different location, the rally might not have been necessary.

“It’s truly a chess match with these guys,” he said. “Their core five or six guys that are always in there, it’s just seeing them a lot. They’ve seen me a lot. I thought we executed our plan really well, tonight. And really, it always seems like it’s a couple pitches. That’s the difference with these guys.”

He got down 1-0 early in the outing. Mark Canha led off the bottom of the first with a single, advanced to second on Matt Olson’s single and stole third. It allowed him to score on Yan Gomes’ ground out to second.

The A’s pushed the lead to 2-0 in the fourth inning when Gonzales got up 0-2 on Gomes on the first two pitches of the at-bat. After being unable to put him away on the next three pitches, Gonzales left a 3-2 changeup over the middle of the plate that was turned into a deep solo homer.

The Mariners had just three singles off A’s start Paul Blackburn in five innings. In the sixth, J.P. Crawford led off with a single and Mitch Haniger followed a deep blast over the wall in left-center. The game-tying two-run homer was Haniger’s 29th.

The other regrettable pitch from Gonzales came in the seventh inning. He hung a curveball to Olson, who launched it over the wall in right-center for a solo homer.

CORRECTION: This story has been updated to reflect that Jake Bauers’ two-run single occurred in the top of the ninth inning, not the bottom of the inning as originally reported.