At 8:34 p.m. Friday, Pete Fortune emerged from the laundry room in one corner of the Mariners clubhouse and began to pace the hallways. Nervous?

Fortune is one of the only Mariners employees who has felt this feeling before. Not many know what it is. Even fewer remember what it’s like, this mixture of anticipation and anxiety and uncertainty.

“I’ve been having flashbacks to the good ol’ days,” said Fortune, who was 18 years old when he became a Mariners clubhouse attendant in 1985.

He’s never left. He is, in his words, The Laundry Guy. It’s his job to make sure players’ uniforms are clean and tidy — he was the guy who for years hand-scrubbed the pine tar off Jay Buhner’s pants after every game — and he is, pardon the pun, as much a part of the fabric of the Mariners as anyone.

“Oh yeah, I remember 1995 in the Kingdome,” he said, recalling the Mariners’ first playoff berth. “That was crazy.”

The 40 or so staffers here inside the Mariners clubhouse at T-Mobile Park are preparing for another crazy night. 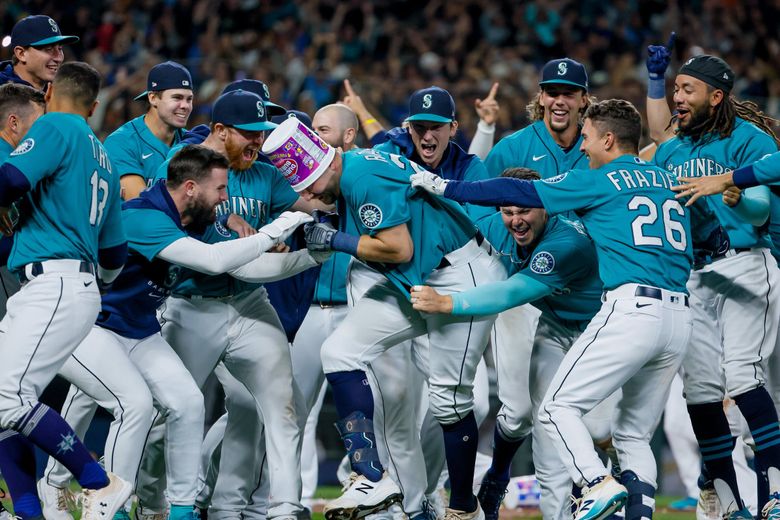 It’s the fifth inning, the Mariners and A’s are tied 1-1 in the game unfolding out on the field, and Juan Rodriguez and his operations staff will spend the next hour scrambling to erect four walls of plastic sheeting, creating a protective incubator for the team to celebrate a party 21 years in the making.

At least, that’s what everyone in here hopes will happen, if the Mariners can clinch a playoff berth.

Problem is, if the Mariners don’t win, the operations staffers will have just a few minutes to tear down everything they just constructed — knowing they might have to do it all again the next day.

Yes, Rodriguez said, he knows all that is a possibility. But he doesn’t want to have to think about that right now.

“There are a lot of moving pieces, but it’s a good problem to have,” he said.

For two days, the 96 bottles (*wink wink*) of Domaine Ste. Michelle Champagne have been chilling inside a walk-in refrigerator behind the clubhouse. A couple hours before first pitch Friday, Melinda Johnson and Paula Shilley helped pack the bottles into four large rolling coolers filled with ice.

At 9:12 p.m., Johnson and Shilley rolled the coolers into the kitchen adjacent to the main room of the clubhouse. A moment later, Jordan Larson rolled in the first of three coolers filled with cold Corona Extra cans. There are 456 cans of beer here. (Yes, Larson said, he counted them.)

A small team of clubhouse assistants — Johnson, Shilley, Larson, Chris Sterback and Cayleb St. Laurent — soon start tearing off the foil covering the tip of the bottles. How many bottles, exactly? Well, MLB’s operation manual mandates teams can have 96 bottles of Champagne to celebrate. Why 96, no one is quite sure. But there are absolutely, definitely not 200 bottles of Champagne chilling right here on ice ready to pop.

Now the Mariners, with the score still tied 1-1 in the eighth inning, just need to give everyone a reason to pop ’em.

Earlier in the week, Chris DeWitt reached out to other “clubbies” he knows with the Dodgers and Astros. Playoff berths have become routine for those teams, and DeWitt wanted to know what to expect with the clubhouse celebration.

“Having never done this before, I just wanted to know: What’s the right way to do it?” said DeWitt, 39, a Mariners clubhouse assistant since 2006.

DeWitt and the clubhouse crew had been in several meetings with Rodriguez and his operations team throughout the week, and then more throughout the day Friday. They worked through various scenarios, but that doesn’t make the preparation any less stressful now, especially with how the game is unfolding.

“We just want to make sure it’s perfect for the players,” DeWitt said. “This is all about our players and coaches. They put in all the work. We’re just here for the backgrounds stuff so all they have to do is worry about baseball. That’s our biggest goal.”

Because of a typical delay in the game broadcast, it takes about 10 seconds for Johnson and Shilley to see what the roar is about on the TV mounted in the kitchen. Then there it is: Cal Raleigh just hit a storybook home run with two outs in the bottom of the ninth inning, giving the Mariners a 2-1 victory and ending the franchise’s 21-year playoff drought.

They quickly got back to work, pushing the coolers into the center of the team clubhouse and putting the finishing touches on the preparation for the celebration about to hit the room.

At 9:35 p.m., the first group of players leave the home dugout and run up a ramp leading into the clubhouse. They’re all wearing blue “October Rise” T-shirts.

By 9:42 p.m., some 100 players, coaches, front-office executives and support staffers have gathered inside the plastic incubator, packed around a covered pool table in the middle of the 75-foot-by-25-foot room.

Just as manager Scott Servais is out to give a toast, Julio Rodriguez, the rookie star, popped the first Champagne bottle, prematurely. A collective groan rises from teammates. Is he even old enough to hold that bottle!?

Servais gave his short toast, followed by another from veteran pitcher Robbie Ray.

Then — goggles up, everyone — the customary Champagne sprays filled the air, a collective release of two decades of frustration. For most in the room, it was their first time.

Just as the bottles popped, one wall of the plastic sheeting collapsed, exposing a handful of players’ lockers.

“Immediate fail,” one of the clubbies said later.

It was the only obvious hiccup during an otherwise historic night for the franchise, and for a city eager to back a winning baseball team again.

A few minutes later, relief pitcher Erik Swanson inspected the wet mess in and around his locker. He shrugged.

“Worth it,” Swanson said.

By 10:06 p.m., the bottles had all been popped. The beer cans were running out too. That’s when Fortune emerged from another corner of the clubhouse holding a small pile of paper cups and a large bottle of Crown Apple Whisky. His M’s hat turned backward, he walked around the room offering up shots to anyone interested.

“Sometimes,” he said with a smile, “I’m the bartender too.”

By 10:17 p.m., the room was largely cleared out. Players, coaches and staffers had returned to the field to watch the fireworks show, leaving only scattered puddles of beer and champagne on top of the plastic floor. The operations crew immediately got to work on the cleanup, the whir of the wet vacuum drowning out the fireworks outside.

By 1:30 a.m. Saturday morning, his work for the night complete, DeWitt was able to sit down in one clubhouse office and finally watch the last two innings of the game on his iPhone.

Yes, he said, the night turned out just about perfectly.

Let’s do it all again next week, shall we?