PEORIA, Ariz. — As they watched James Paxton go into that unique delivery they’d seen so many times before, firing fastball after fastball — all of them sitting around 92-93 mph — a feeling of excitement surged through Mariners general manager Jerry Dipoto, assistant general manager Justin Hollander and manager Scott Servais.

But with each pitch, fatalism started to creep into their minds. There was no chance they’d get him back in a Mariners uniform.

It was late November and scouts from more than 20 major-league teams traveled to the Athletic Training Institute in Bellevue to watch the big lefty throw a bullpen session to show he was healthy.

“It was ‘The Big Maple,’” Servais said in a Thursday-morning video conference. “I mean, it was coming out hard. He threw all of his pitches. He probably threw, I would say, 45ish pitches that day. I think after the first 10 or 12, I said, ‘This guy’s ready to roll.’ He was very focused. When I walked out of that bullpen session with Jerry and Justin, I didn’t know what kind of chance we had of signing him.” 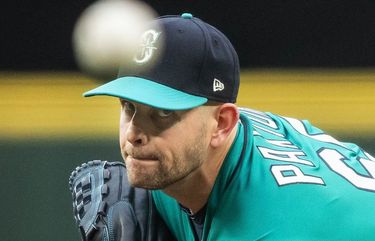 On Thursday, the team officially announced what had been known the previous few days. Paxton was coming back to the Mariners on a one-year major-league contract. He arrived in Peoria on Monday, cleared COVID-19 intake testing and passed his physical to sign a deal that will pay a base salary of $8.5 million with incentives that could push it to $10 million.

“There were a lot of teams interested in signing me this offseason,” Paxton said via video conference. “I really thought hard about it, and I think that coming back to Seattle was the best long-term decision for me looking forward in my career and what I want to do. I want to get back to being myself this year. I really struggled last year coming back from the back surgery, and I’m comfortable here in Seattle. I love the group here, and I’m excited to be part of it.”

Even the usually optimistic Dipoto admitted he wasn’t high on the Mariners’ chances after that bullpen session. Paxton simply looked too good and too expensive.

“Really couldn’t have been more impressed,” Dipoto said. “He was in wonderful physical condition. I don’t want to be cliché, but it was the best shape I’ve ever seen him. He looked great. He was throwing in the low 90s with great plane and looked absolutely free, which is notable because that’s not a typical thing for a major league pitcher at that time of the year.”

Dipoto knew most of the other scouts in attendance and understood they saw the same thing.

“Teams sent their best evaluators to come watch him throw,” he said. “But our impression is going to be a little bit different because our level of trust in James, knowing his work ethic, knowing just how much James invests in his preparation is something that we have a more intimate understanding of than most teams. We may have walked out of there with more comfort than any other team.”

So how did they end up getting Paxton on what could be a team-friendly contract if the big lefty stays healthy?

“We were fortuitous,” Dipoto said.

Dipoto isn’t working with an unlimited payroll this season. But Paxton’s history with the team did factor into it.

“As in any other year, we are like 30 teams operating with a payroll budget, and we were able to manage this within our payroll budget,” Dipoto said. “Having said that, one or multiple owners in our executive-level group checked in to see what James’ market looked like throughout the offseason. He’s a known commodity. He is a top-of-the-rotation-type starter when healthy, and we believe he is. And our owners as a result, we’re consistently checking in.

“When you play in one place for as long as James has, you build relationships. The general consensus was that this was a good move for us if we if we could manage it within the confines of our budget, and we were able to do that.”

Despite their initial doubts, the Mariners continued to check in with Paxton’s representatives from the Boras Corporation. His market was still evolving. There was no reason not to maintain contact and keep their intentions and price point known. It escalated to “serious talks” about a week ago.

“One of the big benefits for us is how much James wanted to play in Seattle,” Dipoto said. “I don’t think there’s any question that we were the benefactors of some form of hometown discount on this. He wants to be a Mariner. He wants to be here. That pushed this along quite a bit and allowed us to access a pitcher who we think, with the talent that he brings to the table, fits us perfectly.”

As part of the rebuild, the Mariners traded Paxton, who was coming off a two-year stretch where he posted a 23-11 record in 52 starts with a 3.40 ERA and 364 strikeouts in 296 1/3 innings, to the Yankees after the 2018 season for three prospects, including current big leaguers Justus Sheffield and Erik Swanson.

He finished with a 15-6 record with a 3.82 ERA in his first season with the Yankees despite persistent back pain in his final three outings. After failed rehabilitation attempts and a failure to identify the cause, he underwent a microscopic lumbar discectomy with the removal of a peridiscal cyst in February.

With the Yankees set on a World Series, Paxton pushed to get back as soon as possible. It was a mistake.

“Going into summer camp last year, I thought that I was OK,” he said. “But looking back now and looking at my mechanics, my back leg just wasn’t getting off the rubber very well, and it was making my arm drag behind me. Everything was just moving slow because of that. It actually put my arm in a dangerous position and that’s what I think caused the injury to my flexor was just my mechanics being off and not having my strength back to 100%.”

An offseason focused on rebuilding leg and core strength and relearning his mechanics have him ready for 2021.