PEORIA, Ariz. – The man-child has returned a man.

Once a heralded and hard-throwing pitching prospect expected to be part of a pitching trio that would lead the Mariners to successes they’ve still yet to achieve, Taijuan Walker has returned to the place and team where his career as a professional baseball player all started.

As he went through the first day of workouts Thursday, his size, athleticism and even his gait offered a reminder of that precocious kid who was invited to his first big league camp back in 2012. 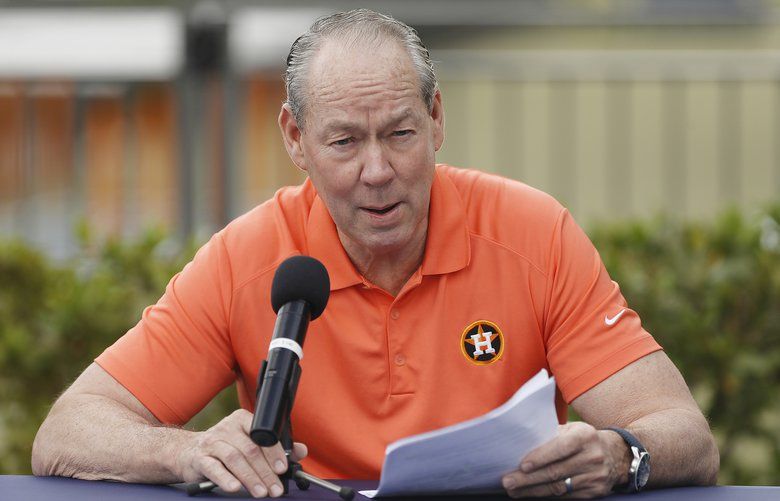 The uniform and the number on the jersey (No. 99) are different now, and so is Walker. At age 27, with seven seasons of major league experience — the last two limited by serious injuries — he’s not surrounded by the concept of potential. For him, it no longer is about all he could be as a pitcher, which seemed so high in his prospect days, but simply what he’s trying to get back to being: healthy and productive.

In a camp filled with players who have less than a year of MLB experience — or none — and only Kyle Seager and Daniel Vogelbach around from his last season with Seattle, Walker can’t help but feel like an “old guy.”

Walker is coming off two seasons in which he pitched a total of 14 innings. A partially torn ulnar collateral ligament ended his 2018 season in April and required Tommy John surgery. A strained shoulder capsule submarined his comeback hopes in 2019. He threw just one MLB inning, in the final game of the season.

In Walker’s final year of arbitration eligibility, the Diamondbacks decided to not tender him a contract, making him a free agent. After receiving multiple offers and weighing the opportunities, he opted to return to Seattle. Being in rebuild mode, the Mariners offered him a locked-in spot to the rotation and the chance to regain his arm strength at a deliberate pace.

“I’m comfortable here,” he said. “I haven’t pitched in two years, so I wanted somewhere where I can come in and kind of take my time. I don’t have to rush. I don’t have to really go out and prove anything in spring training, just get a good game plan in, take it easy through spring.”

Another major factor was Kyle Torgerson being hired this offseason to be the Mariners’ head athletic trainer. Torgerson was with the Diamondbacks prior to joining the Mariners and worked with Walker during his health issues.

“I was with him two years rehabbing,” Walker said. “I’m comfortable with him. He knows my body. He knows what I have to do to stay healthy. That was a big part of it, too.”

Walker wasn’t certain what caused the capsular strain a year ago, but the shoulder is now pain-free.

“I’m 100% right now,” he said. “I’ve thrown four bullpens. I’m letting it go pretty good. Now it is just about being smart about it. I feel like I could go out and pitch in a game if I needed, but we are going to get a game plan and go from there.”

Walker has even adjusted his throwing motion in hopes of offsetting future problems.

“My arm motion was pretty long when I hurt my shoulder coming back from TJ (Tommy John surgery),” Walker said. “We just tried to shorten it up and see what it felt like. It felt really comfortable from the start. It took about a week for me to get it down and from there it felt effortless and normal.”

The Mariners are in the midst of setting up Walker’s throwing progression. Manager Scott Servais suggested it might be a little different than the other four starters projected for Seattle’s opening day rotation.

“We’ll be cautious,” Servais said. “He’s probably not at the level some of our other guys are, coming off injury. He has been throwing bullpens and feels good. But we’re not going to just go pedal to the metal, run him out there as fast as we can. He’s ready to go, we’ll build him up, get him stretched out and I’m excited to have him back. He’s happy to be back.”

When Walker was traded to the Diamondbacks on that night before Thanksgiving in 2016, he left as a pitcher admittedly lacking the maturity to understand how to achieve his lofty potential.

“I had a lot of stuff to learn,” he said. “I don’t think I did very good job here of doing what I need to do become the best pitcher I could be. I definitely slacked off and just didn’t put the work in.”

A new environment with the Diamondbacks, and a group of veteran starters, offered enlightenment.

“I was the new guy, so I wanted to fit in,” he said. “I didn’t want to be the standout guy who wasn’t working, was lazy and stuff. I couldn’t really slack off. We had good vets that kept on me — just having Zack Greinke over there, a bunch of guys who were really hungry and ready to work.  I just wanted to fall in line with them.”

That self-realization comes at different times for players. Walker’s came with time still left in his career.

“It was funny talking to Taijuan yesterday, the things that he’s learned since he’s been gone,” Servais said. “He’s learned a lot, like what to do and sometimes what not to do. The biggest message I put across to him is sometimes when you give a lot, you get even more back. And Taijuan has learned. He’s learned what it’s been like to be the No. 1-prospect-type guy, he’s dealt with some injuries in his career. He’s got a lot to offer our young players.”

Even at 27, with a body that feels like an old guy at times, Walker understands now more than he ever did in his first stint with Seattle.

“Now my focus wants to be helping the young guys come up,” Walker said. “If they have any questions, if I can help in any way, that’s kind of my goal now moving forward in my career.”