It’s all out there for Julio Rodriguez.

He’s about to take full ownership of the city of Seattle, which has a sports-idol vacancy with the trade of Russell Wilson and the pending retirement of Sue Bird. He is the right person at the right time. You can already see the adoration growing, one smile, one home run and one stolen base at a time.

The kid — and at 21, he’s still a kid, even if his talents are full-grown — has the sort of natural charisma that hasn’t been seen in these parts since, dare I say it, The Kid. Ken Griffey Jr., still the gold standard for Seattle sports superstars. Julio, like Griffey, is making baseball cool again. Julio, like Griffey, has the “it” factor that can’t be defined, and can’t be faked. You just know it when you see it. And Rodriguez oozes “it.”

And just as with Griffey, it feels like we’re going to have to share J-Rod very, very soon. He is on the verge of becoming a national presence. Rodriguez has the growing potential to be the elusive “Face of Baseball” — capital F, capital B — that the sport has sought for so long. 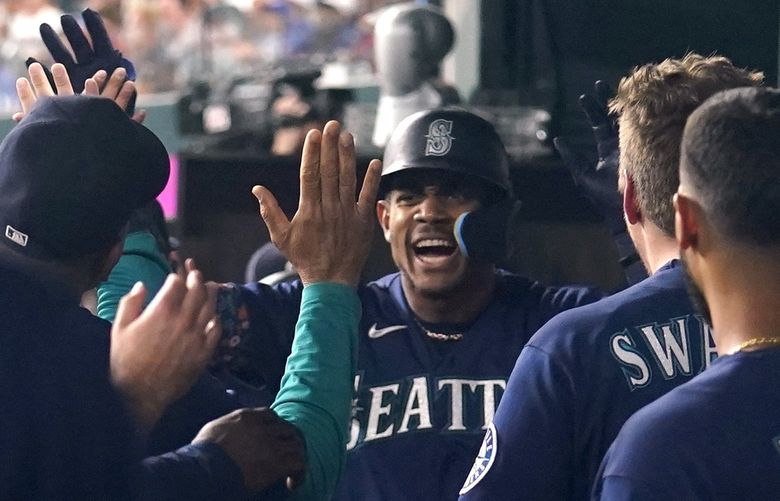 Mariners, Julio Rodriguez having a grand salami of a time to run win streak to 12 games

That will be dependent, of course, on Rodriguez taking that next step from a very strong rookie year into full-fledged superstardom. But have you seen anything that makes you think that ascension is not the natural order of things, and indeed happening before our very eyes? Every day, it seems, J-Rod does something on the baseball field that makes you simply shake your head in wonder.

Next week, Rodriguez takes his first step onto the national stage as the Mariners’ lone All-Star and a participant in the Home Run Derby. As manager Scott Servais said this week, “It’s Julio’s world, and we’re all just along for the ride.”

I don’t have any idea how Rodriguez will do in the derby; it’s an event that can bring the best sluggers to their knees. But I just have a hunch that he’ll rise to the moment as he has done so often. It could be the launching pad, not just for some tape-measure shots but for the legend-making machinery of our modern life — and it could be accelerated Tuesday in the game.

The moment is ripe for Rodriguez. If the Mariners can ride their hot streak into an actual playoff berth (and yes, we’ll all believe it when we see it, having been teased with the possibility too many times), the stage would be even brighter. Seattle is Julio’s town, and the Mariners are becoming his team.

And here’s the best part. He does it all in a genuine, unaffected way that is completely endearing. Rodriguez’s teammates are not put off by the rookie’s emergence; they are energized by it. Starting pitcher Robbie Ray, who has a veteran’s sensibility, marvels at how Rodriguez “plays the game the right way” — the ultimate old-school compliment.

Rodriguez is completely comfortable in his own skin, or at least certainly appears to be. Whereas Alex Rodriguez, another young phenom who took Seattle by storm, turned out to have more foibles than initially perceived — the persona was largely a facade, as was revealed over time — Julio Rodriguez seems much more authentic. It would be a shock if J-Rod turns into A-Rod.

The spotlight does not deter him; he seems to savor it and thrive in it. That separates Rodriguez even from Griffey, who bristled against the constant scrutiny that eventually stifled much of his trademark joy. It’s hard to see that happening to Rodriguez, who by all appearances loves being a superstar.

Of course, it’s still early in the game, and it’s all new and exciting. Let’s see what happens when the attention doubles, and redoubles, and then quadruples. And also when the inevitable nine-digit contract is bestowed (by the way — the Mariners should get on that).

But I would like to think Rodriguez is well-grounded enough to withstand the potential pitfalls of superstardom. As Times reporter Ryan Divish said recently when we were discussing J-Rod’s meteoric rise, the joy and exuberance comes from a good place.

And so far he has not wavered. Not when he was anointed as a potential Mariners savior while still in A ball, not during the Kevin Mather incident, not when he hit .206 with no homers in April, not when he was suspended after the Angels’ brawl for reasons still unclear and not when he took a nose-dive rounding second the other day to thwart a sure triple — he laughed as hard as anyone at the ribbing.

In many ways, baseball needs Julio Rodriguez, a bilingual star who exudes charisma and welcomes the attention. Everywhere he goes on the road this year, fans already scream his name — and he does the best he can to accommodate them.

The best player in the game, Mike Trout, is a nice guy and well-meaning, but simply not interested in embracing all facets of the role of the sport’s ambassador (which is fine; it’s not a job requirement). His teammate, the wondrously talented Shohei Ohtani, is a unicorn, doing things that no one in history has done; yet the language barrier makes it hard to embrace him totally.

Julio Rodriguez has the potential — and it’s still just potential — to be the whole package. Right now, he’s ours. But soon, he may be the world’s.