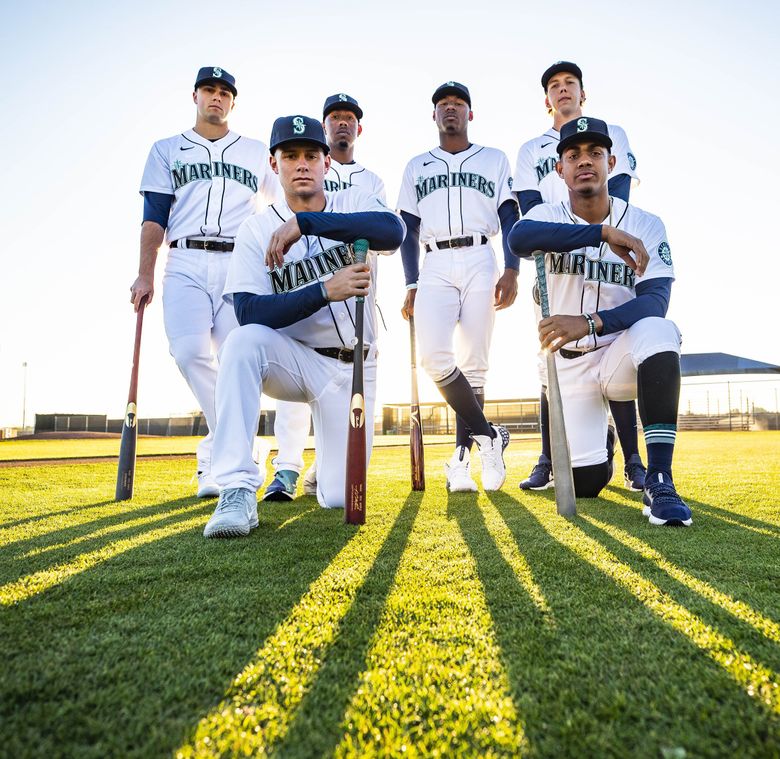 These rookies — left to right (back row) Evan White, Justin Dunn, Kyle Lewis, Logan Gilbert, (front row) Jarred Kelenic and Julio Rodriguez — are the projected core of the Mariners’ rebuild. While a shortened season throws a wrench into the plans, general manager Jerry Dipoto still sees plenty of opportunities for their growth this year. (Dean Rutz / The Seattle Times)

The unmistakable sound — not as jarring as a rifle blast but more intoxicating than a popped cork of celebratory Champagne — came first.

The crack of a 96-mph fastball striking the barrel of Evan White’s lacquered maple bat cut through the generic crowd noise being pumped through the speakers of T-Mobile Park.

The vapor trail followed — well, at least seemingly so, as the line drive rocketed over the fence in left-center, just high enough to clear the wall instead of putting a hole through it.

In Section 129 of the empty emerald-and-magenta ballpark, three of the four people largely responsible for the Mariners’ direction and decisions reacted accordingly. Their smiles were hidden by face masks, but it didn’t take a body-language expert to gauge the excitement.

General manager Jerry Dipoto, ever the optimist, talked with Mariners chairman John Stanton, who appeared to be keeping score for a four-inning game involving his own players. Meanwhile, the normally stoic Chris Larson, perhaps the most influential member of the team’s minority ownership group, uncrossed his arms and leaned forward in his seat — an animated response coming from him — and participated in the discussion.

But any excitement, or as much as could be taken from a scrimmage, reached another level after Kyle Seager singled to center and Kyle Lewis drove a fastball on the outside half of the plate about 20 rows deep in the right-field stands. The preposterous opposite-field blast was the fourth homer of summer camp for Lewis.

The impressive, no-doubt homers from two young players the Mariners believe are foundational to their current rebuild were mildly reassuring moments. Perhaps the only pang of disappointment for those three Mariners executives was a nagging feeling: “If only this were a real game.”

If not for baseball’s shutdown because of the coronavirus, the Mariners would have been in Baltimore on that Tuesday night, facing a team that, over the past five years, has been and likely will continue to be worse than the Mariners.

Instead, they finally get to open their delayed, 60-game season Friday night at Minute Maid Park against the defending American League-champion Houston Astros. Trash-can scandal or not, the Astros’ success is a main reason why Dipoto went to Stanton, Larson and team CEO Kevin Mather and asked to enact a three-to-four-year rebuild plan to:

The first two parts of the plan, often called a “step back,” much to Stanton’s displeasure, have been executed with better-than-expected success.

But the Mariners’ 2020 plans to give players lacking experience a full 162-game season to learn, succeed, fail and rebound went awry due to the 3½-month shutdown, a shortened 60-game season and a canceled minor league season.

How much have the team’s hopes and expectations changed for this new season? And what does it mean for the “step-back” plan?

“Nothing’s changed,” he said. “I’ve said it to players that I’ve had one-off conversations with. I’ve said it in public interviews. We feel like the pandemic set us back only in terms of days, but our plan remains the same. And we’re approaching the 60-game season the same way we would have if this were the first of April, and we’re starting on the first of April, and we’re looking at the first half of this season. We want to integrate those young players, give them an opportunity to get better, and get them their reps.”

Like a lot of people, Dipoto was stuck working from home during the shutdown. With each passing day, he knew the plan in place was being wounded. Games, and the teachable moments that come with them, were slipping away.

“We lived through it,” he said. “And it was highly concerning, but our general thought through it all was that we are young enough, we’re athletic enough and we are focused enough that we thought it was going to affect us in less significant ways long term than it might other teams.”

“While it might affect our plan, no season in 2020 would have had certainly had an effect on our 2021 outlook … and perhaps 2022,” he said. “Because now you’re trying to catch up in development, but what we’re doing is so big-picture focused, that we didn’t feel like it was taking us off of our plan. We just have to stay patient and not panic because we were losing a year in development that we can catch up with.”

With most of the rebuild’s projected core players playing this season aged 25 or younger, issues such as service time, club control, age decline and increasing salary were less damaging. The cadre of young players serves as a reminder that the rebuild is still ongoing and the emphasis remains on long-term development over short-term successes.

“If we were a team that had several players that were moving toward free agency or who were effectively starting to get into their 30s, deeper into their 30s, that would have been more concerning to us,” Dipoto said. “We didn’t feel like it was going to be a lost season. And we did feel like our age, athleticism and general focus was going to allow us to do something positive here.”

The goal of getting 500 plate appearances for White, Lewis, Shed Long Jr. and J.P. Crawford is no longer viable, same with 20-plus starts for Justus Sheffield and Justin Dunn.

“Your first full year in the big leagues, you want to see how a player adjusts,” he said. “Especially when you’re going back through and playing divisional opponents 19 times and you’re seeing Justin Verlander six times. You want to see how they adjust. We’re not really going to have that same opportunity this year.”

The plan is to maximize what is available in 60 games.

“The benefit that 60 games does provide us is we can be really patient with the young guys,” Dipoto said. “Our messaging from the start, whether public or in-house, has been, ‘We are here to help this group jell and create the foundation to build forward.’ And we’re going to give them the opportunity to succeed and fail. We know that there’s going to be some of both of those. … And if they need a little time on the taxi squad, or need a little time to go back to the minor leagues, that’s OK too. We’re not setting numerical goals.”

An opposing MLB professional scout familiar with the Mariners’ plan and speaking on the condition of anonymity said 60 games might not be enough to form a true evaluation of the Mariners rookies’ MLB potential.

“Their original plan was based on seeing how these guys react to a 162-game schedule and the grind of the season,” the scout said. “It’s a much smaller sample size to pull from. It would be a concern.”

Dipoto, of course, erred on the side of optimism, believing this season’s 60 games, any MLB games from last season and their knowledge of the player will provide viable evaluations.

“We have a pretty strong feeling about where they are, what they have the potential to turn into now,” he said. “Sixty games in the big leagues is still a lot of games. Over the course of a long career, it doesn’t sound like much. But over that 60 games, these guys can pile up plate appearances and innings that give you a really good sense of who they are. And all you want to see is them show maturity, develop their major league routines, prepare and understand how to prepare, and then go out there and take their physical ability across the line.”

Using Lewis as an example, Dipoto said he’s looking for “the belief that what we saw in September last year for Kyle is real and what we’re seeing here in summer camp is not only real, but that might just be scratching the surface.”

Back in March, Dipoto’s best-case scenario for this season was for the young players to start finding ways to win in the second half of the season while another wave of prospects is called up to supplement — players such as top pitching prospect Logan Gilbert, several young relievers and perhaps even top outfield prospect Jarred Kelenic. With the exceptions of the relievers such as Aaron Fletcher, Sam Delaplane and Joey Gerber debuting at some point, the rest seems “unrealistic” given the circumstances. Moving Kelenic or Gilbert closer to free agency a year or two early would be counterproductive.

“That these guys get better,” he said. “And along the way, if we win games, that would be awesome. We would love to be as competitive as we can. Winning reinforces that you’re doing good things. But we don’t feel like we have to go 50 -10 to find success in the season. It’s allowing for each of the individual players to get better, to build the clubhouse cohesiveness that we feel like has been building here for the last year and a half, and to set ourselves up for 2021.”

His timeline for fielding a competitive roster with the potential to contend for a playoff spot has been delayed.

“What would have been July of 2020, in a normal scenario, now becomes April-May of 2021,” Dipoto said. “And what we thought was going to be a second-half surge in 2020, as the next phase of young players coming up is probably May-June of next year. Everything gets set back four or five months, but we’re so young that we don’t think it derails our program.”

Removing emotion from the decision-making process, which was lacking in past front-office regimes, is necessary. The previous ownership group would’ve never allowed a rebuild this drastic or had the stomach to expect the possibility of losing seasons despite producing so many of them.

To fans, a rebuild is far more tolerable as a concept than a reality. Any goodwill from properly disseminating a plan dissipates as losses accumulate that first season. The second season becomes more difficult for fans as patience dwindles. Perhaps the absence of baseball and the changes to day-to-day life will provide the situation with some levity. The idea of watching young players filled with potential who are integral to the team’s long-term improvement does seem more palatable than watching last year’s team — filled with only a handful of useful returnees and rounded out with retreads, rejects and reclamation projects — flirt with 100 losses.

The Mariners didn’t plan to have a seminal season in their rebuild sidetracked by a pandemic. But their plan is to adjust to the limitations of this season and push forward.

“We’re not going to do anything willy-nilly,” Dipoto said. “Everything has its purpose. There’s a plan and a timing and we’re not going to rush it. Ownership is behind not rushing it. When this comes together, we want it to last for a long time and we’re going to be really careful in how we get there.”