PEORIA, Ariz. – Sam Carlson shook his head in disgust at the slider he’d just thrown. It left his hand without a chance of it being a strike. The right-handed swinging hitter in the batter’s box recognized it as well, “spitting on it” as hitters say, watching it dart well off the plate without even thinking about swinging.

Following a fastball up in the zone, Carlson went back to the slider again. This time, he delivered the pitch to his intended target, starting it on the outside half of the plate and having it break out of the hitter’s reach.

It generated a flailing swinging strike three from the hitter, a nod of approval from Mariners pitching coach Pete Woodworth standing nearby and plenty of encouraging comments from the mass of minor-league pitchers congregating at practice field No. 2 on the Mariners complex Thursday afternoon to watch live batting-practice sessions.

“It felt good,” Carlson said of the 25-plus pitch session. “I was just trying to get comfortable out there. It’s a long season, and this was the first live BP.”

And his focus was completely on his execution, not once on his elbow.

“It’s been a long time since those days,” he said. 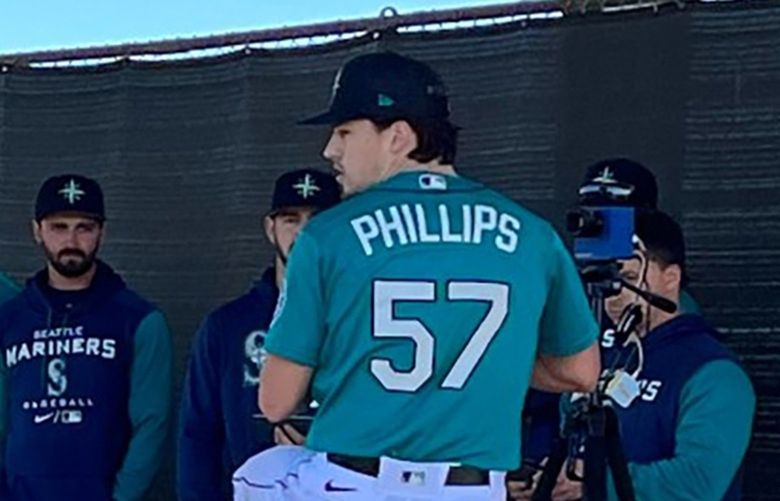 Indeed, it was almost two years ago to the day that Carlson reached a milestone moment in what had been an interrupted professional career. On Feb. 21, 2020, Carlson pitched in a similar live batting-practice session of about 20 pitches. It was the first time he’d pitched to a hitter in any form since the summer of 2017.

“I’ve been at points in the game where I’ve literally hated it, and I’ve thought, am I ever going to throw again?” he said that day. “I’ve had days where I’ve cried myself to sleep. It’s been a lot. It really tested my character.”

Selected in the second round of the 2017 draft out of Burnsville High School in Minnesota, Carlson eschewed a verbal commitment to the University of Florida and signed for $2 million. After his second start in the Arizona Complex League that summer, he felt pain in his elbow and was immediately shut down.

It was the start of a three-year test of fortitude.

The Mariners hoped that an offseason of rest and strengthening would allow Carlson to come back healthy for the 2018 season. But the elbow and forearm discomfort returned during the Mariners’ minicamp in February 2018. He was shut down again and given a Platelet Rich Plasma (PRP) injection. After rehabbing and strengthening the arm again, Carlson felt more discomfort in the elbow and had surgery to repair a tear in his ulnar collateral ligament.

Scheduled to return to the mound late in the 2019 season following an on-time recovery, he developed an impingement in the elbow, which he first feared was another torn UCL, that forced the Mariners to shut him down again.

While some players get indignant when talking about their past injuries, worried that they will somehow define them, Carlson has grown philosophical about his journey.

“I’ve just come to peace with everything that happened,” he said. “It happened, there’s no changing it. Nothing I can do can change it.”

That cathartic live batting-practice session in 2020 was subdued when spring training was shut down two weeks later, and the 2020 minor-league season was eventually canceled due to COVID-19.

Yet another frustrating delay to resuming his path to his big-league dream.

Carlson was able to pitch in the instructional league in Arizona in November 2020, which offered a soft landing of sorts. It was competition but under a controlled environment.

After MLB delayed the start of the 2021 minor-league season by a month, Carlson, who was assigned to Low-A Modesto, trotted to the mound of John Thurman Field in the top of the first inning to face the visiting Stockton Ports. It was his first official minor-league start since July 18, 2017 — a span of three years, nine months and 20 days.

Despite issuing a one-out walk, he worked a clean first inning. On a strict pitch limit, he produced a four-inning outing where he allowed an unearned run on two hits with a walk and seven strikeouts.

“It’s a long season,” he said. “I’ve never thrown that much in my life. It’s just a lot of stress on your mind and your body. You have to learn how to take care of yourself. And you are also going against some of the best players in the world every single week and you are competing like crazy.  And that’s just in A-ball, not even the major leagues. You learn how to be a competitor.”

Carlson was diplomatic about his outings in 2021 and his goals for 2022.

“The big thing for me is making my stuff a little bit nastier, controlling it, focusing in on every single pitch and just getting more experience,” he said. “I went three-plus years without playing in a game. I can tell you with certainty that in my first five outings last year, I was uncomfortable out there. It was like I had forgotten how to play baseball, not entirely, but you get a feeling out there where everyone is looking at you and what you do.”

Due to the injuries, the minimal minor-league experience and his age – he turned 23 in December – Carlson’s status as a top prospect in baseball and in the organization has dwindled.

He knows he can’t make up all that was lost in a season or two. Though his path has been far from straight, the destination remains the same.

“My locker is right next to Emerson Hancock’s locker,” Carlson said of Seattle’s first-round pick in 2020 and highly regarded pitching prospect. “We were both in the 2017 class out of high school. I went the high school draft path, and he went to Georgia. We are in the same spot now. He did start last season in Everett, but we are both in the Mariners organization coming off our first full season. We took two completely different routes with the same goal of getting to the big leagues and helping this team win a championship.”