Sports fandom by its very nature is a vicarious endeavor. We watch others do what we cannot, and thrill to their achievements almost as if they were our own.

But since that fateful day precisely one year ago, when sports so abruptly shut down because of the novel coronavirus, the ability to gather in venues for the purpose of viewing finely skilled pro athletes has disappeared. Oh, we can still watch on television, but it’s not quite the same — vicariousness once removed.

Now, however, an end is in sight. Mind you, the shuttering of stadiums has been far from the worst byproduct of the ravages of the coronavirus, paling in comparison to the genuine human suffering. But there is a great solace and comfort in the gradual return to normalcy that, hopefully, is creaking into place. 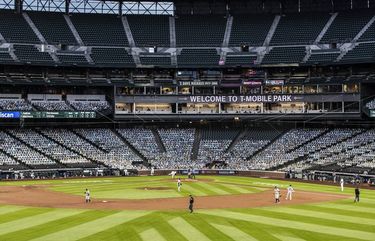 On Thursday, one giant manifestation of that normalcy occurred with Gov. Jay Inslee’s announcement that up to 25 percent capacity will be allowed at live sporting events in Washington. This ruling will soon impact the Sounders and OL Reign, but most immediately, it means that opening day for the Mariners — always regarded as something of an annual civic holiday — will take place with fans in the stands at T-Mobile Park on April 1.

Granted, it won’t be a sellout, some 47,000 strong, as could almost always be counted on in the past, even in the leanest years. Specifically, the cutoff point was set at 9,000, which in the early days of the Mariner franchise was a pretty typical turnout at the Kingdome. Now it is an absolutely necessary nod to the still-present danger of this disease, and the social distancing that remains the most prudent recourse.

But the presence of any fans is a cause for joy, even if there remains some latent uneasiness about mass gatherings of any scope. I mean, the cardboard cutouts were cute and all, and the canned crowd noise at least filled the void of silence. But I will savor the first drive to the gap by a Mariners hitter with a couple of runners on base, and hearing as much of a din as 9,000 action-starved spectators can muster.

That sort of Pavlovian call and response is the lifeblood of spectator sports. A whole year has gone by without getting to see it in action, or hear it in full. It has been a lesser experience because of it, even if you surreptitiously did some hooting and hollering in the privacy of your living room.

Mariners manager Scott Servais recognizes the power of the collective voice in potentially willing his players to better performances in what stands as a vital season for the rebuilding ballclub. And he is eager to showcase the young talent the organization has been crowing about.

“I think our fan base is looking forward to laying eyes on a lot of these young players,” he said via Zoom on Thursday. “I know they saw a little bit of Kyle Lewis in 2019, but they didn’t see the Rookie of the Year last year in person. And a number of our guys have taken big steps forward. I get that it’s fun watching the games on TV, but there’s nothing like being in the ballpark, to feel like you’re a part of it. And you get a feel for the nuances of the game and the personalities of the players and the things that you just don’t pick up on TV.

“Our players are talking about it openly, about how important it is that we do get fans in the ballpark in Seattle.”

The last time a professional sporting event was staged with fans in Seattle was back on March 7, 2020, when the full scope of the pandemic was just starting to be realized. The Sounders, in conjunction with government health officials, made the controversial decision to open the doors of then-CenturyLink Field for their match with Columbus just days after Inslee had declared a state of emergency across Washington.

An announced crowd of 33,080 watched the Sounders and Crew play to a 1-1 tie — and then the sports world went dark.

Now the lights are slowly coming back on around here. The entire 2020 Major League Baseball season was played in empty stadiums until the National League Championship Series and World Series at Globe Life Park in Arlington, Texas, where limited numbers were allowed. The same has been the case at spring training games in Arizona and Florida.

It appears that 29 of the 30 MLB teams will have fans in various numbers at their home openers. The lone exception is the Washington Nationals, who have yet to celebrate their 2019 World Series title with fans in attendance. At the moment, local government officials in D.C. have not signed off on fans for opening day, but that will be reviewed this month.

At the other end of the spectrum is the Texas Rangers, who this week announced full capacity for opening day. Servais called the decision “a little bit alarming” — an assessment that has been echoed by some medical experts.

But here in Seattle, they’ll do the sporting restart with vigor and restraint, as it should be. And with the acceleration of COVID-19 vaccinations — called by Inslee “a game-changer beyond all imagination” — we can start to dream about a day when all of life returns to the pre-COVID-19 rhythms.

We’re not there yet. But you can see the vague outline starting to form — and soon it will contain bats and gloves.