While the news that Mariners’ top prospect Jarred Kelenic will make his major-league debut Thursday night at T-Mobile Park generated a fervor on social media on Monday evening, it’s possible that the hard-hitting outfielder might not be the only prospect called up for the homestand.

Could Logan Gilbert, the Mariners’ top pitching prospect, be called up to make his MLB debut a day after Kelenic?

The Mariners are seriously considering it. 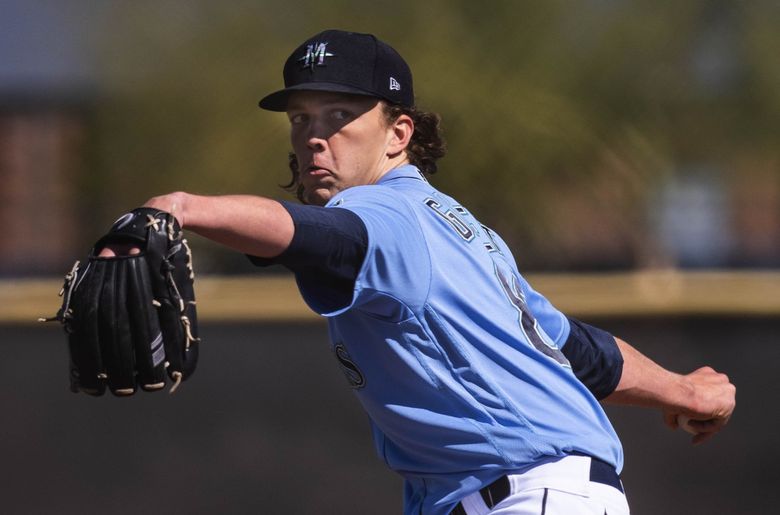 Manager Scott Servais tried to outline his starting pitching for the upcoming four-game series vs. Cleveland on Tuesday afternoon.

It’s worked at a passable level over the last 10 days thanks to multiple days off based on MLB travel rules.

But with Seattle’s schedule featuring just one day off in a stretch of 26 games, including playing the final 17 games in 17 days, it seems unlikely the Mariners can continue doing that successfully without destroying their bullpen. At some point, they need to bring in a real starting pitcher to fill at least one of those spots, if not both.

Of those three injured starters and swing pitcher Ljay Newsome, who was recently placed on the injured list with elbow inflammation, only Gonzales is likely to return this season.

Meanwhile, Gilbert wasn’t listed on Tacoma’s pitching probables for the first three games of the Rainiers’ six-game series in Salt Lake City. Tacoma is currently listing Friday night as to be determined.

Gilbert made his Triple-A debut on Friday, pitching five innings and allowing one run on four hits with no walks and five strikeouts. He threw only 67 pitches with 47 strikes, including 12 swings and misses.

Although the Rainiers don’t have enough traditional starters on their rosters, they are still using the six-man rotation plan. With a day off on Wednesday, Gilbert’s normal turn in the Rainiers rotation was supposed to be Friday night.

So does that mean he’s being called up?

Not necessarily, but it all lines up as something more than a possibility.

Asked a general question about calling up prospects, Servais tried to be diplomatic.

“We have good players that are close to being ready to help us here,” he said. “Ultimately, it’s not my decision when they come, but those conversations are going on and they’ll continue to go on.”

The Mariners’ original plan was to get Gilbert a handful of starts at the Triple-A level before calling him up. They plan to be very cognizant of his total innings pitched in 2021. With no season in 2020 and Gilbert only pitching in intrasquad games at the alternate-training site, they don’t want to push him to 150 innings this season and run the risk of injury.

It’s much easier to control innings usage at the Triple-A level than at the MLB level, where the game results matter. Also by nature, an average inning pitched at the MLB level is physically more taxing. Servais has also maintained that the plan was to have Gilbert pitching in MLB games in September. Calling him up on Friday would seem to deviate that from that plan.

But then again, the Mariners expected Kelenic to get more than six games worth of plate appearances at the Triple A level before bringing him up.

The circumstances surrounding the starting rotation might make the Mariners amend those plans. The only other true starting pitcher in Tacoma is veteran lefty Hector Santiago, who was recently signed to a minor-league contract. Santiago tossed four scoreless innings, not allowing a hit with seven strikeouts and two walks. He’s listed as Tacoma’s starter on Saturday night in Salt Lake.