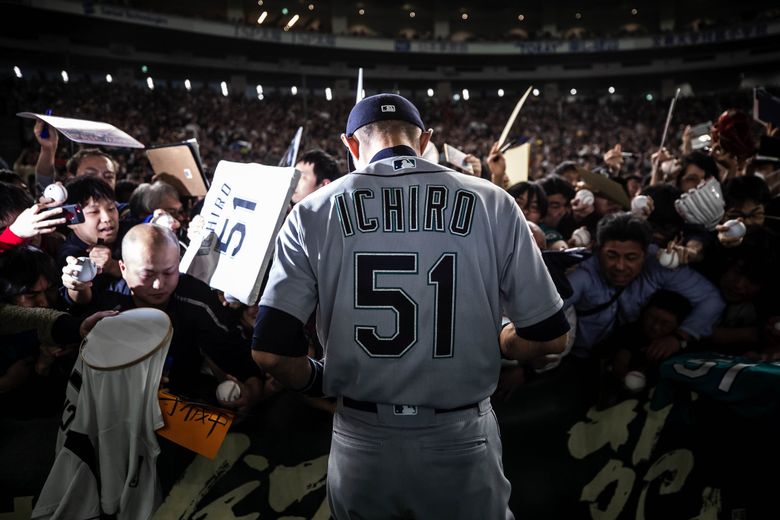 Just before the Mariners take the field, Ichiro stops to sign autographs for fans along the left-field foul line. The Seattle Mariners played the Oakland Athletics on opening day for both teams Wednesday at the Tokyo Dome in Japan. (Dean Rutz / The Seattle Times)

TOKYO — At about 1 p.m., the Tokyo Dome’s outside concourse was abuzz with baseball fans avoiding their jobs and responsibility — an opening-day tradition that can be found even in Japan’s work-first culture.

First pitch still was six hours away, but the celebration already had started.

Lines of fans waited outside merchandise tents to spend 8,000 yen — about $72 — on a sweatshirt, or double that on an Ichiro jersey.

Near the entrance to the first-come, first-served general admission outfield seats, fans had shown up in the morning to place signs marking their place in line for when the doors finally opened for batting practice. The placeholders — hundreds of them, similar to the tent cities college students set up for rivalry basketball and football games — wrapped around the roped-off area.

Once the doors opened, fans sprinted to get spots along the fence, hoping to get any players’ pictures and autographs, but one in particular — Ichiro. They screamed for him, held signs and documented his every move with their phones.

While Major League Baseball treats this opening series in Japan as a celebration of the game and an effort to spread its popularity, a hint to MLB — baseball already wildly popular in Japan. If you think opening day in the U.S. is big, the excitement in the Tokyo Dome exceeds it. They did all the pregame pageantry with a U.S. Military band and a ceremonial first pitch that featured Seattle’s former All-Star closer Kaz Sasaki throwing to former Mariners catcher Kenji Johjima, with former A’s great Rickey Henderson at the plate.

“The reaction of the Japanese fans was outstanding,” Henderson said. “I think they recognize baseball and they love the game of baseball. I think it is a great thing for Major League Baseball to open the season in Japan.”

A real home team wasn’t even playing in this game, but the Mariners were the favorite due to Ichiro’s presence.

Fans in Japan have an energy and intensity that doesn’t always permeate U.S. crowds. Last season, Mitch Haniger played a series with an MLB all-star team against Samurai Japan — the Japanese national team — so he’s seen the difference. That same intensity was still there Wednesday, even with two U.S. teams playing.

“It’s a great place to play,” Haniger said. “It’s fun, and there’s always this excitement going on. There’s never a dull moment out there with them. I feel like they really appreciate the game and there aren’t many fans that aren’t watching the game. They are all watching the games. It’s about baseball in the stands.”

Added pitcher Marco Gonzales, whose first opening-day start was unique: “It was pretty wild. Once I took the mound, I was very aware of where I was and what I was doing. I was jittery, to say the least. I was just trying to embrace all the emotions I could and just look around and see what everything was like. The atmosphere was incredible.”

Mariners second baseman Dee Gordon best summed up the sojourn in Tokyo that has included two exhibition games and a regular-season game, with one more to come Thursday. Regardless of what MLB might think, this is a celebration of Ichiro’s career.

“This whole situation is pretty much for him,” Gordon said. “He definitely deserves it. It’s an honor to be here with him.”

Indeed, there is Ichiro fatigue on this trip. Fans, media and an entire nation want to see him launch one of those patented line drives into left-center or a hard ground ball through the right side. He’s been unable to do that thus far.

A crowd of 45,787 roared when his name was announced as part of the starting lineup, again when he raced around the outfield to his spot in right field and even when he hit hard foul balls.

Getting the start in right field, he went 0 for 1 with a walk in two plate appearances.

For each at-bat, probably 70 percent of fans were holding their phones, recording a possible piece of history — and perhaps hit No. 3,090.

At age 45, he was the second-oldest position player to start on opening day.

“It’s a great honor for us to come back here with Ichiro, understanding what he means to the Mariners franchise,” Mariners manager Scott Servais said. “We know what he means to baseball here in Japan, but he also means a lot to our entire organization in Seattle. We want to send him out here in front of his home crowd in Japan the best way we can. We’re just trying to give him every chance to tip his hat because he’s certainly deserving of it.”

Ichiro played 3½ innings before taking the field for the bottom of the fourth. Before the half-inning started, Servais sent out Daniel Vogelbach to play first base and had Jay Bruce move to right field to replace Ichiro. The manager had provided a moment for fans to cheer Ichiro, but it didn’t work quite as planned. Fans didn’t understand what was going on.

“I just wanted to do the right thing for Ichiro,” Servais said. “You typically don’t do that. But I owe it to the fans here in Japan. And I thought it was the right thing to do.”

When Ichiro started hugging teammates as he exited the field near the third-base line, fans began to understand he was coming out of the game, and many then applauded.

“That was a special moment, to see him come off the field with everybody screaming and cheering for him,” Gordon said. “I know they were disappointed to see him come out of the game, but for us, we’re just happy to see him embraced by everyone.”

Servais had never planned on playing Ichiro the entire game.

“We certainly want to give him the opportunity to go out and play but also get some other guys in the game,” Servais said. “I understand everybody wants to see him go all nine innings, but we’re trying to do the best thing for the team, and Ichiro understands.”

The plan is for Ichiro to play in the series finale Thursday, but Servais wouldn’t commit to a specific role — starting or coming off the bench — only that he would play.

“He will get in the game at some point,” Servais said.

That game will offer a glimpse of Japanese baseball’s past in Ichiro, but also a long look at its future, with left-hander Yusei Kikuchi starting for the Mariners and becoming the first Japanese-born player to make his MLB debut in Japan.

Ryan Divish: 206-464-2373 or rdivish@seattletimes.com; on Twitter: @RyanDivish. Ryan Divish covers the Mariners in Seattle and on the road. Look for his 'Extra Innings' podcast and weekly Sunday mailbag during the season.
Advertising