So … anything happen in the Mariners game Sunday?

Hot as the M’s were after winning five straight on the road, tempers got a whole lot hotter in the second inning vs. the Angels. After throwing behind Seattle’s Julio Rodriguez in the first, Halos pitcher Andrew Wantz hit Jesse Winker just above the hip, sending the outfielder into a rage as he charged toward Angels interim manager Phil Nevin.

Winker’s thinking — and it’s hard to argue against his logic — was that Nevin ordered the guided missile as payback for the previous night, when Mariners pitcher Erik Swanson nearly nailed Mike Trout in the noggin with a 95-mph fastball in the bottom of the ninth.

Winker’s reaction prompted a bench-clearing brawl that lasted more than two minutes, included a host of haymakers, and led to eight ejections. And though the Mariners weren’t guilt-free in the brouhaha — I’m putting most of this on the Angels and the umpires.

Let’s break this down. Tensions between these clubs began Saturday night when Swanson — his squad leading 5-3 at the time — came within inches of hitting Trout on the head with a runner on second and two outs. Trout was livid after the game, and there was talk that the Mariners were targeting the three-time MVP for dominating the Mariners in their series a week earlier, when he hit five home runs in four games.

The teams exchanged words after the game, but no discipline was doled out. The feeling heading into Sunday’s game? The Angels weren’t going to play nice.

Buttressing this hunch was Nevin starting Wantz, a reliever, over expected starter Jose Suarez. The idea was that the Angels could better afford to lose a member of the bullpen to ejection than a member of their rotation.

And sure enough, Wantz threw behind Rodriguez in the opening frame, prompting a warning to both dugouts. About 20 minutes later, after Winker was hit by the first pitch of the second inning, the early leader for Brawl of the Year ensued — and here’s why the Mariners deserve the least of the blame.

First off, you’re going to have a tough time convincing an objective observer that Swanson tried to hit Trout the night before. He was wild the whole inning, and was presumably trying to pitch around the superstar before falling behind 2-0 in the count and intentionally walking him.

Besides, it’s not as if Trout was flipping his bat or staring down pitchers during the aforementioned five-home-run series. He was simply dominating the Mariners — something he’s done better than anyone else in MLB history. The M’s never intentionally threw at Trout before, so why would they do so then?

In fact, if there was ever a time for the Mariners to retaliate against the Halos, it would have been after Angels pitcher Michael Lorenzen actually did hit Seattle’s Justin Upton in the head two Fridays ago. But the M’s were confident the ball simply got away from Lorenzen, just as it almost assuredly did from Swanson. 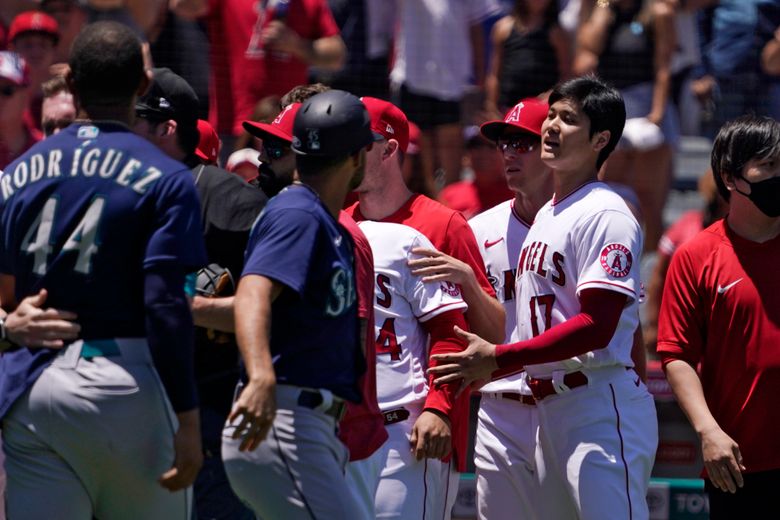 Mariners brawl with Angels after being thrown at twice; eight get ejected
Advertising

So no, I don’t think the Angels were justified in seeking revenge, but even if they were — it should have been over after Wantz threw behind Rodriguez in the first. You want this to be an eye-for-an-eye thing? OK. Trout was never hit. Neither was Julio. That should have made things even if one was buying into the Angels’ already flimsy retribution case. But that didn’t seem to be enough for Nevin. He kept Wantz in to start the second, and we know what happened from there.

The umpires are a long way from innocent in this matter, too. Based on the events of the previous game, and the fact that Wantz was starting, they had to have an inkling some foul play would be coming. And had home-plate umpire John Bacon ejected Wantz in the first, the second-inning ruckus could have been avoided.

All that said, the Mariners were hardly angels in their fight with the Halos. Shortstop J.P. Crawford, who was throwing legitimate punches, was tossed and will likely face a lengthy suspension. Angels broadcasters weren’t wrong when they suggested that the Mariners looked intent on keeping the altercation going. And when Winker flipped two birds toward the crowd in Anaheim after coming off the field, he forfeited most, if not all, the sympathy he might have garnered after absorbing Wantz’s 91-mph fastball.

Sunday was a bad look for baseball. It isn’t unusual for benches to clear, but when pushing and shoving devolves into legitimate violence, the sport takes a bruising, too.

Still, it’s worth pointing out that the Mariners — who ended up losing 2-1 — weren’t the instigators of that afternoon fracas. The guilt lies mostly with the Angels and the men in blue.

As far as discipline goes, members of the M’s are going to be in trouble — but they weren’t the ones looking for it.