Scott Servais took over as the Mariners’ manager in October of 2015. He has served as the team’s skipper in more than 900 games.

He meets with the media before each contest, then again when the contest concludes. I’m not sure I’ve ever seen him more despondent than he was after Wednesday’s loss. 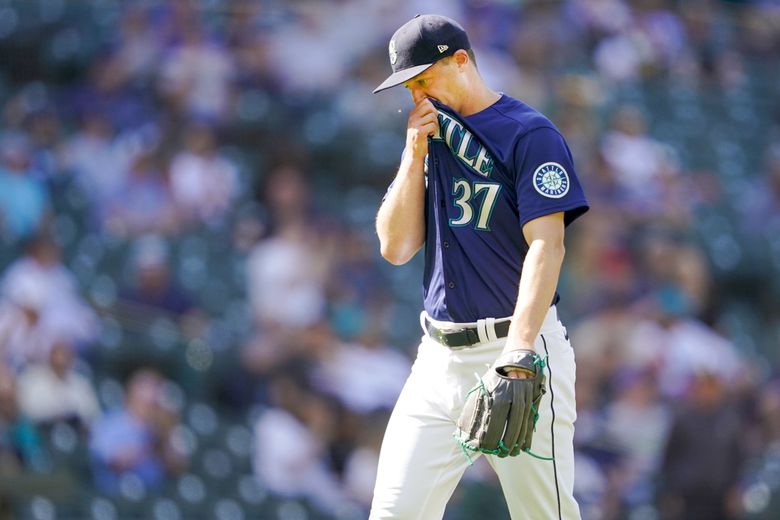 The Mariners’ situation has zipped past infuriating and become outright depressing. They’ve lost 21 of their past 28 games and just dropped two out of three to the last-place A’s. Actually, scratch that — the A’s were in last place. Thanks to Wednesday’s 4-2 defeat, the 18-27 M’s are now alone at the bottom of the American League West.

It’s no fun writing the same column week after week about this team, but what other options do the Mariners provide? If preseason expectations were a redwood, their performance thus far has been a house plant.

Last week, they suffered a four-game sweep at the hands of the sub-.500 Red Sox, and just now dropped a series to a team with the second-lowest payroll in MLB. No doubt the M’s need better pitching and hitting — but as much than anything, they might just need a hug.

“We’re not playing good baseball. We know that. We have to make some adjustments here, and it needs to happen quick,” Servais said. “We’re going through some painful times right now, there’s no question about it.”

If this were 2019, which Mariners general manager Jerry Dipoto declared a “step-back” season, these results might be easier for fans to stomach. If this recent stretch, in which they dropped seven of their past eight, occurred in mid-April — one could chalk it up to the season still being early. But it’s not 2019, and it’s not all that early anymore. This year’s team has offered no indication that its 21-year playoff drought is going to end.

Last season, the M’s made a surprise run at a postseason berth as they posted 90 wins. They added reigning AL Cy Young Award winner Robbie Ray, and three All-Stars in Jesse Winker, Adam Frazier and Eugenio Suarez. To win 90 games this year, they’d have to go 72-45 the rest of the way, which would be a winning percentage of .615. At the time of publication, only six teams in MLB have been winning at that pace or better.

Winning streaks happen in baseball. Laws of probability will say the Mariners will have one. But it’s hard to believe that too vehemently when they haven’t had back-to-back wins since April 25.

Stretches like this often lead to someone losing their job. That’s not a suggestion from me — just an observation. To endure this level of misery and not have the brass make some kind of change is unusual. No predictions here, but I wouldn’t be surprised.

Speaking of the brass, it’s fair to ask questions about what Dipoto has been building and how ownership is spending. It’s been seven years since Jerry came on, and while he has earned two extensions, the playoff drought continues. His pickups from this past offseason have been underwhelming. Ray is 4-5 with an ERA of 4.75. Winker, an All-Star with the Reds last season, is hitting .216  — the same batting average as Suarez, another former All-Star.

At the same time, the Mariners have the ninth-lowest payroll in MLB. Team chairman John Stanton said last season that he would give Dipoto the proper resources to build a contender, and maybe that will be true when the right opportunity comes around. But it does seem like Mariners fans have been waiting a long time for said opportunity.

Right now, all the players can do is plug away and try to win the next one, which will come Friday at home vs. the Astros. As shortstop J.P. Crawford said after the game “No one likes to lose, especially the way we are right now, but we have to come back to work. We’re going to enjoy this off day and get our minds right and we’re going to come back strong.”

He said it like he believes it. Do you?