After fighting through pain and lack of mobility in his left shoulder, making at-bats uncomfortable at times, and enduring one of the worst slumps of his professional career, Abraham Toro continually looked to the next day as another opportunity for success.

To do that, he likely has avoided Mariners Twitter where his mere presence in the lineup sparks anger, vitriol and discontent.

But on Saturday afternoon, he silenced his detractors, if only for a day, with some late-inning heroics. 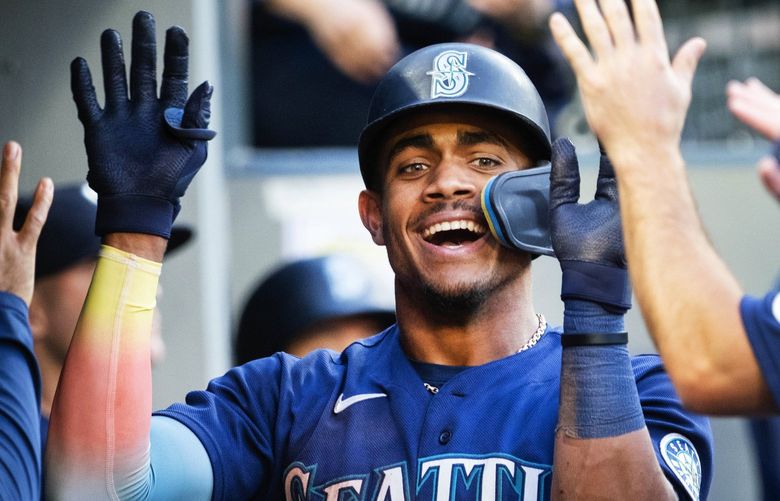 With the bases loaded and the A’s positioning five players on the infield and two in the outfield in hopes of a play at the plate, Toro ripped an uncatchable line drive into the right-center gap off right-hander Lou Trivino that allowed pinch runner Marcus Wilson to trot home with the game-winning run and the Mariners to celebrate a much-needed 2-1 walkoff victory over the A’s.

“I was trying not to focus on it and just get a ball in the air,” Toro said of the five-man infield. “The pressure is all on the pitcher, not the hitter in those situations.”

With the win, the Mariners have won nine of their past 12 games, improving to 38-42 and avoiding another frustrating loss where they got solid starting pitching and failed to generate enough offense to capitalize on it.

Down 1-0 going into the eighth inning, and having lost out on runs on a ground-rule double that hopped over the fence in the second inning and a pair of inning-ending double plays on caught line drives that doubled off runners, the Mariners seemed due for something to change. Manager Scott Servais believed it.

“There’s times you think, ‘OK, it’s not our day after that happened,’ but I said, ‘We’re winning this game. This can only go so bad for so long. It’s got to flip,'” Servais said. “And it did. Credit to our guys for hanging in there. Because it’s easy to say it is not our day and we’ll move on until tomorrow. Our guys didn’t do that today.”

It flipped for the Mariners in the eighth inning against the Athletics’ awful bullpen.

With one out, Servais called on veteran outfielder Justin Upton to pinch hit against A’s hard-throwing lefty A.J. Puk. The strategy proved ideal. Upton, who has just four hits in 38 plate appearance since joining the team, ripped the first pitch he saw from Puk — a 97-mph fastball — into Edgar’s Cantina for his first homer of the season, tying the game at 1-1. An everyday player for most of his career, it was his first career pinch-hit homer.

“I’m definitely not used to it,” Upton said. “But, you know, I had gotten a pinch-hit at-bat the other night and started trying to find ways to figure it out. You’ve just got to change your mindset a little bit in the box. You have to be ready to hit. Sometimes the best pitch you will get is that first one.”

After Diego Castillo held the A’s scoreless in the top of the ninth, Eugenio Suarez worked a leadoff walk off Trivino. Carlos Santana advanced Wilson to third with a single through the right side. With the A’s moving an outfielder to the infield, Cal Raleigh reached on a fielding error to load the bases for Toro, who came into the game hitting .177 on the season and dealing with the effects of a shoulder sprain in early May.

“Every day is a new day,” Toro said. “You can’t look back and think of it as a slump. It’s a new day and you start over.”

Toro came into the game with a .293/.360/.561 slash line with runners in scoring position, including three doubles, a triple, two homers and 15 RBI in 50 plate appearances.

“It has been a struggle for him this year,” Servais said. “He has got a number of big hits for us. He has really good at-bats late in games. He does feel better physically. The shoulder has calmed down quite a bit and you see it showing up in his swings.”

After a shaky first inning where he walked Tony Kemp, the first batter of the game, who later scored on a sacrifice fly to right field, an irritated Kirby went into shutdown mode.

This wouldn’t be a repeat of his previous outing where he allowed seven runs, as that one run was all the A’s were going to get against him.

“Big time, I needed this one,” he said. “It’s a good confidence booster going into my next start.”

Even after Kirby allowed a leadoff single to Sean Murphy to start the seventh inning, Servais allowed his starter to remain in the game even with his pitch limit nearing. Kirby came back to strike out Stephen Piscotty, get veteran left-handed hitter Stephen Vogt to pop out in foul territory and get switch-hitter Skye Bolt to end the inning with a fly ball to left field.

“He was in total control all day long,” Servais said. “After they got that first run, he got into a great rhythm.”

Kirby’s final line: seven innings pitched, one run allowed on three hits with a walk and nine strikeouts. He threw a season-high 100 pitches with 71 strikes.

Kirby’s teammates rewarded the outstanding effort by offering no run support while he was on the mound. A’s starter Paul Blackburn, who pitched 5 1/3 shutout innings to beat Seattle on May 25 and gave up seven runs on 10 hits in a loss in Oakland on June 22, returned to his early season form. Blackburn, who was once briefly in the Mariners’ farm system before being traded for Danny Valencia, tossed 6 1/3 scoreless innings, allowing four hits with a walk and five strikeouts, on Saturday.