Perhaps a few years from now, if everything goes as planned, Mariners fans might look back on Thursday as the day when the franchise’s rebuild finally started to gain real traction toward success. Of course, that’s an optimistic viewpoint for a team that has yielded nothing more than pessimism for the better part of a decade.

Still, even the most bitter or beleaguered of Mariners fans have to find some excitement and anticipation for Thursday night’s game at T-Mobile Park when two of their top prospects in their minor league system will make their MLB debuts.

Based on Major League Baseball sources, the Mariners have decided to call up hard-hitting outfielder Jarred Kelenic to start in left field and hard-throwing right-hander Logan Gilbert to make the start on the mound to open a four-game series vs. Cleveland. Both were playing for Triple-A Tacoma. 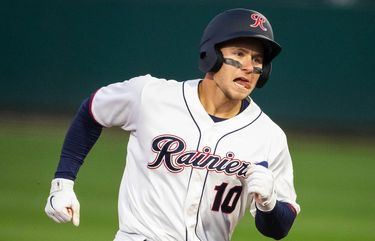 Kelenic, considered the Mariners’ No. 1 overall prospect by MLB Pipeline and No. 2 by Baseball America, is a top 10 prospect in all of baseball. He will be asked to help bolster a lineup that is far too reliant on the first four spots in the batting order. News of his call-up leaked on Monday evening.

Gilbert, rated as the Mariners’ top pitching prospect by Baseball America and No. 2 prospect by MLB Pipeline, is a top 40 prospect in MLB and will fill an open slot in the Mariners’ six-man rotation that has been decimated by injuries.

While the Mariners have had top hitting and pitching prospects called up before September to provide a boost of talent and production, they’ve never had a day where two prospects of this magnitude debuted together.

It certainly turned a random Thursday night game into a must-watch for fans.

But here’s a look at some of the recent in-season call-ups and anticipated MLB debuts for Mariners prospects and the circumstances surrounding them.

There wasn’t much anticipation surrounding Lewis’ call up in the sense that everyone knew he was going to be called up in September when the active rosters expanded to 40 — something that MLB will no longer do in the future. The Mariners had to place Lewis on the 40-man roster before that offseason to protect him from the Rule 5 draft. The Mariners let him play out the postseason series with Double-A Arkansas before calling up him and several other players, including Justin Dunn. After suffering a gruesome knee injury in 2016 and multiple surgeries over the next years, his status in the prospect rankings dropped. He wasn’t a top 100 prospect going into the 2019 season, but given the adversity he’d overcome and his status as the No. 11 overall pick in 2016, his debut was still highly anticipated for Mariners fans.

In his first game, Lewis crushed a solo home run off Trevor Bauer. He hit six homers in his first 10 games. He was named the American League Rookie of the Year for the shortened 2020 season.

At the time, it seemed a little early to call up the slugging catcher since he’d been drafted out of the University of Florida with the No. 3 overall pick just a year before.

In hindsight, Zunino’s call-up to the big leagues was not only premature but detrimental to his overall development and a colossal mistake.

The Mariners’ catching situation at the time was a mess with Jesus Montero not capable of handling the position, Kelly Shoppach disliked by the coaching staff and Jesus Sucre injured. So instead of trying to piece it together with perhaps a trade of a veteran minor leaguer, they called up Zunino, their No. 1 overall prospect and No. 17 in all of baseball.

“We had a little bit of a later target date, but when you look at it, we had an injury right now, there’s no harm in bringing him up,” general manager Jack Zduriencik said at the time.

He went on to play a total of 90 games that season, posting a .273/.348/.417 slash line with 16 doubles, seven triples, six homers, 36 RBIs, six stolen bases, 40 walks and 79 strikeouts. He was named the team’s MVP by the local chapter of the Baseball Writers’ Association of America. Unfortunately for Seattle, it was the most productive season of his career.

We are lumping this duo together since they debuted a week apart and were 2/3 of the members of the “Big 3” as labeled by Zduriencik. Both were top 100 prospects going into that season. The Big 3 also featured lefty Danny Hultzen, who likely would’ve debuted before both of them if not for shoulder issues. Paxton was taken in the 2010 draft as a first-round talent who fell to the fifth round. It took some time to figure out his mechanics and command and also just remain healthy enough to get to the big leagues. He made four starts in 2013, posting a 3-0 record and 1.50 ERA. He went 41-26 with a 3.42 ERA from his debut until he was traded after the 2018 season.

Walker was a supplemental first-round pick in the 2010 draft and also battled some injuries in his build up. He went 1-0 with a 3.60 ERA in three starts in 2013. He made 62 starts and three relief appearances, posting a 22-22 record with a 4.18 ERA before being traded to the Diamondbacks.

Hernandez made his pro debut at age 17 in 2003 and was pitching in the big leagues two years later. He rocketed through the Mariners’ system. In 2004, he made 25 starts and one relief appearance between High-A and Double-A, posting a 14-4 record with a 2.95 ERA and 172 strikeouts in 149 1/3 innings. He started the 2005 season with Triple-A Tacoma, but everyone knew he would be up by the middle of the season. He posted a 9-4 record with a 2.25 ERA in 14 starts and five relief appearances. In 88 innings pitched with the Rainiers, he struck out 100 batters with 48 walks.

Taken with the No. 1 overall pick of the 1993 draft, Rodriguez held out from signing his contract till the August deadline and didn’t play that summer. He made his professional debut in 1994 as the No. 6 overall prospect in baseball. He went from High-A to Double-A to Triple-A to the big leagues in one season. In 17 games on that call-up, he posted a .204/.241/.204 slash line in 59 plate appearances with 11 singles, three stolen bases and 20 strikeouts. The MLB season ended on Aug. 12 due to a players’ strike. Those 17 games cost the Mariners a year of service time, allowing Rodriguez to become a free agent after the 2000 season instead of 2001.