A difficult expansion season for the Kraken is ending with the promise of what the team hopes are better days ahead.

Between delays in opening Climate Pledge Arena until well after the preseason, pandemic mask and vaccination protocols imposed on fans, the inability to fully market players in public, rescheduling of games and dismal on-ice results, the Kraken could use a do-over. Instead, they’ll finish the season at Winnipeg on Sunday, then hope to build off better hockey played the final six weeks, the debut of top prospect Matty Beniers, planned player upgrades and knowing their arena and practice facility are fully operational minus COVID-19 restrictions.

“Our fans have been amazing from day one, and we’re thankful they’re on this remarkable journey with us,” Kraken CEO Tod Leiweke said Friday. “This season we’ve faced challenges we couldn’t have imagined, from Omicron to vaccination and mask mandates to snowstorms, but we’re building something truly incredible together.” 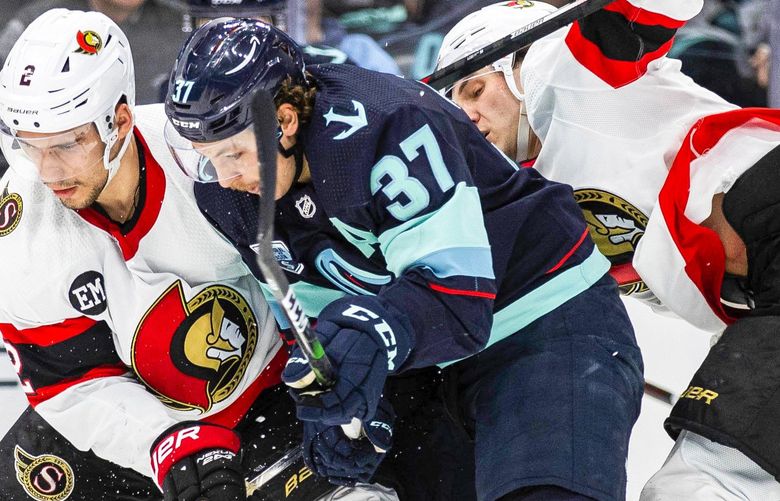 Some issues were unavoidable, but the Kraken’s poor on-ice play resulted largely from player and strategy choices they’ll need to improve upon.

The urgency to improve was evident in the growing lack of local buzz surrounding the team and hundreds, sometimes thousands of empty seats among the officially “sold out” Climate Pledge games. While the team still sold loads of merchandise, there was a significant drop in the resale value of Kraken season tickets on online exchanges — which didn’t sit well with season-ticket holders locked into much higher prices at minimum three-, five- and seven-year commitments.

“I was selling tickets for 75% below face value to try to get rid of some games,” said Beau Schott, 42, a self-described “lifelong hockey fan” living in South Lake Union who opted for a seven-year commitment on two seats costing him about $13,000 annually. “Because if you’re trying to get rid of a ticket a week before the game, you’re not going to get your money back on it. I just started listing every single game, and if they weren’t selling I’d just pull them back and go to the game.”

Schott said he’d planned to attend all but a quarter of games and sell the rest, but he never imagined demand would plummet as it did.

“I play recreational hockey, and every friend I know that has season tickets, I’d say about 90% of them are trying to get out of it,” Schott said. “Some have club seats and can’t even get rid of those. They paid something like $330 a game, and they’re selling in the $150 range.”

None of his buddies could get out of their contracts, he said. The Kraken wouldn’t comment on season-ticket holders trying to break contracts early.

The team allowed Schott to switch to a half-season package, but he’s still bound to the six remaining years to which he initially committed. Schott gets that the contract is binding and he should have considered that more before signing. But he feels the Kraken could have better ensured at least a .500 team, given that’s the sales pitch he heard.

“It was always part of the sales process,” he said. “It was like, ‘Oh, we’re going to be a competitive team. It should be easy to sell tickets.’ And that’s what you assumed. … You’d think from day one it was going to be a .500 team and contending to get to the playoffs. So that was a big disappointment for me, because the play was just not there.”

The Kraken’s ownership group built such lofty anticipation two years ago before announcing its team name and selling record levels of merchandise nationally that anything after would always likely be a tough act to follow.

Given all that, plus the pandemic, it’s possible the franchise’s energy was spread too thin. And that not enough attention was paid to ensuring the on-ice product would make as big of an initial splash as off-ice endeavors within a first-time NHL market where fans needed to be sold on hockey.

The Kraken have indeed taken a long-term strategy toward building fans, with Leiweke adding that more than one million people will pass through the training center by its anniversary this fall. Thousands of young hockey players began learning the game at the Community Iceplex, while the team held more fan watch parties at the facility’s restaurant once it opened following pandemic shipping delays.

The team also used the lifting of COVID restrictions to begin public autograph sessions with players and had others, such as injured forward Brandon Tanev, make visits to schools and other places.

But fans ultimately pay to see a good team. Instead, the Kraken were out of realistic playoff contention by December.

Kraken general manager Ron Francis has vowed upgrades this summer, using some of his estimated $23 million in available cap space and a plethora of future draft picks obtained at the March trade deadline to acquire players in trades, free agency or both. Francis said at the deadline the team isn’t aiming to “be good five years from now” and should significantly improve.

“We do have the cap space,” he said. “We do have the money. We still plan on being pretty active in free agency if we can be. Those are the things that can help us kind of turn things around.”

The issue of ticket value is more serious than season-ticket holders being unable to turn a profit reselling their seats online. Nobody enjoys paying $300 nightly for a season ticket while the person next to them spent only $150 for a single-game purchase on StubHub, SeatGeek or Ticketmaster.

Greg Cohen, a spokesperson for New York-based Ticket IQ, which uses proprietary software to track the resale list price of tickets on 90% of the secondary market, said Friday that asking prices for Kraken seats declined an NHL-worst 33% to $235, compared with $352 when the season began. Cohen added that ticket asking prices leaguewide rose 3% on average.

The Kraken still maintained the NHL’s third-highest asking prices on resale platforms, though those statistics don’t indicate what the tickets actually sold for — amounts typically much lower than asking prices, especially as the start of the game approaches.

The bulk of Kraken season-ticket holders purchased packages with three-year minimums. That means the Kraken have a season or two at most to drive value back up, or risk thousands of fans abandoning their tickets once contractual obligations end.

NHL teams rely heavily on ticket sales to sustain operations, given they lack the lucrative television deals of NFL, MLB and NBA counterparts.

The Kraken also hope the lifting of pandemic restrictions at games since March 12 will generate bigger crowds next season and increase ticket demand. The team said there already has been a 12% surge in tickets scanned at Climate Pledge entryways since the restrictions ceased.

That may be attributable to fans being less afraid of going to games. Also, of fans previously feeling encumbered by masks or lacking vaccination now attending. Fewer travel restrictions also mean more visiting team fans — especially crossing the border from Canada — could start showing up.

Leiweke and Francis wrote season-ticket holders in March that cost increases of 3%-5% for next season would be waived due this season’s lesser experience caused by the pandemic and weather. They also pledged to continue building a solid team, something Leiweke reiterated Friday.

“Climate Pledge Arena is beautiful, and our players have been inspired by the atmosphere our fans create,” Leiweke said. “On the ice, we have the core pieces in place from character players, to draft capital, salary-cap flexibility and a commitment to invest. It’s going to be a busy offseason, and our goal is to be a perennial playoff team competing annually to win the Stanley Cup.”

Season-ticket holder Schott would like nothing more than for that happen and ticket demand to increase.

“This is obviously a honeymoon period,” Schott said. “But you know, in two years, or if the (NBA’s) Sonics are coming back … this is the opportunity that they need to take. Because if the Sonics come in and they (the Kraken) are bad, they’re going to get overcome quickly in fan support with those (casual) fans. And I want them to succeed.”