MONTREAL, Quebec — Arguably the most discussed, dissected, lauded and criticized junior hockey player of the past two years is headed to the Emerald City to provide the Kraken with some dramatically boosted prospect strength up the middle.

And the Kraken hope that once 18-year-old centerman Shane Wright adjusts to professional hockey, he and future teammate Matty Beniers can dominate NHL the way they did others in the junior and college ranks.

Stunned gasps erupted Thursday night around the Bell Centre as the opening picks of the NHL entry draft went nothing like what many expected. Tenuously projected No. 1 choice Wright of the Ontario Hockey League’s Kingston Frontenacs tumbled into the Kraken’s hands at No. 4. 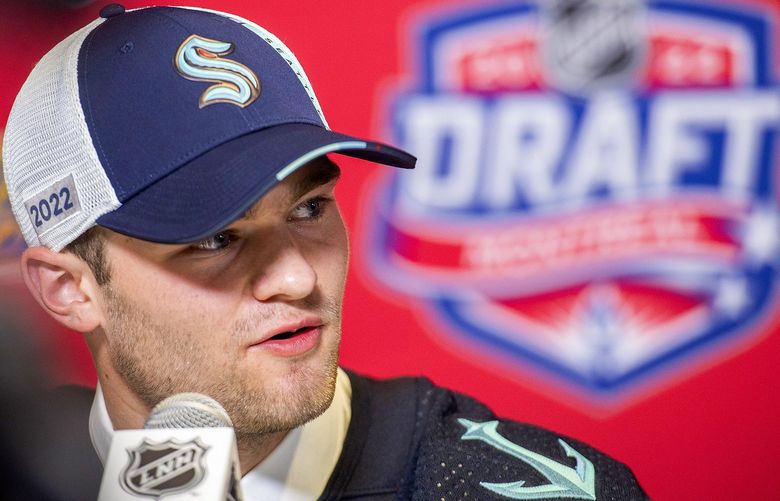 Kron, general manager Ron Francis, coach Dave Hakstol and others at the Kraken table knew there was a scenario in which Wright could fall their way. But for it to work, the Montreal Canadiens needed to bypass Wright and take Slovakian winger Juraj Slafkovsky at No. 1 overall.

Once that happened, to erupting cheers, boos and overall astonishment from the thousands of Canadiens fans watching from the stands, it was game on for the Kraken. After that, a New Jersey team already stacked with young centermen took Slovakian defender Simon Nemec at No. 2, marking it the first time two players from Slovakia had gone in the Top 10 together.

The Arizona Coyotes, as some had anticipated, also balked at Wright and used their No. 3 selection on center Logan Cooley from the U.S. National Team Development Program.

All of a sudden, a player for two years touted as the most likely to go No. 1 overall was there for the Kraken’s taking.

“We thought it was a possibility,” Francis said. “It’s not a bad way to start a franchise with Matty Beniers and Shane Wright as your No. 1 and 2 centermen.”

Seattle Thunderbirds defenseman Kevin Korchinski was another Top 10 surprise, using his strong WHL playoff performance to vault from a mid-first-round projection to No. 7 overall by the Chicago Blackhawks. David Jiricek, another defenseman some thought the Kraken might take, went at No. 6 to Columbus, and forward Cutter Gauthier went at No. 5 to Philadelphia.

Though Wright is still a teenager, Francis, Kron and others have long liked how his strong two-way play with a 6-foot, 198-pound frame should translate to the NHL. Francis plans to give Wright a chance at the big-league club out of training camp, meaning he won’t play for Canada in next month’s 2022 IIHF World Junior Hockey Championships.

The Kraken can send Wright back to his OHL club after camp or keep him for up to nine NHL games and then return him to the junior ranks if they feel he needs work. At age 18, he must be offered back to his junior club and cannot be sent to the AHL or other pro affiliate circuits.

That and the Kraken’s second-year composition give Wright a solid chance to begin his NHL career quickly, serving as a bright spot for him on a night that began in disappointing fashion.

“I was drafted by an NHL franchise,” Wright said when asked how he was processing the night’s developments. “I was drafted by a team with a lot of potential. It’s a great city with a great fan base. Obviously, you want to go first. It’s definitely something every guy wants to be able to do going into the draft.

Wright admitted he’ll use this night as motivation as well.

Wright has made headlines the past three years since being granted exceptional-player status to be drafted into the OHL at age 15 instead of 16. In his debut age 16 season, he established himself as a potential No. 1 NHL pick by scoring 39 goals and adding 27 assists in a COVID-19-shortened, 58-game schedule.

His star faded somewhat as the OHL shut down the following season. Upon his return this past campaign, Wright still put up an impressive 32 goals and 62 assists over 63 games — far exceeding his point-per-game output of two years prior.

Still, the expectations created by his 39-goal rookie season caused some disappointment and talk that the Canadiens might go with somebody else.

Nonetheless, Wright awoke Thursday in Montreal thinking he’d be starting his career there. Instead, he’s headed to the West Coast to join top prospect Beniers, taken at No. 2 overall last season and now plans to break training camp with the Kraken this October.

Wright said he’d had dinner with a couple of Kraken scouts and spoke with team representatives at last month’s pre-draft scouting combine. He also got to know Kraken assistant coach Paul McFarland when the latter briefly served as Frontenacs coach for an aborted pandemic season before the NHL team hired him last summer.

“We didn’t actually play any games under him,” Wright said. “But I know him from past Zoom calls and all that, so I got to build a relationship with him.

“So I know them pretty well,” he said of the Kraken. “I have a pretty good understanding of what they’re about, and I really liked everything they’re building.”

And the Kraken like that they’ll soon be building at the NHL level with Wright.

“I’m absolutely thrilled to have had the opportunity to pick Shane and to have him join our group,” Hakstol said. “I’m really excited about that.”