While the NHL expansion draft may have lacked suspense, the celebration surrounding the Kraken’s official introduction to the world on Wednesday was captivating.

But what about the roster?

In selecting players from the 30 eligible NHL teams, the Kraken built a solid foundation of veteran and youthful players.

Off the bat, though, general manager Ron Francis appeared a bit tentative in his approach, according to members of the national media. While remaining cap space leaves room for optimism, Seattle’s lack of stars seemed to cloud its first impressions.

Here’s what the national media had to say about the Kraken’s haul in the expansion draft. 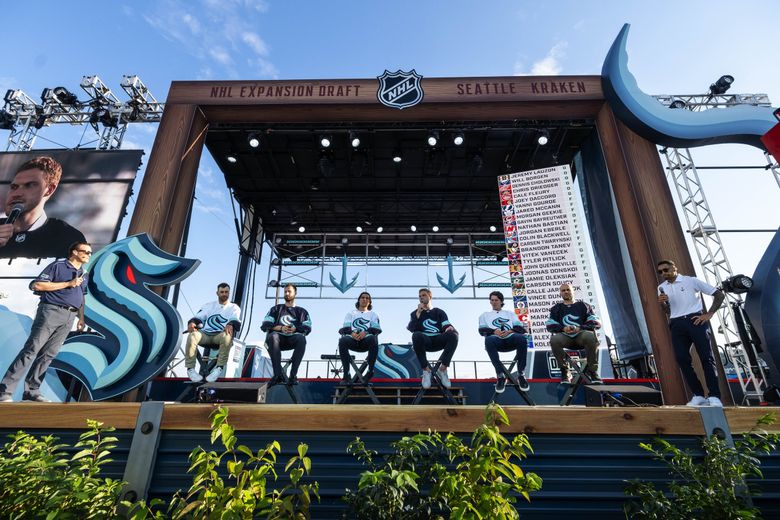 The Score’s Josh Wegman sums up the concerns about Francis’ plan well in listing the Kraken among his expansion-draft losers.

General manager Ron Francis took an interesting approach. … He passed on several proven players in exchange for ones with minimal experience. This isn’t to say the Kraken should’ve taken Carey Price or Jakub Voracek, but James van Riemsdyk, Vladimir Tarasenko, and Max Domi would’ve made sense. Francis’ strategy gives the Kraken ample cap room (around $30 million) but leaves them with several roster holes up front. It might be too early to judge Francis until we see how he spends his remaining cap space this offseason, but it’s hard to feel overly optimistic right now.

Wegman, however, believes goaltender Chris Driedger comes out as a winner.

Two years ago, Driedger split his season between the ECHL and AHL. Now, he’s locked into a three-year contract and gets to be the guy in net for an NHL team. Vitek Vanecek and Joey Daccord aren’t major threats to the starting job. Driedger could be poised for success thanks to the personnel around him. The Kraken’s blue line projects to be the strength of the team and there’s still room for more additions. Additionally, head coach Dave Hakstol is a defensive-minded bench boss who will try to put his netminder in a position to succeed – especially since the team will need to win low-scoring games due to a lack of firepower up front. Driedger’s NHL sample size is small, but in 41 games, he’s posted a .926 save percentage and a 2.18 goals-against average. At 27 years old, he could conceivably cash in on another contract down the road if he performs well.

USA Today’s Mike Brehm sees what Francis did a bit differently, but lists the Kraken’s lack of star power as a downfall.

On Francis: He said before the expansion draft that salary cap space was his biggest asset and he has assembled a team that according to Capfriendly.com, has nearly $29 million available to spend. He persuaded free agents Chris Driedger, Adam Larsson and Jamie Oleksiak to join the team. He has solid organizational depth on defense and he picked versatile players who can move up and down the forward lineup.

On star power: A lot of big names with big salaries were available, including Carey Price, Ryan Johansen, Tarasenko, James van Riemsdyk and others. But Francis avoided those players. His biggest-name players are Giordano, Gourde and Jordan Eberle. But star power isn’t as important for expansion teams. The Kraken will sell out, regardless, and the team will develop its own stars.

Among his winners and losers, Bleacher Report’s Lyle Richardson was split on how the Kraken might perform on offense and defense. He sees the defense as a strength, while the offense lacks a punch.

On defense: A solid defense corps was behind the Vegas Golden Knights’ successful first season. The Kraken seem to be following that template for their initial roster. It’s a good mix of veterans and youth with size and a variety of skills and experience. Leading the group is Mark Giordano. … The 37-year-old remains among the league’s upper echelon of defensemen. He will bring years of leadership and experience to the Kraken blue line. … Having signed Chris Driedger and selected Vitek Vanecek and Jason Daccord, the Kraken head into next season with a propitious but still inexperienced group of goaltenders. The defense in front of them, however, should ease their burden next season.

On offense: Seattle has what appears to be a solid defense corps with plenty of potential. However, the same cannot be said for its scoring punch. Based on their selections, the Kraken will have a difficult time finding the back of the net on most nights next season. Jordan Eberle is the only true top-six forward. The 31-year-old former New York Islanders right winger has reached at least 40 points eight times in his 11 NHL seasons. Versatile center Yanni Gourde was a middle-six forward on a deep Tampa Bay Lightning roster. The 29-year-old has tallied 48 or more points twice in his six NHL seasons. … Perhaps Kraken general manager Ron Francis has some moves up his sleeve in the trade market to boost his offense. He could also pursue some scorers when the free-agent market opens on July 28.

In analyzing the Kraken’s draft haul, For the Win’s Mary Clarke graded every selection. Mark Giordano, Adam Larsson and Chris Driedger all earn A+ grades, while Seattle’s pick from Detroit gets an F.

On Giordano: Mark Giordano is more than likely set to be the face of the Kraken franchise for at least the upcoming season. And why not? Giordano has been captain of the Calgary Flames since 2013-14, won a Norris Trophy in his age 35 season just two years ago, and still has gas left in the tank. With this pick, the Kraken solidify one half of their top pair and also get who seems to be an all-around good guy to boot.

On Dennis Cholowski: In the midst of a rebuild of their own, the Red Wings didn’t have much to offer the Kraken. Still, Seattle chose defenseman 23-year-old Dennis Cholowski out of Detroit, adding to their growing pool of young, unproven defensemen who have mostly had chances at the AHL level.

Clarke then gives the Kraken an overall grade of C-.

It’s hard to roast the Kraken here just yet, as the upcoming entry draft and free agency period will be were the meat of their deals are made. General manager Ron Francis and company clearly have a different team building philosophy than the one former Vegas Golden Knights general manager George McPhee had during their expansion draft, as Seattle seems like they’ll be playing the longer game than the 31st NHL team. Still, it’s hard to look at the board of players left by the Kraken and not think this team left some damn good pieces on the table at the end of the night in a clear missed opportunity.

One of NHL.com’s Alison Lukan’s biggest takeaways from Wednesday’s event: The city of Seattle made a great impression.

For people not from Seattle, they may think it’s all rainy days and cups of coffee. But there couldn’t have been a more perfect day for the Expansion Draft to show off what Seattle is all about. Before Wednesday, people may not have known about Gas Works Park, or how the city looks when the sun shines down on Lake Union; or how we come out to support not just our sports teams, but also one another. People may not have known how good the Kraken jerseys would look in their debut, or which players would be wearing them, but now they know. Well done, Seattle!

Here’s a look at the Kraken’s roster as Seattle selects players from each of the 30 eligible NHL teams.