The Kraken’s expansion selections, one from each of 30 teams, consisted mostly of hard-nosed, workmanlike types better suited to taxi drop-offs in the nearby parking lot than glitzy surprises in front of a live ESPN2 television audience. Once the possibility of the Kraken taking Montreal Canadiens star goalie Carey Price or Colorado Avalanche captain Gabriel Landeskog was eliminated earlier in the day — along with any suspense as the entire player list was leaked by media outlets — all that remained was the show.

And quite the show it was, with around 4,000 people crowded into the park for the ticket-only event on a sun-kissed afternoon with dozens of nearby boaters filling Lake Union to watch the festivities. By the time it was done, the Kraken had built a solid foundation of veteran and youthful players alike, a mostly hungry, cost-contained group that is almost guaranteed to grow with bigger free-agency additions in coming weeks. 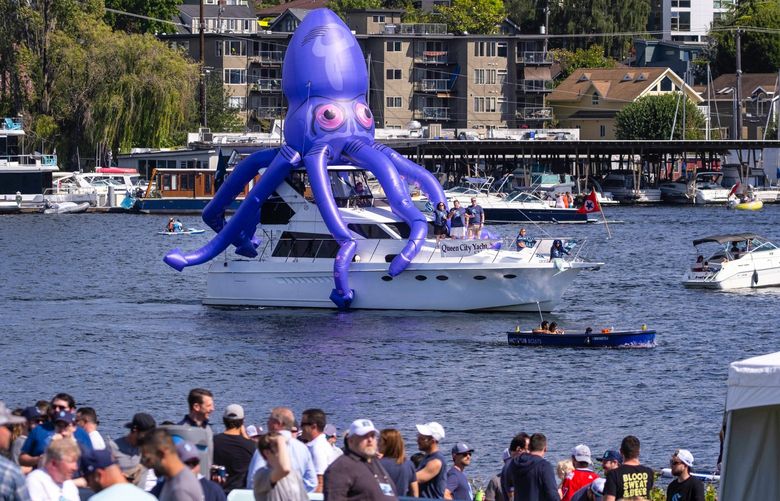 “There’s a real good mix of different abilities at all the positions,” Kraken coach Dave Hakstol said once the players had been announced, with six introduced on the draft stage. “There’s a ton of character. And there’s a ton of competitiveness on that board. That’s a great starting point.”

One of the notable pickups, former Calgary Flames captain Mark Giordano, 37, epitomized the makeup of the player group when he quipped to the crowd: “This is the first time in my career I’ve ever been drafted.”

Giordano signed with the Flames as an undrafted free agent in 2005-06 before embarking on a 15-year career with them that saw him named captain in 2013. In 2018-19 he became the fifth NHL defenseman to record a season of 60 or more points after age 35.

A team source indicated after the two-hour broadcast was done that the Kraken indeed plans to be highly active once the league’s free-agency period opens July 28. The 30 selections included 22 players under contract for next season at a salary-cap commitment of just under $52.55 million.

That leaves ample space beneath the league’s $81.5 million cap limit to add proven offensive firepower through free agency and trades. That largely was missing once the dust settled on Wednesday’s flurry of announcements.

Of the six players the team managed to get on site for Wednesday’s announcements, at least one, right wing Jordan Eberle of the New York Islanders, is known for putting the puck in the net — having done so 241 times the past decade as a perennial 20-goal scorer.

The Kraken also likely had its future No. 1 goalie on hand. It wasn’t Price, but a player with the same agent in Chris Driedger, 27, a Florida Panthers backup who reportedly has agreed to a three-year, $10.5 million contract.

There were also players such as Yanni Gourde, 29, of the Tampa Bay Lightning, and Mason Appleton, 25, a pair of feisty centers who performed well in the recent Stanley Cup playoffs. Kraken general manager Ron Francis said Gourde will miss the first couple months of the regular season after undergoing shoulder surgery.

And two more moderate free-agent deals were struck with defensemen, one for four years and $16 million with Adam Larsson, 28, from the Edmonton Oilers and another for a reported five years, $23 million with Jamie Oleksiak, 28, from the Dallas Stars.

Oleksiak carries the distinction of being the NHL’s heaviest player — 6 feet 7 and 255 pounds — and leaves little doubt the Kraken will look to play the body hard when its season opens Oct. 12 on the road against the Vegas Golden Knights.

The team’s home opener at Climate Pledge Arena is Oct. 23 against the Vancouver Canucks, with the rest of the schedule to be released by the league Thursday.

“We need to be a tight group and work hard together,” Hakstol said. “We’re going to have good detail, but we need to do the work so we can enjoy the fruits of that with winning games, enjoying each other and that winning atmosphere.”

Francis, his front-office assistants and analytics staff had spent months sifting through players who might be exposed in the draft. By Saturday he had players to pick from, and knew he needed to take at least 14 forwards, nine defensemen and three goalies, then four remaining players from any position.

At least 20 needed to be under contract for next season. The Kraken picked 15 forwards, 12 defensemen and three goalies.

“You’re looking at how they played, you’re looking at the analytics on it, you’re looking at what their medical records are,” Francis said. “There’s a lot of things you’re trying to balance as you make these decisions, and a big part of that, too, is the dollar amount — the cap space — so my team did a good job analyzing everything. And I think what we ended up with is a team we’re very proud of.”

Francis had weighed the merits of adding Canadiens goalie Price long before the surprising news that he had been left exposed in the draft. The Kraken did additional diligence in the days since but concluded that his remaining five years at a $10.5 million annual salary-cap hit, for a 33-year-old with knee and hip issues, didn’t fit the team’s plans.

Instead, Francis selected Canadiens defenseman Cale Fleury, 22, who joins his older brother, blue-liner Haydn Fleury, 25, also taken by the Kraken from the Anaheim Ducks. And in the nets, he went with free agent Driedger, as well as youngsters Vitek Vanecek, 25, from the Washington Capitals, and Ottawa Senators backstop Joey Daccord, 24.

“Anytime you hear Carey Price’s name, with his accomplishments you have to seriously have that consideration, and we did,” Francis said. “We had those conversations, but Chris (Driedger), we think, is an up-and-coming goaltender and we looked at where we were and the possibilities with (Vitek) Vanecek on the board. We also think there are good, young guys with upside potential, so we decided to go in that direction.”

Driedger views this as “an incredible opportunity for me” given he slots in as a potential No. 1 goalie after his backup role in Florida behind Sergei Bobrovski. For a time he also wondered whether Price was coming and might bump him to a backup role again.

“There was obviously a situation where Carey Price could have come, and it would have been a similar situation to what I was in in Florida,’’ he said. “I thought about that, and I said, ‘You know what? It doesn’t matter. I’m not going to worry about that.’ I’m going to play my game and do what I do to be successful.”

Islanders selection Eberle agreed, saying this is an opportunity for many players to seize.

“This is a fresh start for a lot of guys,” he said. “When you get that and you put yourself in a situation where everyone’s new, there’s no past history with this team, it’s going to be a competitive (training) camp.”

And given the player makeup he saw chosen Wednesday, not a camp for the faint of heart.

“There’s a lot of guys that I look at that I’ve obviously played against quite a bit, and they’re hard-nosed players. Definitely excited to see them in the same jersey, because they’re not fun to play against, so that’s definitely the kind of character you want on your team.”

Here’s a look at the Kraken’s roster as Seattle selects players from each of the 30 eligible NHL teams.