It survived the closure of the racetrack it is named for, it survived being moved to the other side of the state for three years and it survived a pandemic.

The tradition continues Sunday at Emerald Downs with the 86th running of the race.

The first Longacres Mile was in 1935. Joe Gottstein, owner of the racetrack in Renton that opened in 1933, came up with an idea to get his track some big publicity — it would hold the richest race in the country for one mile, a distance a bit too long for sprinters and a bit too short for route horses.

His plan worked. Sixteen horses were entered into the first Long­acres Mile in 1935, with a purse of $12,350. That was enough to attract a stellar field, including Biff, a grandson of Man O’ War who had just won the $5,000 Chicago Handicap. 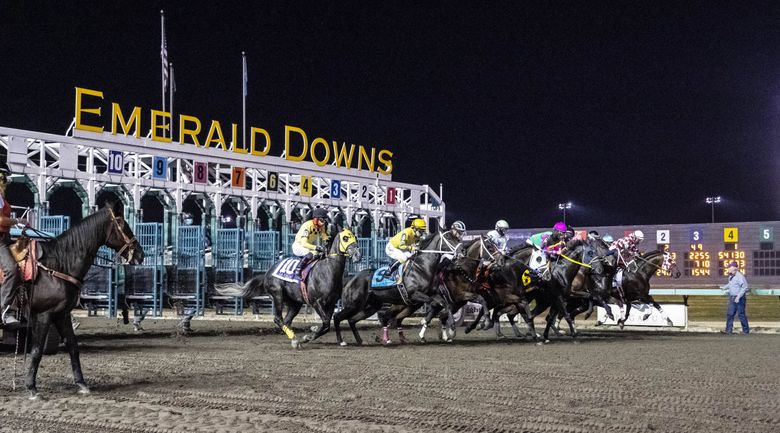 It was the start of a summer tradition in the Seattle area, with the only absence being in 1943 during World War II.

When Longacres closed after the 1992 season, and a replacement in the area seemed years off, the race appeared to be in danger. For three years, it was held in Yakima.

Emerald Downs in Auburn opened in 1996, and its signature race would keep its name: the Longacres Mile.

The Bob Baffert-trained Isitingood won the first Longacres Mile held at Emerald Downs in front of a huge crowd. There have been 24 since at the Auburn racetrack, and seldom has it disappointed.

Not even last year, when the race was delayed by a month and moved to a Thursday because of the coronavirus. It was weird not having fans, but when Anothertwistafate came thundering down the stretch for a 4 1/2-length win, things seemed normal for a few seconds.

The Longacres Miles at Emerald Downs have had fantastic finishes, great local hopes and invading stars.

Ask 10 people to list their favorites, and you will likely get 10 different answers. Here are one writer’s top 10 Longacres Miles at Emerald Downs (in chronological order) with apologies to the rest.

Bob Baffert was an up-and-coming trainer in Southern California when he brought up Isitingood for the first Longacres Mile held at Emerald Downs. For Baffert, the seven Kentucky Derby and two Triple Crown winners — along with drug-test controversies — would come later.

Isitingood, partially owned by Mike Pegram who was living in Mount Vernon, took charge in the stretch and held off the late-charging Big Ten to win by a neck.

“Turning for home, I thought he’s either going to stop or explode,” Baffert said after the race. “He exploded.”

Isitingood became one of the best horses in the country. And a tradition at Emerald Downs had begun.

Jeffrey Sengera wanted badly to own a horse that won the Longacres Mile. His father had trained Mr. Prime Minister, who was never a factor in the 1981 Mile as a 112-1 longshot.

That race certainly made an impression on the youngster, who had come to Renton to watch his father’s horses. Seventeen years later, he claimed Budroyale for $50,000 for the purpose of running him in the Longacres Mile. He finished seventh in the 1998 Longacres Mile, but came back the next year and made a dream come true.

Ridden by Hall of Famer Garrett Gomez, Budroyale prevailed in a long stretch dual with Mike K to win by a half-length, the first time a horse from the No. 8 post had won the Mile.

Budroyale finished second in the Breeders’ Cup Classic a few months later, but there was no doubt which accomplishment meant more to Sengera.

“Jeff wanted the Longacres Mile more than the Breeders’ Cup Classic, the Dubai Cup and the Kentucky Derby — anything,” said Budroyale’s trainer Ted H. West after the Mile win. “It was his No. 1 goal ever since he got the horse.”

It was certainly no surprise that Sky Jack, a 7-year-old gelding, won the 2003 Longacres Mile. He was a 7-5 favorite, having won the prestigious Hollywood Gold Cup the year before.

It was the way he won that made the race unforgettable. Locked in a three-way battle entering the stretch, he exploded in the stretch to win by a race-record 6 ¼ lengths in a then track-record time of 1 minute 33 seconds. It had to be one of the easier wins for Russell Baze, a Washington native who is the winningest jockey in North American history.

When 60-1 longshot No Giveaway fell behind by 20½ lengths midway through the race, it seemed that his chances were over.

But with Juan Gutierrez riding, the horse started passing horses quickly and pulled away to win by 2½ lengths, becoming the biggest longshot to win the Longacres Mile, a record that still stands.

It was redemption for No Giveaway owner Herman Sarkowsky, an original investor in the Seahawks, the Portland Trail Blazers and Emerald Downs. In 1971, he owned Titular II, who seemed certain to win the Mile before breaking stride when catching a glimpse of the starting gate in the infield and was passed near the wire.

Sarkowsky had horses win races worth much more money, including in the Breeders’ Cup, but said winning the Mile was his biggest thrill.

Flamethrowintexan, the local star, battled the star invader, Papi Chullo, the entire length of the stretch in what might be the most exiting Mile at Emerald Downs.

It appeared Papi Chullo momentarily took the lead, but Flamethrowintexan battled back to win by a neck and give trainer Jim Penney his record fifth Mile victory.

“He bumped us a couple of times,” said Ricky Frazier, jockey of Flamethrowintexan. “Tex just loves to fight back and he wouldn’t let him go by.”

Crockett, the founder of Emerald Downs and the track’s president for two decades, had owned horses that won big stakes races across the country, but victory in the Longacres Mile had eluded him.

It became clear in the stretch of the 2007 Mile that Crockett’s horse was going to win: But which one?

“It would have been great to have a dead heat,” Crockett said after the race. “This is the highlight of my racing career, which started in 1974.”

Wasserman was very good for several years at Emerald Downs, and in 2008 he was great. He won four stakes races that season, with jockey Jennifer Whitaker letting the horse fall way back early, then making a big charge late.

Wasserman wasn’t one of the wagering favorites in 2008 Mile, going off at 10-1, but it was clear he was the fans’ choice when he came storming down the stretch to thunderous applause, taking the lead just before the wire to win by a neck.

Whitaker is still the only female jockey to win the Longacres Mile.

“He always tries,” Wasserman trainer Howard Belvoir said of the horse afterward. “He’s like a poor man going to work; he shows up no matter what, whether he’s sick or got a sore foot.”

Noosa Beach is one of the greatest horses to run at Emerald Downs, and this might have been the local hero’s greatest race. Noosa Beach’s right foot was stepped on coming out of the gate, keeping the horse from switching his lead foot in the stretch. No matter, he held off a fast-charging Jersey Town to win by 1½ lengths.

“I wasn’t nervous because he was pulling away, but I was wondering why he wasn’t switching (his lead foot),” trainer Doris Harwood said after the race.

Local star Noosa Beach was ahead in the stretch in search of back-to-back Mile victories, but star invader Awesome Gem started to close in. Noosa Beach, assigned top weight of 125 pounds, tired late, and Awesome Gem won by 1 1/2 lengths for another big win in his great career.

Awesome Gem won the Grade I Hollywood Gold Cup in 2007, was third in the Breeders’ Cup Classic in 2009 and finished with career earnings of more than $2.8 million. He needed all of his class to chase down Noosa Beach.

“The only horse I was concerned with was Noosa Beach,” said Awesome Gem jockey David Flores.

It was never hard to find Stryker Phd early in a race, because he was always at the back of the pack.

But then came the inevitable rallies, with the horse making up tremendous ground in the stretch with huge strides. Jockey Leslie Mawing rallied Stryker Phd from last place (12th) to win the 2014 Longacres Mile.

Favored again in 2015, the Washington-bred made another eye-catching rally to join Simply Majestic (1988-89) and Trooper Seven (1980-81) as the only horses to win the Mile two straight years.

“He makes that great move every time,” Stryker Phd trainer Larry Ross said after the race. “And once he gets into the lead, nothing is going to stop him.”