At age 4, Natalya Dufour put a hockey stick in a five-gallon bucket and went out on the ice.

This ingenious setup allowed her to hold on to the edge of the bucket for balance while skating and then take the stick out to shoot the puck.

“I just felt pure joy at that moment,” Dufour said. “And I’ve loved it ever since.”

Now 11, Dufour plays defense for the Lady Admirals, an all-girls hockey team with the Seattle Junior Hockey Association (SJHA). But when she began playing, Dufour was usually the only girl on her coed teams.

“Not seeing a whole lot of girls out there kind of discouraged me, because there weren’t a lot of people of my gender to boost my confidence a little bit,” Dufour said. “But then at the same time I was thinking, ‘I can show the girls that they can play with the boys, too. I can be an inspiration.’ ”

And she was. Nate Dufour, Natalya’s father, says that over the years, several parents have approached him to say their daughters saw Natalya on the ice and were inspired to join a team.

Professional hockey has long been dominated by white, male players and leadership. They also tend to be perceived as nondisabled, cis-gendered and straight. That homogeneity is reflected in the nonprofessional and junior leagues too, but in the Puget Sound area, young people and underrepresented groups are taking to the ice to change that.

With Seattle welcoming its first major professional team since 1924 this fall, Lady Admirals coach Andrea Finatti predicts that excitement for the Kraken coming to town will encourage more people to take to the ice.

That’s what happened when the San Jose Sharks came to the Bay Area when Finatti was growing up there.

“I was a product of an NHL team coming to the area when I was [my players’] age. So I’ve seen what bringing an NHL team to a city can do,” she said. “The team came, and interest boomed.”

Twenty-five years ago, girls hockey didn’t exist in the Bay Area, she said. Now there are several all-girls and even all-women’s teams there, some of which Finatti has been part of.

Here in Seattle, Finatti says, there’s a huge push for diversifying the sport. With those efforts and an increased interest in hockey, she hopes the next generation of professional players will be more diverse.

“It’s a male, white sport,” she said. “You want to see people like you, and when you don’t, you don’t think that’s something you can do.”

Though the NHL remains mostly white and male, Seattle players and coaches are creating safe environments and breaking down barriers that keep women, people of color, LGBTQ+ and disabled players from participating.

Rainbow-colored tape flashed on the blades of hockey sticks as they struck the ice. On players’ helmets, pronouns were written next to their names — he/him, she/her, they/them. Players competed under the banners of teams named after LGBTQ+ icons like “Team Marsha P. Johnson,” “Team Harvey Milk,” and “Team Laverne Cox.”

“To be able to sit down in a locker room and have your captain ask for introductions around the room and say, ‘Who’s your favorite NHL player, and what are your pronouns?’ ” Gale said. “It’s just another really fun way to encourage folks to ask these questions and hear what it’s like to be in a really safe space.”

Both gay hockey players, Thompson and Gale met through an adult hockey league in Seattle when Thompson spotted the rainbow colored “pride tape” on newcomer Gale’s hockey stick. Conversations between the two eventually led to the creation of SPHA, a group built to support LGBTQ+ hockey players and bring queer players and allies together to create inclusive environments in a realm that is still “a hypermasculine sport typically dominated by straight white men,” Gale said.

“A lot of players may feel afraid,” Thompson said.

Thompson certainly did. When he began playing in his late twenties, he had never played sports before and wasn’t sure his gay identity would be welcome in a sport that’s so heavily associated with the macho male archetype.

When he expressed his fears to his team manager, she chuckled and assured him that their team was very inclusive.

“I was petrified,” Thompson said. “Had I not had her as that sounding board, I may never have actually gone ahead and done it.”

That’s Thompson’s personal reason for creating SPHA — he wants to be that sounding board for other players. SPHA is still pretty new (formed in 2019), and Thompson and Gale want to ensure the organization’s leadership eventually reflects the diversity of the LGBTQ+ community as well.

“If I were not a white guy and I looked at the sport from an outside perspective, I would absolutely not feel welcome to play,” Thompson said.

That’s why it’s important not just to change the culture of hockey and create safe spaces, but to have visible representation of LGBTQ+ players and players of other marginalized identities as well, Gale said.

For some, hockey can present accessibility issues when equipment and ice rinks are built for nondisabled people.

Leah Cupps, 45, first learned about the Seattle Adaptive Sports sled hockey team while donating one of her wheelchairs to a Seattle adaptive basketball league.

After her first time on the ice, Cupps fell immediately in love with it. She joined a team the next week.

Sled hockey players use specially designed sleds that sit on two hockey skate blades. They play using two shortened hockey sticks with ice picks on one side for propelling themselves on the ice, and a hockey stick blade on the other to maneuver the puck.

Cupps, who was not disabled for most of her life but became ill in her 40s, says playing sled hockey is one of the few places where she feels “equal with everyone again.”

“It’s that wonderful sense of camaraderie that you have a hard time finding anywhere else,” she said. “As a disabled person, there are roadblocks in life that we experience on a daily basis. … We have to plan ahead and think about access issues and just getting around in an able-bodied world.”

The Kraken Community Iceplex in Northgate has wheelchair accessible entrances so disabled players can skate directly on and off the ice in their sleds.

“It’s the little things about the design of the building that speak to us and tell us that we’re welcome and we’re valued,” Cupps said.

Cupps believes making hockey more inclusive in Seattle will be supported by the Kraken, whose financial investments and partnerships, she says, can help bring attention to groups providing inclusive opportunities and help ease the financial cost of hockey. 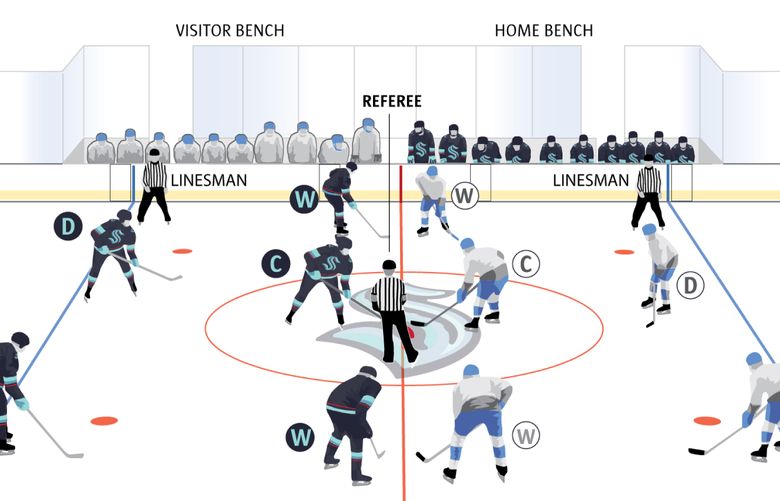 A Kraken fan’s visual guide to hockey and the NHL

The Kraken has already developed several partnerships, such as one with the Black Girl Hockey Club (BGHC) that led to a line of Kraken-BGHC hats and brought attention to BGHC’s scholarship program that helps relieve the cost of equipment and tournament fees for players. Local hockey player Maealie Glanzer recently won the scholarship. This month, the Kraken also launched a partnership with Refugee Women’s Alliance Early Childhood Learning Center (ReWA) through which 60 players ages 4-5 from low-income and immigrant families will participate in a free, weekly learn-to-skate program.

“Hockey is more than 30- to 40-year-old white male stand-up hockey players; it’s everyone. It’s children in wheelchairs, it’s little girls that want to play and want to identify and see a piece of them as a role model,” Cupps said. “I had no idea how lucky I was until I was able to sit there and watch the Paralympics and see sled hockey as a platform, and being able to identify with people in my same age group and ability level out there on the national stage representing our country.

“It’s the same for a little girl being able to see the USA Women’s hockey team bring home the gold.”

That’s how it worked for Dufour.

Even with her passion for the game, Dufour wasn’t sure hockey was something she could do for a living. Then on her ninth birthday, her parents bought her tickets to see her first professional women’s hockey game.

“After that, I started thinking, ‘Wow, you can actually go really far in just playing hockey,’ ” Dufour said. “It really inspired me to go out there and [think], ‘I can do that, too.’ But you have to put the work in.”

When she grows up, she hopes to play in the Olympics and be the first female hockey player in the NHL. (In 1992 and 1993, Manon Rheaume became the first woman to play with the NHL, but she played only in preseason games with the Tampa Bay Lightning.)

There is also a national women’s professional league — the Premier Hockey Federation (formerly the National Women’s Hockey League — NWHL), but it doesn’t attract as much attention or funds as the NHL.

A similar problem plagues the junior leagues. Finatti says girls teams often lose their most skilled players to boys-dominated coed teams because they’re looking for more of a challenge.

“It’s not that the boys are better, there are just more boys,” Finatti said.

Though Finatti supports her players’ dreams of one day playing in the NHL, she hopes they also think about women’s professional leagues such as the PHF.

“It doesn’t always have to be playing with the boys to make it work. What’s wrong with having a really good women’s league?” she said.

So why does it matter that hockey is diverse? For the Dufour family, it’s about the feeling their daughter gets when she’s on the ice.

“When I get home after a bad day, I’d get on the ice and everything would just blow away,” Natalya Dufour said.

Twenty-five years ago, when it was more difficult for girls to play male-dominated sports, their daughter might have missed out on that.

That’s why Calle Shanahan, 12, who also plays defense for the Lady Admirals, says she doesn’t want to be the first woman to play in the NHL.

“I don’t really want to be the first,” she said. “I’d rather there be a lot of women before me.”

The puck has finally dropped in Seattle, and the Kraken are already making an impact as the city’s coolest new pro team. Whether you’re a seasoned hockey expert or a newbie on the scene, here’s a look at hockey culture and hockey-related things to do in Seattle.