Your average Antarctic penguin or happy-hour bartender has nothing on Tom Conroy when it comes to handling ice.

As the new vice president of operations for NHL Seattle and the Oak View Group, Conroy is tasked with ensuring some 300 annual events at a rebuilt KeyArena go off smoothly. And considering hockey’s role come October 2021, his knowledge of all things ice-related will play a big part. 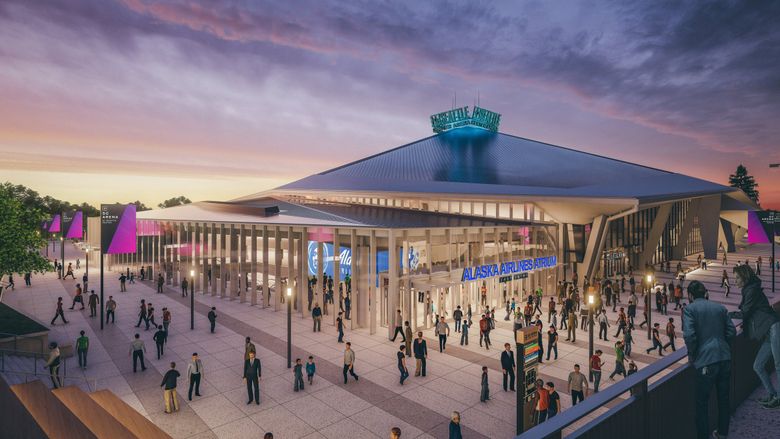 His experience includes time with the operations crew at Northeastern University’s Matthews Arena while attending the school in the 1980s. From there, he was assistant operations manager at an arena in Maine, then an operations manager for rinks at the University of Massachusetts, another in Manchester, England, and then the Senators’ Ottawa Palladium/Corel Center from its 1996 opening.

So, he’s seen hockey’s style and strategy change over time, requiring the surface to keep up.

“Today’s game is a track meet,’’ Conroy said. “The players are much more finely tuned than they were 10, 15 or 20 years ago. It’s become a faster game. It’s a turning game, not a stop-and-start game.

“So, that lends itself to wanting to have hard, fast ice.’’

That’s not as easy as running out Zamboni or Olympia resurfacing machines more often, which can thicken ice and worsen skating. And with NHL players topping 25 mph on skates, non-optimal ice can be a horror show, resulting in poor passing, missed shots and fluky goals.

Or, you get the “Fog Game’’ in Buffalo from the 1975 Stanley Cup Final, where the arena had no air conditioning and outdoor temperatures approached 80 degrees. The resulting humidity caused the ice to start melting and mist to rise off its surface, which eventually blanketed the Philadelphia Flyers and hometown Sabres in a shroud that caused a dozen game stoppages.

During a 1991 exhibition between the Los Angeles Kings and New York Rangers at a temporary outdoor rink in Las Vegas, puddles formed on the ice surface and a swarm of grasshoppers became frozen into it. Rangers enforcer Tie Domi claimed he’d tripped over one, foiling a breakaway chance.

An anonymous NHL Players Association poll in 2018 said Montreal, Edmonton, Winnipeg, Minnesota and Calgary  had the league’s top ice surfaces, while Florida, Arizona, the New York Islanders, Anaheim and Carolina had the worst.

A Carolina Hurricanes home game against Detroit at PNC Arena was postponed in 2016 when a broken ice compressor left melted spots on the surface. In 2017, an exhibition game in Arizona between the Coyotes and Los Angeles Kings was canceled after a prior night’s concert left the ice unsuitable.

Conroy keeps the arena temperature between 60-68 degrees throughout the day, and his facilities team might lower it around game time once LED lighting and fans heat up the building. Maintaining an NHL-mandated game temperature of 60 to 64 degrees safeguards against a poor ice surface.

Rink ice is made by refrigeration systems pumping water onto a subfreezing concrete slab floor. But because heat rises and ice insulates, the ice surface is warmer than the floor and can wreak havoc on ice shavings – snow – produced when players skate on it.

“What will happen is, if your arena gets too hot, the snow on the top of the ice could get soft and melt and then refreeze,’’ Conroy said.

That can make a smooth surface bumpy, potentially ruining the game and endangering players.

While ruts from skate blades form even on well-maintained ice — and are fixed by pouring slushy water over them — the injuries underscore the dangers of unsmooth surfaces. The NHL even stipulates that walkway mats leading to player and referee dressing rooms must be swept and mopped pregame and between periods to avoid debris being tracked on to the ice.

Surface ice temperature is taken three to four times per period using a thermal laser thermometer. Conroy aims for 18 degrees when arena crowds enter, then a game temperature of 22 degrees and never exceeding 24.

Ice can also get too cold and crack in places — often due to cold weather outside the arena — so temperature is adjustable with cooling and heating systems beneath the floor.

While ice resurfacing machines “clean” by scraping off a layer and replacing it with new water between periods, overdoing it causes ice to thicken. The thicker the ice, the warmer the surface compared to the bottom slab — making it tougher to keep adequately cool.

Conroy keeps ice thickness between three-fourths of an inch to 1¼ inches, for optimal skating and amplifying colors of lines, logos and advertisements embedded beneath the surface. Thick ice makes them appear faded.

“Bright colors, a nice bright, brilliant red line, or logo in the center of the ice, or blue line, that’s going to tell you there’s proper ice fitness,’’ he said. “Municipal rinks tend to run their ice thick because they’re constantly just running their Zamboni out there and making ice.

“So, it’s impossible to maintain an optimal ice temperature in arenas that get heavy use.”

When converting to other arena events, a thermal floor covering placed over the ice keeps it from having to be remade. Once uncovered, the ice is checked for ruts, drink spillage and other imperfections.

Conroy will eventually hire crews specializing in event conversions and ice maintenance. Prior expertise is key, with little time for on-the-fly learning at the NHL level.

“Maintaining the ice is something that’s simply a byproduct of a busy building,’’ Conroy said. “It’s a requirement no different than cleaning a building. It’s not overly difficult as long as you’re on it and dedicated to it and have a procedure.’’