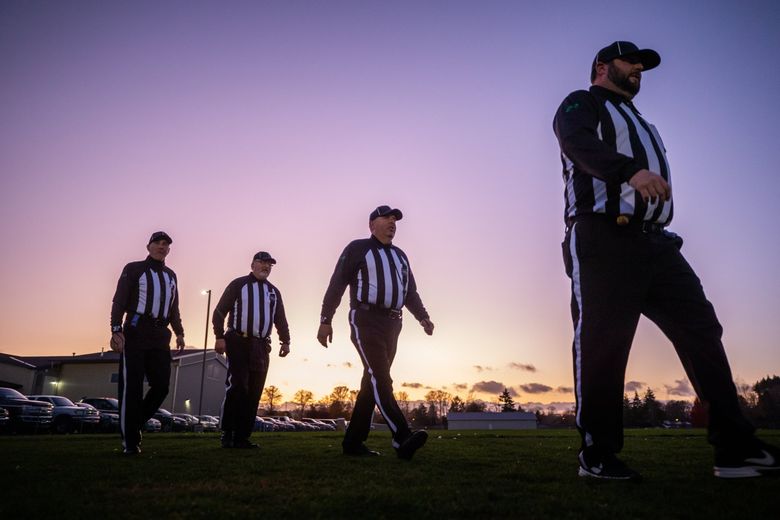 Where did the refs go? The Seattle Times spoke with several referees, who outlined a career they love but one of long hours, low pay and little respect.

They are the people who are always there. Easy to take for granted and even easier to unleash your frustrations upon. Here’s the thing: These zebra-striped, whistle-wearing men and women are becoming increasingly rare.

Officials around Washington say there is a growing disconnect between them and players, coaches and fans. It’s showing as the number of new referees dwindles and the industry struggles to replace its aging core, mirroring a trend seen nationwide. Games have already had to be rescheduled; if the pattern continues, they could start to be canceled.

The WOA has lost more than 1,500 members over the past decade, down to 6,153 in 2018-19, with an average age of 54. The numbers in basketball are particularly glum, down 12.2% just in the past three years, and Stordahl said football numbers decreased again this fall. The ratio of officials to athletes in Washington is at its lowest on record, with more than 28 high school athletes for every one official across all sports, down 23% from a decade ago.

“If the trend keeps going, we’re going to have to drop games,” Stordahl said, with freshman, C-team and junior-varsity games first on the chopping block.

As long as sports have existed, so have officials. And for about as long as officials have existed, they’ve been the favorite scapegoat of players, coaches and fans. Except for the lucky few, it’s never been a profession in which to make a living. Mostly it attracts former athletes hoping to stay involved and parents looking to give back.

Two years ago, the National Federation of State High School Associations (NFHS) launched a recruitment campaign amid what it called “an exodus of officials at an alarming rate.” It said only 2 in 10 officials made it past their second year. The yearlong campaign drew 1,200 new officials nationwide, but the number in Washington continued to shrink. While there is no national database, local shortages have been reported from wine country to corn country, Indiana to Pennsylvania and beyond.

So, how did we get here? The Seattle Times spoke with several referees around Washington. They described a career they love but one of long hours, low pay and little respect.

Every official has stories of that one fan. Most have enough to fill a book.

George Gunn has been umpiring softball since he moved to Seattle in 2014 and has developed a way of dealing with problematic fans: Recruit them to join the ranks. Or try, at least. At 6 feet 6, Gunn isn’t one to be intimidated by an overzealous spectator. He hands out business cards between innings. Think you can do it better? Well, we need you.

“Most of them go, ‘Ooh, ahh, I don’t want to deal with what you do,’ ” he said. “Parents’ constant yipping and yapping, it gets old. It wears on you.”

A 2017 survey by the National Association of Sports Officials (NASO) found that 57% of referees see sportsmanship on the decline, and it’s at its worst at the youth level. Parents and coaches are often less educated on the rules. Games are played in cramped conditions.

Feeling an urge to get back into basketball after her high school playing days, Jillian Quinn began refereeing AAU basketball around the south Sound.

The tour of tightly packed gyms is a common starting point for first-year officials. It’s also the environment least conducive to learning.

The players are fueled by adrenaline and drenched in sweat. The coaches can be loud and proud. Parents pack the baseline and surround the bench. It’s the same scene to your right and your left as two games go on simultaneously. When it’s over, there is maybe one angle of film to review.

Quinn, in her sixth year of officiating, doesn’t remember those games fondly.

“(Fans) are going to be upset when calls go against them. That’s just what we signed up for,” Quinn said. “However, there’s a right and wrong way to go about it. … When you’re having someone yell at you, and they’re literally standing right behind you, it’s a little different. …

“Something with AAU, with the parents and the coaches, has got to change. You have to do those levels to move up.”

Two-thirds of his officials quit before their fourth year, Stordahl said. It’s that fourth year that’s the key.

“Because once you’re there, you get that bug of officiating,” Stordahl said. “It’s the first three years that we’ve got to foster that relationship.”

The WIAA and WOA have taken measures to cut down on harassment, such as “Thank a Ref Week” — where officials receive thank-you notes, gift cards and, for one lucky crew, a crab bake in Ocean Shores — but their authority doesn’t extend beyond junior high and high school games.

Mentorship goes a long way. Quinn says she has a selection of mentors — one person she goes to for advice on fan interactions, another on the rules. Her mentors were instrumental in getting her through her first few years. She’s trying to return the favor.

“We absolutely want to get more women in it,” Quinn said. “And not only on the boys’ side. The numbers are still down on the women’s side as well. We want women officials. They want to see women officials officiate women’s basketball. We are still low on the numbers.”

Last year, Quinn was one of two women to referee the boys state basketball tournament. Women were just 6.4% of respondents to the NASO survey nationally; it was 7.9% in Washington.

Overall, a majority of respondents say they mentor other officials in one way or another. There are Facebook groups, email chains, even a Slack instant-messaging channel to ask questions, make connections and offer support. Quinn takes part in group messages every day.

Quinn, who works as a sales rep at Hewlett-Packard by day, escaped the AAU circuit and refs college ball as high as the NCAA Division II level. She dreams of making it to the Pac-12. When she’s not working, she’s reffing. And when she’s not reffing, she’s watching film. Or attending officiating conferences. Or mentoring younger refs. Or working out to stay in game shape.

There isn’t a day that Quinn isn’t talking about basketball.

“Except for my off day.”

“But maybe not. Because my off day’s that time where I can watch film and decompress and get ready for my next week of games.”

This, she says, is the “underground world” of refereeing — the side of officiating nobody on the field or in the stands sees.

For Quinn, a game day starts hours before tipoff. Whatever commute awaits from her Burien home, she must get to the venue 90 minutes before tip. When she gets home, often after 10 p.m., maybe she’ll flip on some film. Maybe she’ll climb right into bed.

Tyler Trimble usually opts for sleep. His day often begins at 4 a.m. to catch a flight to his next game. Trimble began reffing Washington high school basketball while he was still playing. After 17 years climbing the ranks, Trimble officiates women’s basketball for Division I conferences up and down the West Coast, including the Pac-12.

A weekend can take him to four cities. With the shortage hitting his hometown of Montesano, Grays Harbor County, particularly hard, he picks up high school football games during the week.

“You throw all that together, it’s a constant grind,” he said. “There’s really no days off.”

It was just this year that Trimble could support himself on his officiating salary. Few officials do it full-time, even at the college and pro level.

In Washington, a high school official can make between $62 and $69 for a varsity game, depending on the sport. Most earn between $1,000 and $5,000 annually, according to the NASO survey. The paycheck comes at the end of the season.

Too often, new officials get into it with false expectations, Stordahl believes. Making a hundred bucks in a night to ref a couple volleyball matches can be enticing.

“Well, I’m trying to get groups to stop saying that,” Stordahl said. “It should be the fifth or sixth thing to entice them in. It should be, you have a passion for basketball, why don’t you come officiate? Oh, by the way, you do get paid.”

Those are the ones who stick it out. The ones who grow up to be Tyler Trimble.

Trimble was a sports-obsessed kid. But he was equally infatuated with the officials as the players. He would carry a whistle with him everywhere “just in case someone asked me to referee.”

“I think it’s because they talked to me,” he said. “They were personable. They wanted to have a conversation.”

As he lives out his dream, Trimble doesn’t see that as much anymore.

“We are falling behind because the love is not there,” he said.

Officiating used to be one way people gave back to the community. Not only are officiating numbers on the decline, so is volunteerism. A 2018 analysis of U.S. Census Bureau data found fewer Americans are volunteering than at any point in the past two decades.

He points to one all-too-common occurrence.

“It’s always a last-minute, ‘I woke up late on a Saturday morning and, oh, I have the flu.’

“You don’t have the flu,” Stordahl said with a laugh. “Drink a thing of Gatorade, and you’ll be good to go by one o’clock.”

Recruiting new officials isn’t the problem; first-year refs make up about 10% of the WOA’s membership. It’s recruiting the right ones — and keeping them around.

Pondered Stordahl: “Are you Costco, who is out selecting their people coming in a lot better? Walmart’s bringing in massive amounts of people, and 50% of them don’t make it back the second year. So who are we?”

The answer to that question may just determine whether that Tuesday night soccer match is played, or that Saturday morning baseball game, or, yes, even that Friday night football game.