In the days after Gov. Jay Inslee’s Aug. 27 announcement updating vaccination mandates, those who assign games to Washington sports officials began to wonder how they would cover high-school and middle-school contests.

The mandate for all school employees being required to be vaccinated against COVID by Oct. 18 extends to contractors performing duties on school grounds.

Those contractors include officials for games.

“Initially, an assignor doesn’t know what his officials have or haven’t done,” Washington Officials Association executive director Todd Stordahl said. “The question became, how many people were we going to lose here?” 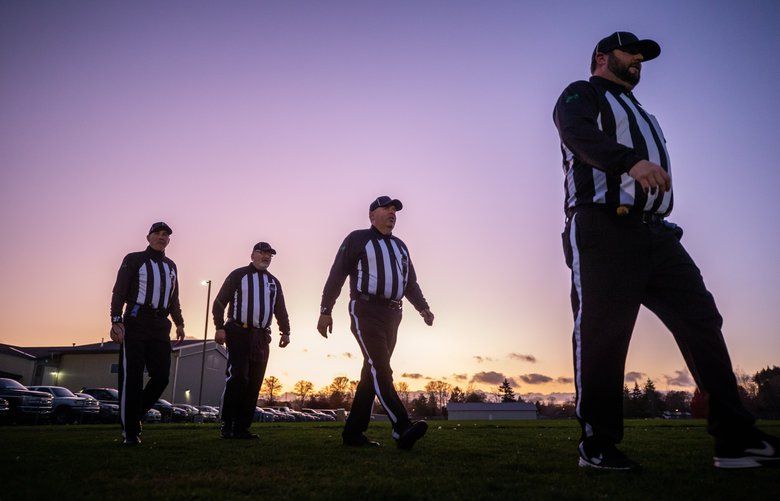 Washington’s sports officials are disappearing at an alarming rate. Here’s why.

The realization that most fall regular seasons would either be completed or nearly completed by Oct. 18 tamped down the uncertainty, reducing the number of officials required in most sports as the season heads into the postseason.

Football is the exception, with its regular season pushing through to the end of the month. For all playoffs, the WOA and the Washington Interscholastic Activities Association understand there may need to be some alterations made, but all agree all games and matches should get played.

“We may be playing on more nontraditional days,” WIAA executive director Mick Hoffman said. “Wednesday traditionally has been reserved as a family day. But we might have to use those days. Or we might have to stack two soccer matches at a neutral site where none of the four teams are from, and have officials do the doubleheader. We have to be more efficient.”

Exactly what may happen once the postseason WIAA events begin in just a couple of weeks can’t yet be known due to the uncertainty over the percentage of registered officials’ vaccination status.

Initial concern that as many as 50% of officials may not be vaccinated or willing to get vaccinated seems to be an overestimation.

“We’re starting to see numbers and already 50% plus of our officials appear to be vaccinated or are willing to get vaccinated,” Hoffman said. “In a lot of areas, it’s even higher. It’s better than we expected, which shouldn’t be totally surprising. Our officials don’t do this to make a living. They do it to support kids.”

Hoffman said that support is critical, and not only from officials. He wants parents, coaches and everyone to remember back to the beginning of the COVID-19 pandemic and to the willingness to do whatever it took to allow kids to play.

“We’ve got to take personal politics out of it and reflect back to a year ago,” Hoffman said. “Everybody said, ‘Let them play.’ Whether it’s masking or vaccination, we’ll do it.”

The WOA cautioned that the mandates could have even more impact on winter sports such as basketball and wrestling. The percentage of officials returning in those sports is down significantly more than the overall numbers.

Registrations from the WOA show basketball officials down 49% and wrestling at 61%, Hoffman and Stordahl said.

“Those are the real challenge,” Hoffman said.

“Basketball and wrestling are the real concern,” Stordahl reiterated. “It’s sort of smoke and mirrors right now. And that’s where we have to get creative.”

Stordahl related the pilot program from one assignor in Snohomish County, who informed that region that there would not be enough officials to service middle-school games. To alleviate the problem — and to jump-start potential recruiting among younger individuals — the assignor made a proposal to the high schools.

If each high school could find two students who would be interested in officiating, the association would train and equip them so that those students could officiate their feeder schools’ basketball games.

The students would get some cash in their pockets, and the officials association would get potential new referees. Stordahl said that as of the first week in October, 44 high-school students had expressed interest.

“That doesn’t mean we will get 44 new officials,” Stordahl said. “But he’s sort of doing this as a pilot program. The key thing — we’ll figure out a way to limp across the finish line and be stronger for next year.”