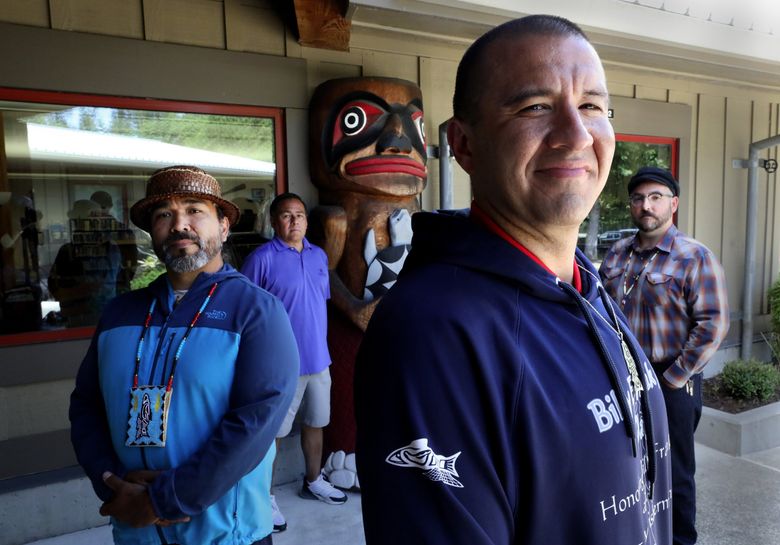 Hanford McCloud, left, Bill Kallappa, Willie Frank III and Jerad Koepp at the Wa-He-Lut Indian School at Frank’s Landing. All are happy to see changes made in school mascots, unless those mascots are done with tribe’s and nation’s cooperation and approval. (Alan Berner / The Seattle Times)

Even through a videoconference call, Bill Kallappa’s frustration was palpable.

In the wake of the Washington NFL team’s recent name change — after pressure by sponsors, political leaders and fans to drop the offensive Native American nickname and imagery from its branding — there’s still debate about whether the same action should be taken by high schools in Washington that have Native-themed mascots.

“I have to say this out loud and publicly: It’s shameful for us to still be having this discussion,” Kallappa told his Washington State Board of Education peers during a July 8 virtual meeting.

Kallappa, a member of the Makah Tribe in Neah Bay, was appointed to the board by Gov. Jay Inslee and is part of a subcommittee that plans to craft a resolution to permanently ban Native mascots and imagery in the state’s schools.

The State Board of Education made similar calls in 1993 and in 2012 that persuaded some schools to make a change. Yet approximately 35 high schools in the state have clung to their Native-themed mascots. At last count in July, there were a total of 1,963 elementary, secondary and high schools with Native-themed mascots in the U.S., according to a database maintained by the National Congress of American Indians (NCAI).

A shift in public perception tied to the Black Lives Matter movement and protests over the May killing of George Floyd, a Black man, by a white police officer, could be the push to eliminate the names and imagery that are offensive to Indigenous people. Edmonton’s Canadian Football League team is changing its Eskimos nickname while Major League Baseball’s Cleveland Indians are reviewing theirs.

It’s shameful for us to still be having this discussion.

The civil unrest has already prompted the Lake Washington School District to drop “Rebels” as Juanita High School’s mascot. In the 1980s, the moniker became a nod to the Confederate with the “stars and bars” added to the school logo. Protesters toppled a monument dedicated to Confederate soldiers at Capitol Hill’s Lake View Cemetery. But a representative said it will be replaced.

“All of this stuff is long overdue,” Kallappa said in a phone interview. “The beauty of the Black Lives Matter movement is it’s a gas pedal now. It’s an accelerator for us people of color. There’s been two levers in front of us — the gas pedal and the brake pedal — as a person of color, I’m tired of the brakes being put on by someone else.”

The change could be swift.

Unlike most states, Washington’s school district boards and superintendents have the power to change one of their schools’ mascots. Within a meeting, the South Bend High “Indians” or Kalama High “Chinooks” could become the Bears or Cougars.

Local-level governing is why the State Board of Education’s resolutions previously brought only incremental change. In 2012, the Oregon Board of Education ordered all schools with Native American mascots to change them or lose funding, with exemptions being made if granted permission by one of the state’s nine tribes.

The Washington Interscholastic Activities Association said its structure doesn’t give it authority to direct schools to change their team names or mascots. So, the WIAA can’t ban use of the monikers and logos during postseason play like the NCAA, which started doing so in 2005. The NCAA’s stance was amended to allow the branding if given approval by an American Indian tribe.

A number of high schools with offensive mascots told The Seattle Times they are reviewing names and imagery. Wellpinit High, which is located on the Spokane Indian Reservation, is a predominantly Native student body that proudly wears the Redskins name.

Columbia River High, a predominantly white school of approximately 1,200 students, voted last year to retain its “Chieftains” nickname and mascot. But the Vancouver Public Schools Board of Directors is expected to re-evaluate the issue in August as part of its equity initiative.

Colville High (Indians) and Moses Lake High (Chiefs) said they received permission from area tribes, the latter honoring the former leader of the Columbia Sinkiuse who gave his name to the town in the 1800s. The Confederated Tribes of the Colville didn’t respond to requests to verify either school’s claim.

The Seattle Public Schools Board banned Native American and Alaskan Native mascots and symbols for schools in 2002, forcing West Seattle to drop “Indians” and become the Wildcats. But Concie Pedroza, who is SPS Chief of Student Supports, noted now is perfect timing for changes because most districts are beginning the 2020-21 school year with remote learning. Pedroza would like schools to make sure they’re culturally aware.

“We’re working on a protocol to guide teachers and staff,” Pedroza said. “The kids won’t be there to be distracted. (We) can refresh and review all of our spaces to make sure there’s no references to any racist logos, posters or anything misogynistic.”

The private Catholic school in Seattle was founded in 1954 and bears the surname of Augustin-Magloire Blanchet, a French Canadian cleric who was among the early leaders of the Nisqually diocese in 1850. The school’s early mascot was a caricature of a Native man wearing a headdress and students mimicked chants during sporting events.

In the 1990s, Blanchet underwent a two-year review of its “Braves” mascot and moniker and in 1992 opted to keep the name, but phase out the imagery. The school has a green block “B” as its logo, holds an annual Native American week and views “Braves” more as an adjective in its motto of “Be True, Be Kind, Be Brave.”

But DeSapio, who started receiving calls and emails calling for change after Washington’s NFL team changed its name, agreed those adjustments don’t change the origin of the nickname.

“I don’t want to miss the opportunity for us to stop and reflect from a leadership perspective,” DeSapio said. “I’m proud of the students critically thinking about social issues and wanting to engage in them. With COVID, I haven’t had the chance to discuss this much with our leadership team or the community in general, but I do expect to discuss this next year. … There’s the whole history, and I understand it’s a tough issue.”

Being a “warrior” or “brave” is tied to protecting the community, not just battle. Native children have the opportunity to learn about their culture through three-week journeys, paddling in cedar canoes along the Washington and British Columbia coast, learning about those traditions.

“Now that our younger generation knows and appreciates what it takes to earn distinct names and then they hear other people use it so casually and in a way that is not at all representative of how one earns an eagle feather or is a warrior and brave, to that generation, it’s offensive as well,” said Fawn Sharp, who is president of the NCAI and of the Quinault Indian Nation on the Olympic peninsula.

“Now’s the time to come together strategically and seize this moment for our generation to emerge stronger.”

The death threats have stopped, and Andrew Sheldon isn’t sneered at while grocery shopping. But occasionally he’ll spot a T-shirt that reminds him of the change he helped accomplish in 2013 when the Port Townsend School Board unanimously decided to drop its offensive mascot name and symbol after 87 years.

“Once a Redskin, always a Redskin” the shirts read. Port Townsend High is now the Redhawks.

“I’d see them and go, ‘Yeah, once a racist, always a racist,’ ” Sheldon said in a phone interview. “Most of the people that were in my face, we’re on friendly terms again. It kind of healed because people, after it was gone, realized how ridiculous they kind of acted over the thing.”

Sheldon, an artist with East Coast roots, heard the same justifications used to defend the NFL Washington team’s former nickname or defense of the Confederate flag — citing permission from local tribes and stating that defending both was upholding “tradition” or “heritage.”

As the father of two daughters, Sheldon wrote to the School Board stating he didn’t want them wearing the name on their softball and basketball jerseys, knowing Native Americans across the nation were campaigning to eliminate all Native-themed names.

The NCAI has spent 52 years calling the use of Native-themed mascots, names and imagery offensive. The National Education Association (1992), United Methodist Church (1996), NAACP (1999), and United States Commission on Civil Rights (2001) are among the numerous organizations to pass resolutions in support of banning the names and imagery.

And in 2005, the American Psychological Association recommended the “immediate retirement” of the monikers based on scientific findings that the symbols cause harm to Native children and perpetuate stereotypes that dehumanize Native people. A 2020 journal article summarizing research on the psychosocial effects of Native mascots reaffirmed past findings.

Sheldon said the only negative to the experience is that the name was dropped without explanation. For Willie Frank III, a Nisqually Tribal Council member, it was a missed teachable moment.

For instance, news clippings obtained by NCAI show the r-word is actually a reference to the skin bounty hunters would cut from the body of Native Americans in order to collect payment for the killing.

“We have multigenerational trauma,” Sharp said. “Until this country does come to terms with it and begin to reconcile and heal, it’s going to be there and exist.”

The state Legislature passed the “Since Time Immemorial: Tribal Sovereignty” curriculum in 2015, under which it’s required to learn about Washington’s 29 federally recognized tribes. Another step if La Conner High (Braves) or Cheney High (Blackhawks) keeps their mascots to honor Native people, is learning about the specific tribe, according to Frank.

“There should be a section in the curriculum where they’re teaching the kids why this is named after Kamiakin or Moses,” Frank said in a phone interview. “The way things are going with our Native people and our schools is I don’t want it to be just a check the box. If you’re going to use a tribal name, there needs to be some history to teach the kids and the folks in the area.”

The North Thurston Public School District is an example of that vision. Frank was the first person Michael Smith, assistant principal at River Ridge High, contacted to devise a plan to not only create equity for Native students but also raise cultural awareness.

Multiple people were involved in a three-year process in which the changes included the NTPS Board of Directors initiating a Land Acknowledgment beginning in November 2019. Now before meetings and events in the district, a statement is read to recognize the Indigenous inhabitants of the land.

The Board also moved to fly the Nisqually Tribe flag at each of its 22 schools.

For now, Frank and Kallappa said many in their community just want the offensive nicknames removed.

“If schools aren’t willing to do that on their own, I wouldn’t be surprised to see some sort of legislation drafted around banning those names and making it state law versus a small community decision,” Kallappa said. “That’s what’s going to have to happen for there to be the sort of change we’re talking about.”