Skip to content
By
Doug Drowley
Special to the Seattle Times

Across the state this past week, teams and individuals have been competing in state championship events. From track and field to tennis, baseball to softball and soccer to golf, Washington high-school athletes are participating in the athletic culmination of the school year.

For the seniors, this past week — and month, for that matter — the opportunity has taken on even more significance. For many of them, this spring has become their only chance to compete in a Washington Interscholastic Activities Association state playoff atmosphere.

That is because it has been since 2019 that any spring state playoffs have been contested.

The COVID-19 pandemic shut down the world just as spring athletes were set to start their seasons in March 2020. This year’s seniors were only sophomores when that took place, and it has taken two full seasons to get back to regular schedules. 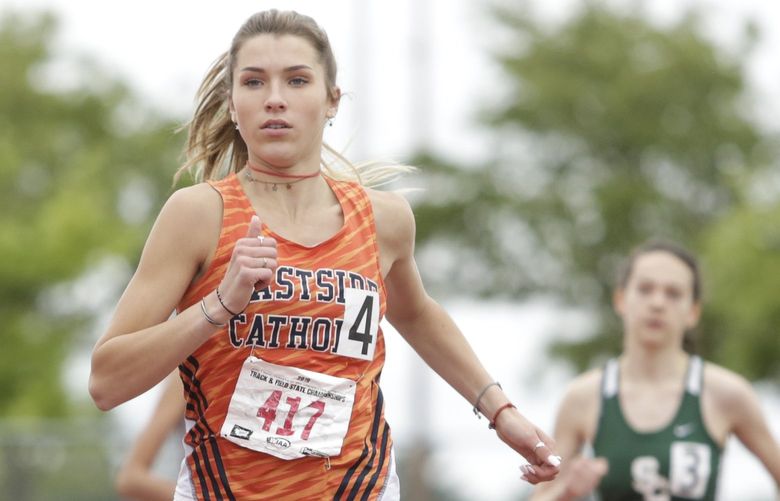 The 2021 campaign offered no playoffs beyond league play for any season, relegating these seniors’ aspirations to league championships as the pinnacle of their junior years.

For squads such as the Bainbridge baseball team or Jackson softball team, the cancellations felt like they hurt even more.

“That 2020 team was absurd,” Bainbridge senior J.R. Ritchie said. “I’m pretty sure our entire team ended up going to college for baseball. We had five or six guys throwing 90-plus. It was just stupid. Last year, too. We had five guys who threw 90 and our sixth threw 88.”

Those teams grew up playing baseball together, much like this year’s version of the Spartans. But the pandemic erased the chance for either of those pitching-heavy teams to even make a run at the Class 3A playoffs.

It left 2022. The Ritchie-led group had only a single opportunity in his final high-school year before he either heads to Westwood to play with the UCLA Bruins or signs a professional contract with whomever drafts him in July in the Major League Baseball First-Year Player Draft.

During the district tournament, Ritchie discussed preparations that would have to happen for that draft. Those are underway for the touted pitcher and shortstop as Bainbridge concluded its playoff run with a loss at the regionals to Mercer Island.

While the pandemic’s impact mostly has decreased for high-school athletics, COVID had one last obstacle for the Spartans. Ritchie, coach Geoff Brown and the Spartans discovered the day before that regional game that Ritchie had contracted the virus and would be unable to play.

Bainbridge fans and parents at least got to see this team in the postseason.

“I love watching him play,” said Ritchie’s mom, Torie. “The last couple of years, we’ve had to travel just to see him.”

The remnants of COVID didn’t end every team’s storybook run this spring. But in an already magical athletic year, the Auburn Trojans baseball team came up a game short last Saturday, thanks to a big effort from No. 12 seed Mercer Island.

The Trojans reversed what they felt was an underperforming effort from a year ago, when a talented group finished in the middle of the North Puget Sound League pack by sweeping through the 3A/4A combined league and district to get into their state regional.

“You still want to give it your all, but it’s hard to do that when you don’t have anything to play for — no state title to go for,” said Auburn senior Colton Anardi, referring to his junior year.

Farther north, the pandemic shutdown had the Timberwolves also wondering what might have been. While Bainbridge baseball thought its breakthrough was imminent, the Jackson softball team was in position to extend two years of success.

The Timberwolves won Class 4A state titles in 2018 and 2019. Three years later, Jackson is the second seed to the state tournament, which began Friday in Spokane.

Instead of a run for a third consecutive title, it could have been a chance for a five-peat had things fallen correctly for the group from Mill Creek. Already this season, things hit a small snag when Jackson lost a game at districts.

Combined with Kentwood’s dominating run through the West Central/Southwest bi-district tournament, culminated by sophomore pitcher Sarah Wright’s 18-strikeout, no-hitter to beat Skyview for the title, it catapulted the Conquerors to the top seed at state this weekend.

“Our freshman year, we made it to districts but not to state,” Kentwood senior shortstop Gracie Musga said. “I definitely thought the next year we were going to make it to state. We were really excited, and then just before our first league game it shut down. I was a little heart broken.”

Three years have passed, which simply has stoked the fire.

“You’ve had such a big gap of wanting something,” Musga said. “And now that I have the chance, we’re going to go after it and get it. It’s the mindset of ‘leave it all on the field.’ There’s nothing to lose.”

Losing is not something Foster senior Lyricc Lopez can say he’s familiar with this spring. The Bulldog senior found the three-year, two-season gap to be a positive development for his aspirations on the track.

“Going into my freshman year, I was kind of doing it for fun,” Lopez said.

When he and everyone else got shut down in 2020, Lopez implemented a program to develop his skills in one of the more difficult races going — the 300-meter intermediate hurdles. He found hurdling coach Peller Phillips, younger brother of Mark Phillips.

The older Phillips held the Washington record in the 300 hurdles, 36.57 seconds, that had stood since Star Track at Lincoln Bowl in Tacoma in 1986. By the time this spring began, with a full season ahead, Lopez had that record in his sights.

In the first week of the postseason, two weeks ago at the KingCo Conference championships, Lopez reached that goal. His 36.26 seconds is the fifth-fastest time in the country this spring, and he now is the state-record holder.

“I totally look at it as something good,” Lopez said of the pandemic. “It helped me figure out what events I wanted to do. I figured out that I just wanted to be the fastest out there, the fastest in the state.”

With the record behind him, Lopez has reset his goals going into the state meet that began Thursday afternoon at Mount Tahoma High in Tacoma. In addition to the hurdles, Lopez has the best time in the state this year in the 400 meters (46.65), as well as the third best times in the 100 and 200 meters.

In both of the shorter sprints, Lopez trails a guy he’ll see at state — Sehome’s Jacob Andrews, who owns the top times in both events at 10.55 and 21.24 seconds. After a long break between state meets, the two finally will get to meet for a title, and Lopez can’t wait for the chance.

“I think this is where I’m supposed to be right now,” Lopez concluded.