More isn’t what Meghan Fiso planned to contribute when she transferred to Garfield.

At West Seattle the previous three seasons of her high-school basketball career, the wing player was part of lineups that featured at least three NCAA Division I commits. A bad night didn’t stop the Wildcats from being a threat in Metro League games or winning back-to-back Class 3A SeaKing District tournament titles (2018 and 2017) and placing third at the state tournament in 2018.

Although, bad nights were rare.

When Fiso’s family moved across Elliott Bay and she transferred for her senior season, more is what was needed. By December, much of a formidable Bulldogs lineup seemingly destined to win state was sidelined due to injuries. That included Dalayah Daniels, a McDonald’s All-American and California commit. 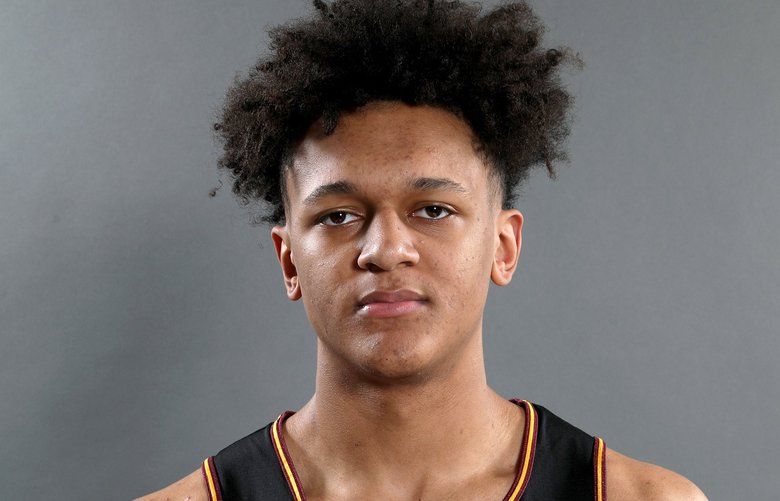 “It was hard to see it,” Fiso said. “Everyone wants to play and most of the players who were hurt were seniors and they were missing out on some games. But I knew what I had to do in order for us to keep winning. I just had to assume everyone else’s role.”

As the only expected starter remaining, Fiso led Garfield to runner-up finishes in the Metro League and SeaKing District tournaments. The Michigan-bound leader averaged 24.7 points, 9 rebounds, 5 assists and 4 steals per game for the Bulldogs.

For her performance Fiso is The Seattle Times pick for girls basketball player of the year.

“I’m really proud of Meghan,” Daniels said. “She does it all.”

Garfield’s starting point guard, senior Cari Davis, suffered an ACL injury last summer. The Bulldogs’ shooting guard, senior Kareyna Taylor, missed most of the season with a hyperextended knee and starting senior forward Kamia Crudup broke her thumb. Daniels was limited to seven regular-season games after suffering an ankle injury at a tournament in Phoenix during the winter break.

The starters trickled back for the start of Garfield’s postseason play in mid-February. And getting them to mesh quickly required more leadership from Fiso. But as the fourth of six children, Fiso has experience in teamwork.

“I’m the oldest sibling in the house right now,” said Fiso, whose younger sister Katie will play basketball for Garfield next year. “My mom and dad always push me to pave the way for my younger siblings. Like every morning, I have to force my sister to wake up with me and go to the gym and help her be better.”

The Bulldogs are looking to return to the state championship game. Garfield placed second in 2018.

“She didn’t get that opportunity to be a leader at West Seattle or on her AAU teams,” Bulldogs coach Marvin Hall said of Fiso. “It’s not even her on the floor. It’s her talking to the players off the floor. I’ve seen that growth in her and that’s the joy I get out of coaching — watching Meghan become this person she can take on to college.”

The two-time MVP of the NPSL Olympic Division helped Beamer win the league title by averaging 17 points, 7.2 rebounds and 3 assists per game. Alexander is an Eastern Washington commit.

Height didn’t stop Erling from being one of the top post players in WesCo 4A. She averaged 13 points, 5 rebounds and 3 assists per game in helping the Grizzlies defend their league title.

The Arizona State commit averaged 19.8 points and 14.9 rebounds per game for the Wolves. Burton-Oliver was named to the all-KingCo 4A first team and was a team captain.

The Boise State commit led her team by averaging 19.1 points, 5 rebounds and 3 assists per game. Reed set a school record by hitting eight three-pointers in a game this season.

In his 14th season, Bullock guided the Falcons to their fourth consecutive and seventh overall KingCo 4A championship. He has a 237-83 record at Woodinville.