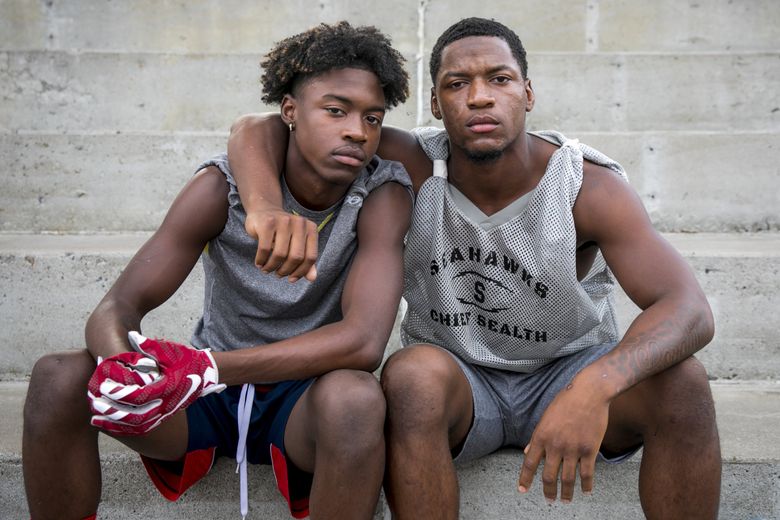 Dontae, right, and Jalanie McMillan are hoping to continue their football careers in college. (Bettina Hansen / The Seattle Times)

Their mother's alleged drug use and father's time behind bars could have set them back permanently. But an intervention from their grandmother set Dontae and Jalanie McMillan on the right path. And that path could continue with a college football scholarship.

You’re not supposed to know about Dontae McMillan.

Complications at birth because of his mother’s alleged drug use shortened his and twin Jalanie’s life expectancy. As children, neither were expected to overcome multiple learning disabilities to even advance to high school. And playing football for Chief Sealth — a program that’s never reached the state tournament — isn’t where scouts normally look for college prospects.

No, the layers of obstacles and number of pitfalls the size of craters should have buried the twins. Yet, just as on the football field, they find a sliver of light and break free.

Dontae, the more recruited of the pair, is a chiseled, 5-foot-11, 185-pound senior and natural playmaker who has played both sides of the ball since his freshman season. He’s rushed for 1,104 yards on 135 carries, scoring 15 touchdowns and accounting for two interceptions and two fumble recoveries on defense.

Jalanie, who’s 5-10, 140 pounds, is a skilled cornerback and receiver with speed and agility. He has three touchdown receptions this season.

“I’ve been through the worst in my life,” Dontae said. “It makes me mad. At the same time, I have to keep moving forward. I can’t let anything stop me from being successful. … I’m proud of myself for that.”

Vera Jimerson, the McMillans’ paternal grandmother, raised the twins in a corner townhouse facing a park that has a view of downtown Seattle. There, “Trouble” is a plump miniature pinscher-Chihuahua who guards the front door with ferocity.

“It’s a quiet, peaceful place to grow up,” Dontae said of the tree-lined street.

The High Point/South Delridge neighborhood in West Seattle has the sixth-highest crime rate in the city, according to data analyzed by The Seattle Times. And it has increased by 56 percent in the past decade.

The twins’ parents are part of the statistics. Both were imprisoned for felony assault and possession of controlled substances. Their mother, who has multiple aliases, pleaded guilty to knowingly trafficking stolen property in 2005.

Since the twins’ birth in 2001, Jimerson visited their Seattle home thrice weekly and kept the newborns on weekends. Those sleepovers often extended days and sometimes months as their mother disappeared, Jimerson suspects because of drug use. Her son was sent to prison a month before the boys — her first grandchildren — were born.

Jimerson legally adopted the boys when they were 8 years old to protect them.

“I wanted my son to be a man and raise his children,” said Jimerson of the oldest of her three boys. “After eight years and he didn’t step up, I decided to live our life. And to be perfectly honest, they made me a better person.”

Jimerson was 22 when she married her first husband, who died seven years later of pancreatic cancer. Alone with two children in Oregon, Jimerson was forced to learn the basics such as how to pay a utility bill and admits to not being nurturing because of selfishness.

She describes the decision to adopt her grandchildren as a “second chance.” Walks in the park, trips to the beach, exploring Seattle Center and fixed dinner times filled Dontae and Jalanie’s upbringing.

“My grandmother, she came and got me and my brother out of the struggle, and I love and bless her for that,” said Dontae, who has five other siblings. “She taught us how to follow our dreams. If it wasn’t for my grandmother, we wouldn’t be here. We’d be bums or gang members. I’m so glad we’re not in that position”

Jimerson couldn’t stop birthdays from being painful. Their mother has never celebrated with her sons, and their father wasn’t released until their 13th birthday.

“It’s really sad and aggravating to know what they could’ve done and didn’t,” Jalanie said. “The truth hurts.”

The darkest moment was their freshman year, in March 2016, when their mom, according to police, killed her boyfriend while pregnant with their sister.

Dontae received a call from his mother during school, a frantic voice detailing what happened. She wasn’t charged with a crime, but the boys still had to navigate the harassment on social media and resist the urge to fight.

“I didn’t understand why a lot of people didn’t like us because of what my mom did to him,” Dontae said. “He made the decision to put his hands on my mom.”

Jalanie said they channeled the anger into preparing for their sophomore football season.

At age 6, their father, despite being incarcerated, signed them up to play through the SWAC Cougars youth program despite their grandmother wanting the boys to play tennis. The twins had basketball dreams.

The rule with any activity in the Jimerson-McMillan household was the boys couldn’t quit until the season or lesson was complete. Difficult with tennis but not football.

“I was kind of upset about it because I didn’t want them to get hurt,” Jimerson said. “I’m granny, so I’m a little overprotective, and it is a rough sport. But when they started it, they were actually really good. It just clicked for them. Not only playing, but the socialization of it — meeting new people and committing to something. It was everything for us. It changed our lives.”

It gave the boys purpose in the classroom, too. In elementary school, the twins were in special-education classes and had behavioral issues, partly from trauma as toddlers. Dontae said he didn’t want to be excluded from mainstream courses in high school, so he worked with teachers on ways to improve his learning and speech impediments.

Dontae boasts that he completes homework before practice and would like to major in communications to become a sports broadcaster if playing in the NFL doesn’t happen.

“He and his brother are grounded,” longtime Chief Sealth coach Ted Rodriguez said. “The No. 1 thing for our staff is trust and love. If you make a mistake in the community or school, let’s talk about it. We tell them we love them all the time.

“Donnie has high expectations and dreams, and I hope he reaches all of them. He’s a special kid, but the next level is hard. We’re here to support that part. Yeah, let’s get them to college football, but what happens after that? What program is going to take care of him and see that he graduates and gets something out of his college career and not just football? We’re about the long term.”

Jimerson is living for graduation day. She was diagnosed in March with colon cancer and underwent surgery to remove the tumors. She started another round of chemotherapy earlier this month.

She’s adamant about the twins getting high-school and college diplomas — both would be a first for the paternal side of their family.

“Dontae doesn’t handle any illness with me at all very well,” Jimerson said. “He gets so depressed. And I get really upset because I need to make sure they’re OK in life. All I want for them is to be educated so they can have a good life. Nobody can take that education and knowledge from you once you have it.”

Neighborhood pride isn’t hard to understand. When it comes to Metro League sports, however, it is surprising that Dontae played four years of football at Chief Sealth — a public school five minutes from his home. The Seahawks won a combined four games during McMillan’s freshmen and sophomore seasons.

Seattle Public Schools has open enrollment where students can apply to attend any high school in the city. It’s against Washington Interscholastic Activities Association rules to transfer for athletic reasons, but athletes change jerseys quicker than fashion trends in the Metro League.

A player of McMillan’s skill on a losing team is expected to be poached. And, according his coaches and grandmother, Garfield, O’Dea, Rainier Beach and Eastside Catholic were among programs that tried.

McMillan declines to discuss the claims beyond saying he never considered leaving.

“I know the pressures he was getting,” said Sealth assistant coach Reginal Rushin, who’s a close family friend. “They were coming from all kinds of places just to get him to transfer. I told Donnie something last year, and I think it stuck with him. I said, ‘Listen, once we put these stats up, you don’t have to go nowhere. They will come to you. These stats are the ticket.’ ”

With a senior-laden line, McMillan rushed for 1,586 yards on 187 carries, scoring 17 touchdowns his junior year. He also had two touchdown receptions, two sacks and an interception, earning co-Metro League Valley Division offensive MVP honors. All while carrying a 3.4 GPA.

Oregon offered him a scholarship in February.

Dontae upped his offseason workouts to garner more attention from colleges. He went to Puyallup an average of twice a week to train with Heir Sports and traveled with the organization’s 7-on-7 teams to be looked at by scouts.

By September, online recruiting site 247Sports had McMillan listed as a three-star recruit ranked 10th in the state for the Class of 2019. Sacramento State, Utah State and Northern Colorado followed Oregon in offering him a scholarship.

Jalanie, who had a 3.8 GPA as a junior, is also hoping to play in college. He’s still waiting for his first offer.

McMillan opened his senior season with a 42-yard touchdown run against then-ranked Kennedy Catholic. Most will remember Lancers quarterback Sam Huard throwing for 557 yards and tying a state record with 10 touchdown  passes.

“He’s one of the best running backs in the state,” Cross said. “Our guys played really well in the first half; it was a tidal wave of execution. But Dontae? He’s really, really good.”

McMillan’s grandmother shouts the same with her megaphone in the stands, boasting about players on both teams. But no one debates McMillan’s talent.

He made people know his name. He belongs on the football field, breaking tackles and scoring touchdowns with a smile.

“I’m so proud,” Jimerson said through tears. “He’s a survivor.”