Kate Jendrezak had prepared for something big.

Like the thousands of high-school athletes across the state, the Eastside Catholic senior had things she hoped to accomplish.

“I wanted to have four titles in the 800,” said Jendrezak, who will be part of the track and field team at UCLA. “This season was for me. I’ve been training since July for this one season.”

This season increasingly seems lost, however.

With schools closed until at least late April by order of Gov. Jay Inslee, and athletics on hold thanks to concerns over coronavirus exposure, this spring has become a waiting game. The Washington Interscholastic Activities Association has said a postseason still could happen in May — if schools return by April 27. 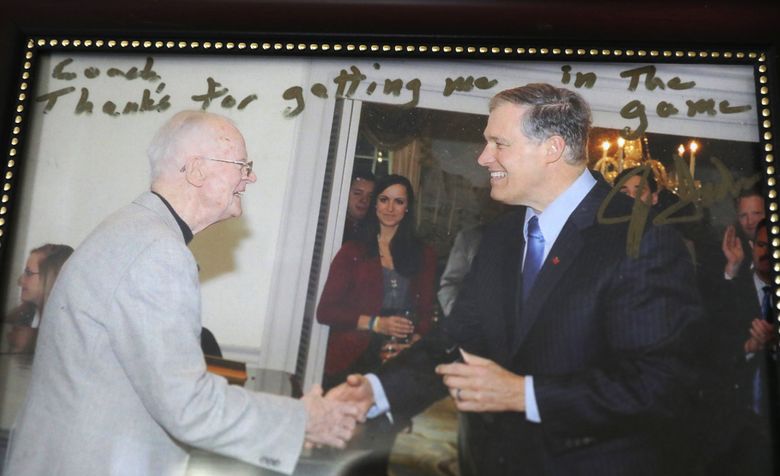 Gov. Inslee uses 100-year-old former basketball coach at Ingraham as example of need to stay inside

But Jendrezak, like so many other seniors, still holds out hope that she can go after her final dreams. Other than a fourth 800 state title, Jendrezak has other items on the board.

The 800 mark of 2:08.31 set by Glacier Peak’s Amy-Eloise Neale that same year also could have been, or might be, within reach.

“I feel so much faster this year,” said Jendrezak, who still runs her own practice every day at 1:30 p.m. “Last year was a bridge year. I changed coaches. Now I am all speed and power. My body has adjusted to it. I think the 800 would have been something special.”

Jenn Cummings has similar state-title aspirations for her entire Redmond softball team. Like Jendrezak, Cummings will get to play again even if she and the Mustangs lose this entire season as the catcher has signed to play for the Washington Huskies next season.

But Cummings believes this year’s Redmond team has the pieces to repeat what it did when she and three of her senior teammates were freshmen — win a state title.

“One hundred percent I was thinking about that,” Cummings said. “We have a lot of young talent. We have four seniors this year. All four were starters as freshmen. I’m really hoping they will make something of a season.”

If not, Cummings and fellow seniors Audrey Walker (Northern Idaho) and Kaia Bradford (Hawaii) still have games ahead. Fellow senior Camille Eaton might not.

“You have to think about it,” Cummings said. “Those that might never get to put on the cleats again, compete again.”

For Ingraham pitcher Reilly McAdams, this year had more meaning. An arm injury he suffered early in the summer cost him most of his club season. With no games so far this spring in high school, it’s been almost a year since McAdams — also a UW commit — has played a game.

“This is not the end of baseball for me,” McAdams said. “But for those that maybe it’s their last year?”

And he was elected a captain for this Ingraham squad.

“As a freshman, you’re always waiting to be a senior,” McAdams said. “To be at the top of the totem pole. Having it all stripped away, it hurts.”

“Putting in the work for the past four years, and the work before that. You feel like it’s your turn to step up. I was elected a captain this year. I really wanted to give back to my school, my teammates. Wear the uniform with pride.”

Ballard pitcher Kelan Scanlan will don the colors for the University of Portland next season. But he knows that will be different.

“I’ve thought of a lot of the guys I’ve played with all of our lives,” Scanlan said.

“I think it’s worse for those seniors that haven’t signed with a college,” Tahoma’s Alaina Brady said. “And those juniors trying to get recruited.”

Brady knows she will get to run again. She signed to compete as a heptathlete at Notre Dame next season.

“I’m personally OK,” Brady said. “This is not as stressful for me.”

As disappointed as all of the spring-sports athletes are about the loss of the regular season, and the ever-growing likelihood that even the postseason will be lost, most accept the reason it’s happening.

“I find a little consolation in that it’s not something we did,” Cummings said. “And I really feel for the college athletes (who have seen their seasons canceled). I can’t even imagine.”

“It’s finally kicked in that we probably won’t get another game,” McAdams said.

There are bigger concerns, these athletes realize.

“It’s unfortunate if it happens, yes,” Scanlan said. “But look at the bigger picture. People are getting sick. People are dying. This is a big deal. A lot of us will feel really sad and frustrated at the end of the day. But if it gets to that point, there is more to it than spring sports.”