The seeds of a championship, the first of what the Garfield Bulldogs believe will be several to come over the next few weeks, may have been sown last June.

At that time, Garfield coach JayDon Nickens looked around the gym and saw a team filled with talent — with one piece not there. Koren Johnson was exploring his options at a prep school as Garfield put in its summer work in preparation for the 2020-21 season.

So when Johnson, the UW commit and the Garfield floor leader fouled out of the Metro League boys basketball championship game with 3.7 seconds left in the third quarter on Friday, Garfield knew it could respond.

And the Bulldogs (18-0) did just that, erasing an eight-point deficit after three quarters and pulling out a 67-60 victory over Seattle Prep (17-5) at Royal Brougham Pavilion on the campus of Seattle Pacific University. 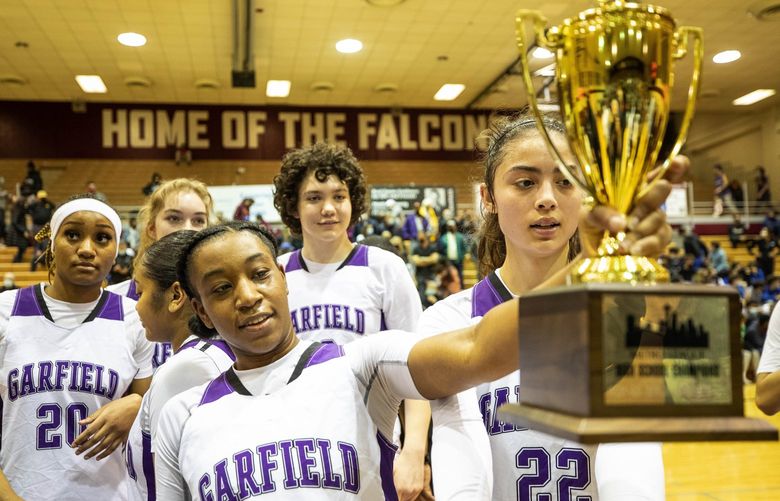 “This is huge,” Garfield forward Sherrell McCullum said. “This is my first one. It’s my first taste of the playoffs. It’s just next man up. We all had to do our job.”

Garfield sets its sights on the SeaKing District title before regionals and defending its 2020 state crown the first week of March in the Tacoma Dome.

The Panthers seized control of the contest with a 12-4 run over the final 4 minutes, 33 seconds of the second quarter that helped Seattle Prep pull away from a 20-20 tie. The eight-point deficit for Garfield was only the third time all season that the Bulldogs had trailed at halftime, and the first since the championship game of the Hardwood Invite at Auburn on Dec. 21.

In that one, the host Trojans led 20-18 after the first 16 minutes. But Garfield erupted for 24 points in the third quarter to erase that small deficit and go on to the victory.

Nobody had challenged the top-ranked Bulldogs after that as they moved through the regular-season Metro schedule and into the league tournament — until Friday night.

Seattle Prep didn’t relinquish its advantage in the third quarter. McCollum made two free throws to trim the lead to six 45-39 with 1:52 left in the quarter before a strange sequence transpired that put Johnson on the bench for the remainder of the game.

The senior point guard, who was held to just seven points in the game, picked up his third personal with 59 seconds left in the quarter, leading to two Tyler Mrus free throws and a 47-39 Seattle Prep lead. Two possessions later, Johnson went for a strip steal and poked the ball away.

But the whistle blew and Johnson was charged with his fourth foul. Moments later, as Nickens sent a substitute into the game for his star, Johnson approached the referee to protest. Before the sub got to him, the whistle blew again.

Johnson earned a technical foul for the argument, which also counted as his fifth personal foul, and he fouled out of the game. Two ensuing free throws, again by Mrus, gave the Panthers a 49-41 lead entering the fourth quarter.

“I’ve been battling with these guys since June, when we didn’t have Koren,” Nickens said. “But with the guys I’ve got, I have 12 great players who are battling and competing every day. There’s no drop off. It’s the next man up approach. They work for me. I’m the boss, they get taken care of, so … do your job.”

The Bulldogs did just that.

Garfield opened the fourth quarter with a 7-0 run culminated by a breakaway dunk from Jaylin Stewart to close within a point, 49-48, with 6:15 to play. Stewart made a three-pointer with 4:31 left that put the Bulldogs back in front 55-53, Garfield’s first lead since McCullum’s basket made it 14-13 with 7:31 to play in the second quarter.