Skip to content
By
Matt Massey
Special to The Seattle Times

PUYALLUP — Every step along the way, players kept preaching that the Bellevue High School football team was back.

On Saturday, they left no doubt.

Sophomore defensive back Colin Miller made two interceptions as the Wolverines’ defense stiffened in the fourth quarter. Fittingly, senior running back William Wang put on the finishing touches.

Wang, using all of his 5-foot-10, 195-pound frame, pounded out 243 yards and two touchdowns on 33 carries as Bellevue collected its first official state title in eight years with a hard-fought 17-13 decision over Kennewick in the Class 3A championship game at Sparks Stadium.

Top-seeded Bellevue (14-0) made two defensive stops in the fourth quarter with the No. 6 Lions (12-2) starting drives in the Wolverines’ territory. Miller jumped in front of a Dayton Davis pass, diving for the game-clinching interception at the Wolverines’ 42-yard line with 3:28 left in the game.

“I feel like it’s a whole team, and this couldn’t be done without all the other players,” said Wang, who in typical fashion low-keyed his contributions. “It’s something else to be with the people you love and accomplish such a great goal. It feels amazing.

“I just have a job on the offense and I have to execute it. This is like the culmination off all our efforts, all of the offseason. Plus, we didn’t get to play (the postseason) last season (because of COVID).”

The Wolverines’ program was issued penalties in 2016 by the Washington Interscholastic Activities Association, stripping them of state titles in 2012 and 2013 for recruiting and rules violations. Their last title still in the record book came in 2011 and now Bellevue’s title count is at 11 (13 without sanctions). 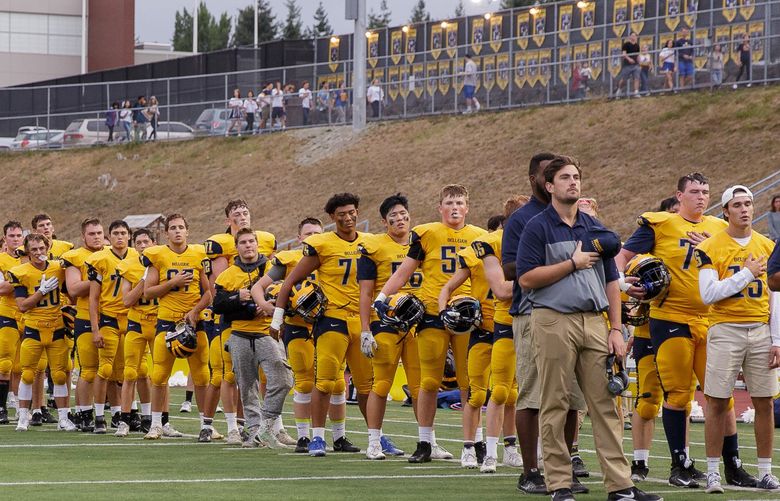 “The seniors last year didn’t get this chance, so it’s nice to bring the trophy back to Bellevue for them,” Wang said.

Wang ran through a big hole up the middle and raced 65 yards for a touchdown — his second of the day — to hike the Bellevue lead to 17-7 with four minutes left in the third quarter. Just one play before Wang’s long TD run, the Wolverines narrowly converted a fourth-and-two from their own 33-yard line on a Wang run over the left side. The big run finished off a seven-play, 89-yard scoring drive that took 3 minutes, 24 seconds.

Myles Mayovsky’s 67-yard catch-and-run on a Davis pass brought Kennewick within 17-13 with 1:56 left in the third quarter. Mayovsky reversed field and raced down the left sideline for the score after catching the short pass to the right.

“We just had to put points on the board, and we had our chances,” Kennewick coach Randy Affholter said after his team had possessions with 11:52 and 4:21 remaining in the game. “We figured this game would be a grinder. We finally flipped the field in the fourth quarter, and we had two opportunities that we didn’t take advantage of.”

“I love the seniors so much and to do that for them and we just wanted to give everything we possibly could to make sure they come home the right way,” Miller said.

There was a 22-minute delay after the ensuing kickoff after Mayovsky’s receiving TD when Joel Schneider was ultimately have been ruled to have gone out of bounds and returned to the field to touch the ball at the Bellevue’s 1-yard line with 1:56 left in the third quarter. Kennewick got the ball back after a three-and-out from Bellevue and drove to the Wolverines’ 18-yard line, but a 17-yard penalty thwarted the drive.

“This is just one of those special moments you can’t pay for,” said Bellevue coach Michael Kneip, who took over the program in 2018 after winning four state titles as a player. “We enjoy every second of it and I’m so happy for these kids. They are such good kids. We’re just the hardest-working team in the state and our seniors had everything to do with that.”