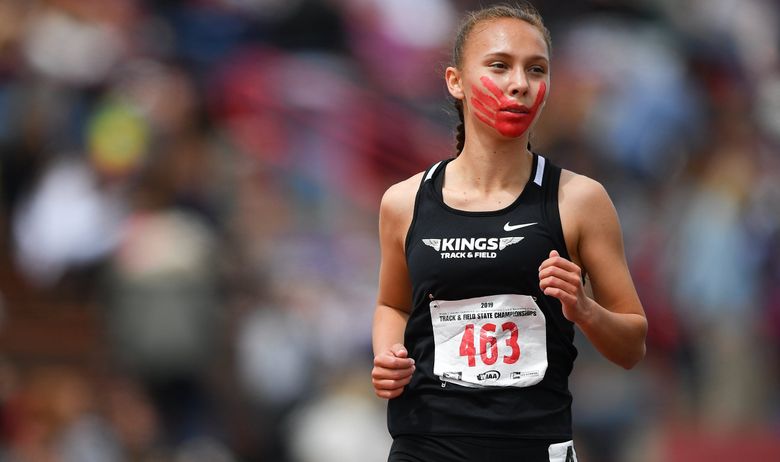 Rosalie Fish of Muckleshoot Tribal School painted her face with a hand print to raise awareness for Missing and Murdered Indigenous Women. (Tyler Tjomsland / Spokesman-Review)
By
Dave Trimmer
Special to The Seattle Times

CHENEY, Spokane County — Rosalie Fish was the most recognizable athlete at the small-school state track and field meet last weekend.

The five trips to the awards podium to receive three gold medals, a silver and a sportsmanship award helped.

But as the Muckleshoot Tribal School student circled the track 18 times over three days, she stood out for the bright red paint over her mouth and the letters MMIW on her right leg.

It’s an epidemic on reservations across America. Violence against Native American women is rampant, and according to a recent study police agencies are not adequately identifying or reporting cases when a woman is killed or reported missing.

Fish, a member of the Cowlitz Tribe, chose to run at the Class 1B state meet at Eastern Washington University to represent women from near her home in Auburn who are among the gruesome statistics. She painted a hand over her mouth to speak for those who couldn’t speak for themselves.

“This weekend was really not like anything I’ve ever done or ever felt before,” she said after her last race. “It’s the first time I ran for anyone other than myself. … This is the first time I’ve ever made a scene and not been apologetic.”

Not that she has ever made a scene or had done anything at state that needed an apology, but it was obvious she was processing a lot when she came up just short in her final high-school race.

A grand slam of golds would have been nice, but it wouldn’t have made her star shine any brighter.

No, this senior, though edged by a stride in the 400-meter final, was a champion for Misty Anne Upham, just as she was when she won the 1,600 for Alice Looney; and the 800 for Jacqueline Salyers, and the 3,200 for Renee Davis and Davis’ unborn child. All were indigenous women from Washington who met a violent end. All were honored on a poster Fish brought to the state meet.

Stories about the MMIW problem have become more frequent, and a story on missing and murdered indigenous women from the Tacoma area caught Fish’s attention. The statistics are staggering — on some reservations Native American women are 10 times more likely to be murdered than the national average, according to a report by the Department of Justice.

The evolution to running for a cause took most of a successful season.

“As a Native runner, it goes without saying you run for Native people,” Fish said. “You have to realize you represent Indian Country.”

Then she saw Jordan Marie Brings Three White Horses Daniel run the Boston Marathon for the MMIW cause. Daniel, who is Kul Wicasa Lakota and a citizen of the Lower Brule Indian Reservation in South Dakota, is an outreach and project manager at UCLA and a former NCAA Division I runner hoping to take her message to the next Olympic Trials.

“Nobody is going to listen to me. As a teenage girl nobody has to care what I say. But when I run about it, people will notice.”

Fish used social media to reach out to Daniel, asking if she could emulate her.

“I was a little bit surprised, and very honored and excited,” said Daniel, also the founder of Rising Hearts coalition, a grassroots group that draws attention to and defends indigenous community rights. “It’s great to see Native youth take a stand, make a statement for their people.”

Daniel, who said missing and murdered women are “a crisis, an epidemic across Indian Country,” responded to Fish with “Please do. The more of us that do it … we can break into a new public consciousness of it all.”

Fish’s mother, Autumn McCloud, said she didn’t know of her daughter’s intentions. But she wasn’t surprised.

“We would have been happy with however she did,” McCloud said after Fish led Muckleshoot Tribal to fourth place for the school’s first state trophy in girls sports. “I think it added a little weight. I know she doesn’t want to disappoint her community, and she wanted to make sure she honored each of those women.”

“We talked about it. I was surprised by the amount of attention it got on social media,” he said. “I don’t think she (expected that). She just wanted to have that platform.

“Her being a young person in general and an athlete in particular, I think it resonated.”

The night before state, Williams, through a friend, arranged to have legendary Oglala Lakota runner Billy Mills, the 1964 Olympic champion at 10,000 meters, talk to her.

But even though she won her first race May 23 — the 1,600 meters, by 29 seconds — she was disappointed and reached out to Daniel.

“I told her I felt heavy,” Fish said. “I wasn’t running anything like I was capable, anywhere close to my (personal records) and I didn’t know what was wrong.”

Daniel said, “I felt heavy finishing the Boston Marathon, running and praying for our sisters. … I told her it’s a big weight of responsibility, and you didn’t know how it would come out. I also stressed the families would be happy and proud of her that their loved one’s stories were being told and they were not forgotten.”

Fish also said Mills had told her that running to the best of your ability makes you a winner.

“Between those two and their words, I decided I was OK with whatever time I did, whatever place I got, because I knew I wasn’t going to hold back for the women I was representing,” she said.

On the second day of the state meet Fish cruised through qualifying for the 400 and 800.

She won the 800 by almost 10 seconds Saturday morning, then went about the process of seeing how best to display the poster she had made with the pictures of the women she was running for. Eventually she propped it on a chair outside the track across from the finish line and draped her first two gold medals on it.

Fish easily defended her 3,200 title and, after a few moments to catch her breath, handed the other finishers a cup of water. Combined with encouraging runners to stick with it as she lapped them, Fish was nominated to receive a sportsmanship medal. That, too, went on her poster.

Fish plans to run at Iowa Central Community College in Fort Dodge in the fall. Williams learned of the powerful running school a couple of years earlier and within minutes of sending an introductory email for Fish, coach Dee Brown called.

“I wasn’t sure about college. I’m not a great student,” Fish said. “I’m not excelling, I can struggle a little bit sometimes. He told me I have potential and he wants me to run. I said running is the only thing I like in school, so if I can do that in college, that might make it pretty bearable.”

No one else has suggested Fish struggles, and considering she is about to earn her pilot’s license and is taking Running Start classes at Green River College, where she is also the school’s First Nations organization president, she seems well prepared for the next step.

After her last race and the interviews that came with it, Fish was standing beside her poster, posing for pictures. Gabe Salinas-Kieffer, a member of the Spokane Tribe who had placed in the 400 for Wellpinit High School, walked by and handed his medal to add to her board as a show of support.

Asked if she knew him, Fish could only shake her head “no” as tears ran down her cheeks.

Nearby, a retired coach and a longtime running sponsor were wiping their eyes.

Correction: A previous version of this story cited actress Misty Anne Upham, who disappeared and died in 2014, by an incorrect name.