In any year, receiving a scholarship to play college football is a big feat.

But in 2022, that accomplishment seems to be much more difficult for Washington state high-school seniors, in large part because of the effects of the pandemic.

The extra year of eligibility for NCAA athletes, the lack of a fall season in their junior year and the onset of the NCAA transfer portal have meant there are fewer college scholarship opportunities for this year’s class.

Anecdotal and numerical evidence bear that out. 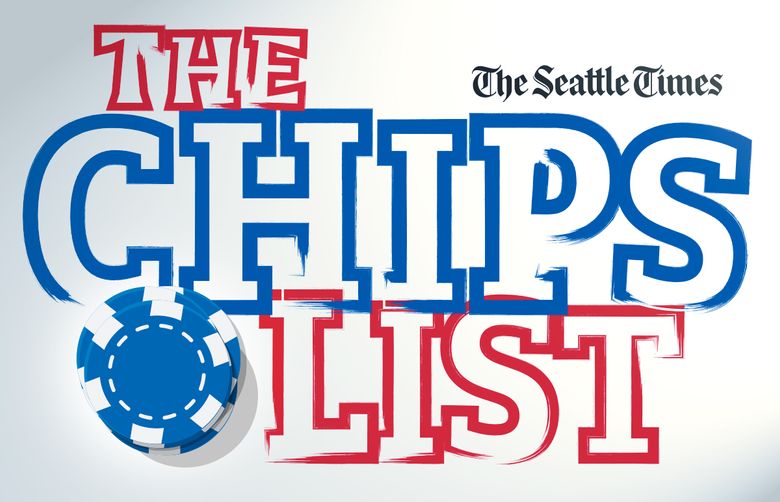 Consider this: There are 52 players on the 100-player Seattle Times chips list who are uncommitted or unsigned the week before February signing day, a number higher than most years.

Area high-school coaches do not need to look at the numbers to know there is a difference, especially when it comes to the players who are not high-level recruits coveted by Power Five programs.

“I have at least two kids right now who aren’t being recruited very heavily that five years ago, 10 years ago — even two years ago — would have been at Central (Washington) or Western Oregon or somewhere like that. I’m still holding out hope that these two will get recruited and end up playing on Saturdays, but right now it’s pretty slow,” said Tom Tri, the Lake Stevens High School coach. “It’s the smaller schools — Division II, Division III, the NAIAs and even the (FCS) — that I’m not seeing as much as I would have two years ago.”

Said Dave Miller, the longtime Lakes (Lakewood) coach: “I don’t see much of a difference with the top guys, but those are the guys who had the early offers anyhow — the 6-foot-5 guys who can’t miss. But the guys who are right on that bubble? I have kids in our program that I think would normally be a scholarship kid who are on that fringe.”

The reason for the sudden change? It’s complicated. But here goes:

A logjam because of the extra year of NCAA eligibility

The NCAA ruled in 2020 that players would be granted an extra year of college eligibility because COVID-19 had disrupted so many teams’ seasons.

That makes for tough decisions for college-football teams. Every super senior who stays on scholarship means one fewer scholarship for a high-school player.

“I had a Pac-12 coach tell me that that’s cool, that they’re giving the kids an extra year of eligibility, but at some point we are going to have to pay for it,” said Brandon Huffman, national recruiting editor for 247Sports.com. “They would much rather have a kid come back for his super senior year than get a kid who has played 15 games of varsity (high school) football over two years.”

That has meant smaller recruiting classes. Washington, for instance, signed five players during December’s early-signing period, and the final tally — expected to be around 15 — will be well below the maximum of 25.

Tri said the extra year of eligibility means there are logjams at some positions for college teams, and that is impacting recruiting.

“So they might not be recruiting that linebacker, defensive end or wide receiver that they would have the year before, because they have a pileup at those positions now,” Tri said.

Another option is telling the super seniors they can’t return on a scholarship.

Darren McKay, the coach at Curtis High School in University Place, feels for the tough decisions college coaches have to make.

“What’s it like to tell a kid you can stay (as a super senior), but we’re going to waive your scholarship so we can bring a kid in who is going to be with us the next four or five years?” McKay said. “That’s a tough deal for those coaches.”

Many of the top players in a class are identified early in high school. Those are usually the players who develop physically early. For the late developers and the lower-starred recruits, the junior season is all-important.

That is when colleges decide which players to target.

There was no high-school football season in Washington in 2020. A shortened season was played in the spring of 2021. Washington State University director of player personnel Rob Schlaeger said that was after most colleges had come up with their board of recruits.

“They already had their targets in place and were just looking to solidify their class at the point those kids finally got to play,” Schlaeger said.

Many states had high-school football seasons in 2020, and Huffman said there “is no question” that it put Washington’s seniors this year at a disadvantage.

Wood, who led his team to a Class 4A state title, committed to Fresno State this month after receiving no Pac-12 offers (and after decommitting from Eastern Washington).

“He is better than a lot of guys who have signed at Pac-12 schools in the past decade, and you can’t tell me with a straight face that this kid can’t play in the Pac-12,” Huffman said. “You are seeing a lot of impact players (from Washington) where scholarship offers didn’t roll in for them because their film was too late in getting out.”

McKay said delaying the season into 2021 also hurt players’ chances to play for smaller-level teams, such as those in the FCS Big Sky and Division II programs, including Central Washington.

“The reality is that before that mini six-game COVID season, they were already done recruiting,” he said. “So whatever that kid did in that six-game season, it didn’t matter because they had already made their offers to the people they thought could play for them.”

Schlaeger said having a 2020 season gave players from states that played advantages that went beyond just film.

“It’s not only because they played, but because of the process that led up to it,” Schlaeger said. “They had a full year of development, in the weight room, on the field, and 7 on 7. Here on the West Coast (where high-school players didn’t play), they didn’t even have the development, so they are lacking that element, too. They are behind from that perspective.”

The transfer portal and fewer opportunities

Many college-football teams are taking players who enter the transfer portal. That also cuts into the number of scholarships available for high-school players.

It is true that when a player leaves a program via the transfer portal it opens a scholarship at the school he just left. But that school might replace the departing player with another player from the portal.

“You need to fill that depth immediately, and that high-school recruit might give you that depth in a couple of years,” Miller said.

There are also fewer colleges playing football. Azusa Pacific in Southern California, which often recruited in-state players, shut down its program after 2020. Humboldt State in Northern California, another landing spot for area players, discontinued its program in 2018, continuing the contraction of Division II teams on the West Coast that has been taking place for decades.

“In the state of Washington, how many Division II programs are there? Just Central Washington,” Schlaeger said. “There are not that many places to play (locally) outside of Division I football.”

Said Tri: “There seems to be less and less opportunity for the blue-collar kids who technically should have a great opportunity to play on Saturday, but maybe don’t have as many opportunities as they might have five years ago.”

The big question is: Will things go back to normal — and if so, when?

“I am afraid that with what is going on with the transfer portal and COVID that it might make it hard for the next three or four years before things get back to the normal flow — when colleges are taking the full complement of 25 kids out of high schools,” Miller said.