SAN FRANCISCO — There is going to be anger. Frustration, too. Some regret will be there as well. But more than anything — sadness.

In its third straight year as a No. 1 seed, the Gonzaga men’s basketball team again fell short of ending its season as the nation’s No. 1 team. Arkansas bounced Bulldogs by a score of 74-68 Thursday and led for the final 21 minutes of the game.

It wasn’t so much a shock to the system as it was a sock to the stomach, as the Zags walked off the floor deflated after the upset loss. Fair or not, expectations for this program are of Himalayan heights, and it still hasn’t climbed to the top of the mountain.

“It’s always, gosh, just tough when it finally ends, especially short of the goal we had,” Gonzaga coach Mark Few said. “With the groups we’ve had, it’s the first time we’ve lost this round in quite a while. But again, all the credit goes to Arkansas.” 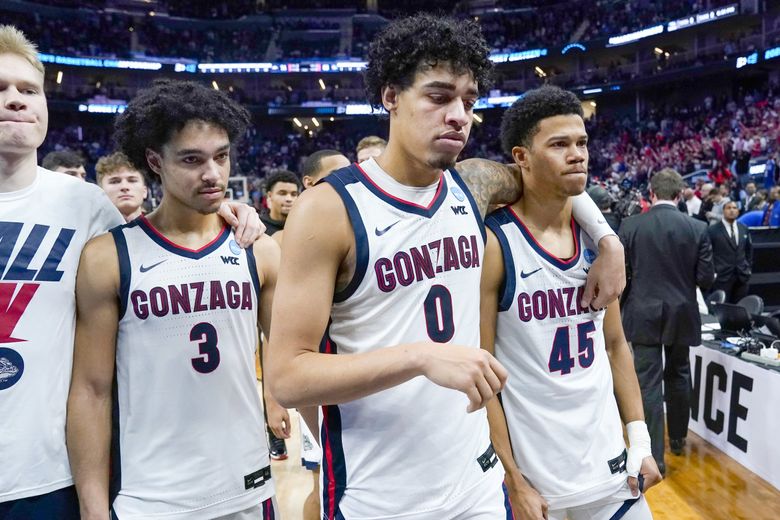 Indeed it’s been four years since Gonzaga (28-4) lost at this stage of the NCAAs. The season before that 2018 exit, the Zags went to the NCAA championship game, where they returned last season before falling to Baylor. One should always take the field against one team in this tourney given how much parity there is, but that won’t be of much comfort to the dejected Bulldogs fans right now.

So how did this happen? First, there’s the anger. Freshman star Chet Holmgren fouled out after some questionable calls. The WCC Defensive Player of the Year logged just 23 minutes — in which he still managed 11 points, 14 rebounds and two blocks. But his absence, particularly on the defensive end, was sorely missed with his limited playing time.

Few didn’t comment on any of the dubious whistleblowing. He’s too seasoned a vet to do that. But when the potential No. 1 pick in this upcoming NBA draft is sitting on the bench that long, it’s going to have an unquestionable impact on the game.

Next there’s the frustration — the Zags just couldn’t make shots. Well, the team’s leading scorer Drew Timme could — he finished with 25 points on 9-of-19 shooting. The rest of the Bulldogs? 15 for 45.

The three-point shooting was particularly atrocious, as Gonzaga went 5 for 21 from deep. And one of those triples came via starting guard Andrew Nembhard (who finished 2 for 11 from the field), when the game was already over.

Arkansas — which forced 15 turnovers while committing just eight — deserves plenty of credit for this, but there were an abundance of open looks for Gonzaga that did not translate to points.

“(Whoever wins the tournament) will be really, really good, and they’ll probably have some good fortune smile on them in order for that to happen,” Few said. “We didn’t have much of that tonight. We had a lot of things rim out.”

Next, there’s the regret. Particularly on a pair of rebound opportunities toward the end of the game. The first came with five minutes left and the fourth-seeded Razorbacks leading 59-54. Arkansas’ Au’Diese Toney missed a layup, but Holmgren and teammate Julian Strawther knocked the ball off each other, allowing JD Notae to secure the offensive board, kick it out to Jaylin Williams and watch him drill a three to put his team up eight. The next came with 53 seconds and the Zags down four, when Notae missed a jumper and Toney got the board, forcing Gonzaga to foul.

Doesn’t mean the Zags would have won had they gotten both of those 50-50 balls, but they would have given themselves a chance. They didn’t really do that in the closing minutes Thursday.

Finally, there’s the sadness. This one is going to linger for a while — among the players, coaches and fans alike. Gonzaga has been the college basketball’s most consistent team over the past several years — reaching the Sweet 16 in each of the past five seasons in which there was a tournament. But the inability to hang a banner looms over the program.

Few said Thursday that it shouldn’t — that the season was spectacular and the championship-or-bust expectations are unfair. Doesn’t mean they’re not still there, though.

Asked what he said to his teammates after the game, Timme grew emotional.

Who knows if Timme will be back for his senior year next season. He’s done plenty in his three years in Spokane. Still, after this result, you gotta think there’s a little more to do.