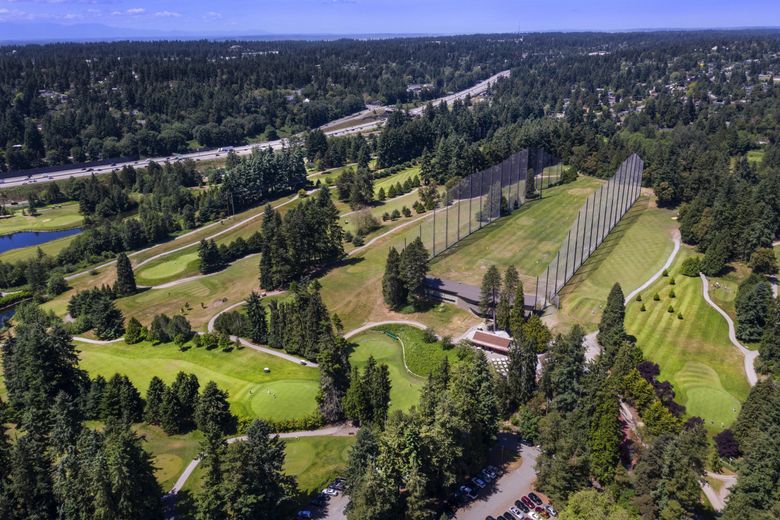 Seattle is considering what to do with the 4 city-owned golf courses, including this one — Jackson Park in north Seattle. Interstate 5 is just above the course. (Steve Ringman / The Seattle Times)
By
Scott Hanson
Seattle Times staff reporter

What should Seattle do with its public golf courses and the 528 acres of mostly green space they occupy?

That’s a question being asked by the city, which commissioned a study looking at the future of the city’s municipal courses — the only public golf courses in Seattle.

No one is suggesting, yet, that Seattle ditch one or more of its courses, but the fact that it’s even a topic of conversation has golfers worriedly making the case for their sport.

Seattle has been in the golf business since 1915, when Jefferson Park Golf Course opened on Beacon Hill. The other public courses are Jackson Park in North Seattle, West Seattle Golf Course and Interbay golf center, purchased by the city in 2001.

“Cheryl told me, ‘We haven’t heard from any golfers,’” said Anthony, a member of the West Seattle Golf Course women’s club. “That’s because they didn’t know. That’s when I started contacting people and getting motivated to start a citizen effort.”

Anthony put together a Save Seattle Golf meeting at Jefferson Park Golf Club late last month, publicizing it with a few signs at city golf courses.

She expected maybe 50 people. Instead, there were a few hundred, with the crowd spilling outside.

“I was blown away by the turnout and the support that demonstrated how many people want to keep our golf courses,” Anthony said.

The city courses use dynamic pricing, meaning rates vary by demand, but generally top out at $37 for the 18-hole courses. Juniors (ages 6-18) can play the courses for $5 during most times; there are reduced rates for seniors and military; and the courses are also used by high schools and the nonprofit First Tee youth program.

The country clubs in Seattle, bv contrast, have initiation fees, often quite costly, and monthly dues that make them much more expensive.

“These are not played by people who belong to private golf courses, and it’s a very diverse people population,” said Bill Schickler, founder and president of Premier Golf Centers. “You’ve got grandparents playing with grandkids and kids, and you’ve got women and men of all ethnicities playing these courses and they are very much in need as a resource for sport and recreation in the community.”

Still, they take up big chunks of land, and the city has a lot of needs. ­­­­The total acreage of the courses is nearly as big as Seattle’s massive Discovery Park, or nearly 8 times the size of  Seattle Center.

“I think it’s time to take the next step and do an analysis of other ways we can meet the demands of people who want to be outdoors and golfing, and what other functions those golf courses might do for the city of Seattle and the city in the future,” Durkan said.

Much of the study focused on the financial health and sustainability of the golf courses. From 2013-17, the courses combined to have a net profit in operating income each year. But factoring in the 5 percent the courses give back to the Seattle Parks fund and debt service on improvements made at the courses put them $1.8 million in the red.

In 2017, the courses had $10.2 million in revenue and $9.8 in expenses, not including the payment to the parks or the debt-service payment.

However,  “2017 was very poor weather year, whereas 2018 was a stellar year. In 2018, they achieved record revenues in virtually every category. Our revenue was almost $1 million better than budget, and in 2019, we are running already a half a million dollars ahead of budget revenue for 2019 (as of the end of May),” Schickler said.

All of the courses could use significant repairs and improvements. Seattle Parks identified $35.6 million in capital improvement projects.

Seattle has owned 18-hole municipal golf courses since 1915, when Jefferson Park Golf Course opened in Central Seattle. Jackson Park in North Seattle opened in 1930, followed by West Seattle in 1940. The Interbay golf center – a nine-hole par-3 course designed by Jack Nicklaus, a miniature course and driving range – opened in 1997 and was purchased by the city in 2001.

If those improvements are made, it would add to the debt service the courses are already paying. The study looked at four different scenarios for 2027, with projected losses (including non-operating expense) ranging from $4.1 million to $8.4 million of losses, much of that coming from anticipated debt service.

Schickler said that’s not a fair assessment, when compared to other recreation opportunities in the city.

“Pools and other recreation aren’t asked to pay for their costs of construction,” Schickler said. “The courses themselves make money, but it’s other overhead. The parks fund pulls money out of (the courses) for other programs and now they are paying for the interest on the debt. It’s only after those items are included that there is any deficit.”

The study made 30 overall recommendations, with the first being to “commit to golf as a recreational program offered by the City on par with other recreational offerings.”

But the other offerings, such as tennis and swimming, don’t take up the same amount of potentially valuable land. The green space, everyone seems to agree, is important.

“We are unbelievably fortunate that we have this resource in the city of Seattle, and the study confirmed my belief that having that kind of open green space is something valued, whether you golf or don’t golf, and that there is a benefit to all of Seattle from having this resource,” Durkan said.

Golf boosters say Seattle is already underserved when it comes to public golf. Portland, for example, has eight 18-hole courses inside the city, according to golflink.com, with six of them municipal. Spokane has seven 18-hole public courses, including five municipal courses.

“Of all the cities in the Northwest, this has the smallest number,” Schickler said. “It would be really tough for the golfers, as crowded as it is. There are going to be people who can’t play.”

Durkan said the next step is “a lot of public engagement, and we also need to do analysis of some long-term models to see whether that is the highest and best use for those lands.”

Anthony is already fully engaged. But will her group be able to make a difference?

“I hope so; that’s my goal,” she said. “We are a huge city and four courses is barely enough. There is no reason why Seattle can’t support four golf courses.”