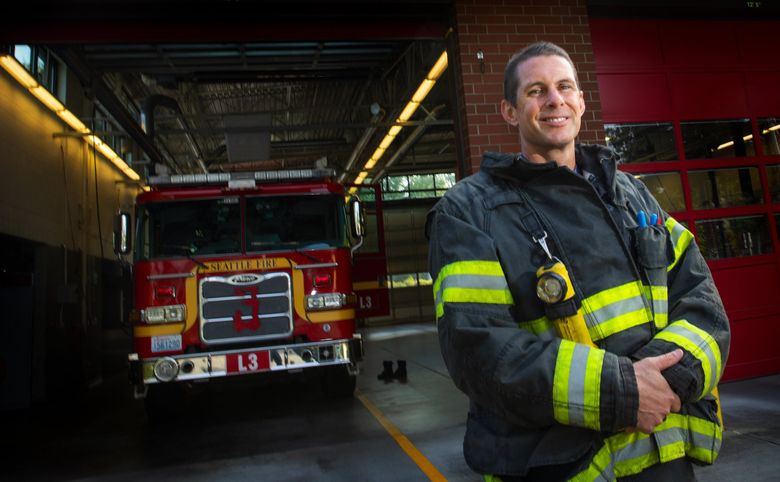 Ballad of the 'Solo Man' A Seattle firefighter's quest to outlast adversity in 2020, one step at a time

Seattle firefighter/triathlete Jimmy Watts stands in front of the Seattle fire station where he works. Watts, who has been competing in triathlons since he was 18, recently completed an “all-alone” Ironman triathlon (which he dubbed “Solo man”) as his personal response to 2020. (Ellen M. Banner / The Seattle Times)

He runs through it. He always has. The Seattle firefighter, 43, competed in his first triathlon before he could drive; his mom had to drop him off. His wife Julie says “he loves a challenge. He just likes to do hard things.” He was an eagle scout at 17 and a firefighter at 23. He grew up in Spokane but chose to settle in Seattle, because “I wanted to work in the biggest and busiest fire department available to me.”

For two decades, Jimmy has served in south Seattle and the Central District. He has made a living confronting a fact of life.

“In my experience, when you go to the busy fire departments and the busy fire houses, you find yourself surrounded by people that want to do good work,” said Jimmy, who studied to become a paramedic before pursuing firefighting instead. “They want to rush out of the fire house as fast as possible and as often as possible towards that 911 call.

“Running fire calls is like anything in the sense that the more you do it, the less of an adrenaline hit you’re going to get from it. If that’s the draw, there’s just no longevity in that. But if the appeal is service — if the appeal is to help — then you don’t tire of it and you just want to go on as many calls as you can.”

Some calls, of course, are more menacing than others. In 2010 Jimmy suffered significant burns on the left side of his body in a house fire — resulting in surgeries where skin from his thigh was reapplied to his left arm. In March he tore his left meniscus while crawling into a house during a search-and-rescue exercise. He had surgery March 17, but physical-therapy services were unavailable because of the COVID-19 pandemic.

“I got on my bike the day after the surgery, trying to make one revolution with the pedal. The next day it was two revolutions, and that’s how I rehabbed it,” he said.

The pandemic impacted the Watts family in other ways as well. Julie works as a nurse at a hospice house, where the realities of the pandemic were unyieldingly apparent. Jimmy and Julie continued to go to work but worried about potentially bringing COVID-19 home to their kids — Cody (13) and Taylor (12). Cody had a heart defect surgically repaired when he was 9 and thus could have been more vulnerable to the virus. And, on top of that, the boys’ classes, sports and activities were canceled; their routines instantly evaporated as society shut down.

And like everything else, Ironman triathlons everywhere were canceled. Jimmy had hoped to complete his sixth Ironman this summer — 140.6 combined miles of swimming (2.4 miles), biking (112 miles) and running (26.2 miles). But 2020 unsurprisingly refused to cooperate.

So he decided, instead, to run (and swim, and bike) through hardship.

At Lake Padden in Bellingham, the “Solo Man” was born.

But physical endurance, of course, also would be a factor. For three weeks leading up to the event, he trained for roughly 12 hours per week at Lake Padden — all while working at the fire house as well. Bellingham’s gyms and pools remained closed, so he swam in the lake and ran and biked on the loop that surrounds it.

As for his meniscus — part of which was removed — he says “it was as recovered as it was going to be.”

The circumstances were not ideal.

And in another way, they were.

“I did about half of the training I would normally want to do for that distance,” Jimmy said. “So I knew it was going to hurt. But that was part of the motivation. Because what every one of us is dealing with right now with COVID, with the economics, with the social (justice movement) going on, none of us were ready for it, right?

“That, to me, is the crux of the metaphor. Whatever the challenge is, when you see it coming and you get ready for it, that’s a totally different deal than when you’re blindsided. While I wasn’t ready to do another Ironman, I was like, ‘That’s all the more reason why I want to do it.’ ”

The metaphor lasted 12 hours and 46 minutes.

It started at sunrise — 6:22 a.m. — when Jimmy submerged himself in the icy waters of Lake Padden, wearing a wet suit and a Garmin to track his time.

“It was beyond gorgeous,” said Julie, who met Jimmy at her first triathlon 24 years ago. “To be out there at 6 in the morning, there wasn’t even another car out there.”

There was just Jimmy — who completed the 2.4-mile swim in almost exactly 50 minutes — and two of his most steadfastly supportive fans. Julie and Wilson Watts, a 3-year-old golden retriever named after Seahawks quarterback Russell Wilson, watched from the car. When Jimmy finished, Julie gave him his bike, and the second (and longest) leg began.

While I wasn’t ready to do another Ironman, I was like, ‘That’s all the more reason why I want to do it.’”

That leg stretched through Whatcom County’s extensive farm country, where Jimmy mapped out a 16-mile loop. In six hours and 45 minutes, he completed the loop five times (while also biking to and from the lake to add an additional 32 miles).

“The bike ride felt really great,” he said. “It was beautiful. It was quiet.”

And it was equipped with an unconventional aid station as well.

“There was a construction site on that loop that had a Port-a-Potty,” Jimmy explained. “So I stashed a small cooler and a gallon of Gatorade and a gallon of water out behind that Port-a-Potty that morning. I woke up at about 4 (a.m. to do it). I knew it was there. So before I jumped in the lake I drove out there, dropped some food and some liquid. So that was kind of my aid station throughout the bike ride.”

And Jimmy received aid in more ways than one. After the swim, Julie drove roughly 15 minutes to their house, retrieved Cody and Taylor, and the three of them set out to find the “Solo Man.” They tracked Jimmy using his “Find My iPhone” app, and blasted music and yelled encouragement out the window as they drove.

Still, for long stretches, there was only solitude.

Which, by the way, is what Jimmy intended.

“In light of the social movements that are going on all over the country — that are going on in sports — the whole notion of trying to tackle these distances all alone, it kind of resonated with me,” he said. “Because as much as social movements are collective, just like a normal Ironman race would be a collective movement of 2,000 people participating, those sort of struggles, ultimately, we face them alone.

“You can be in a race with 2,000 athletes to the finish of that 140.6 miles, but ultimately that struggle is just you — just you and that isolated shell of yourself. As much as these social movements are collective, every one of us is laying in bed at the end of the night by ourselves, just thinking about it and working our way through it.”

On Sept. 6, Jimmy swam, and biked, and ran through it all. He completed the final run back where he began, tracing the 2.6-mile loop surrounding Lake Padden 10 times. He stopped only at his car’s makeshift aid station — where bananas and pretzels and peanut-butter and jelly sandwiches were stashed in the trunk.

You can be in a race with 2,000 athletes to the finish of that 140.6 miles, but ultimately that struggle is just you — just you and that isolated shell of yourself.”

For five hours and 11 minutes, the “Solo Man” ran.

He confronted hardships with courage, one step at a time.

“Anybody who has done an Ironman will tell you that at some point in that race, over that distance, no matter how well prepared you are, that impulse to quit is going to start creeping up,” said Jimmy, who has never voluntarily quit an Ironman but failed to complete a race in Penticton, British Columbia, in 1998 when he collapsed off his bike and had a seizure due to heat stroke. “That impulse to quit crept up for me during those last three or four laps of the run. The cramps were showing up. I started feeling what I’m guessing was a small muscle tear in my left calf. Rationally, I was telling myself, ‘This isn’t worth getting hurt over. I still need to show up for work on Monday.’ And emotionally I was tired.

And, to further the metaphor, the Watts family overcame adversity together. Jimmy, Julie, Cody and Taylor all chose to run the final three laps. At 7:08 p.m., Jimmy crossed the finish line while holding hands with his sons.

In the end, the “Solo Man” was anything but.

“One thing 2020 has really brought into focus is how close my family is,” Jimmy said. “We’ve become closer. We’ve been quarantined together. We have each sacrificed a lot, and we have each helped each other out a lot. Doing that Ironman alone, for the entirety of that race, I didn’t speak to anybody. With the exception of my wife and boys, I didn’t see anyone I knew. No one was cheering. No one was watching. No one was paying attention.

“Even running around Lake Padden 10 times, no one knew what I was doing. No one cared. It would have been easy to quit, and no one would have even known. I essentially would not have let anybody down. Except I would have let myself down, and I would have let my boys down. That sort of forced integrity of doing it alone was incredibly motivating.

“Any father, especially a father of boys, will tell you how hard we try to set a good example for them. So for them to essentially drag me across the finish line — they were pulling me — was just super special, and kind of the way it’s supposed to be.”

Added Julie: “It meant a lot to him. I could tell he really needed us.”

When it ended, Jimmy Watts walked directly into the lake. In 12 hours and 46 minutes, he burned 14,483 calories, while his heart beat 126,380 times. His body rebelled with muscle aches and a migraine headache.

That night, his whole family slept under the stars.

“It took at least a day to sort of come down from that,” said Jimmy, whose family sleeps on mattresses and blankets spread on their deck most days in the summer. “And then with the muscle twitching and the muscle soreness and achiness, it felt like a horrible night — especially with the headache.

“But at the same time, it felt so wonderful to be outside with my family and the dog. It was a beautiful night. The smoke had not come in yet. Even though I wasn’t sleeping well and I was restless, I was like, ‘You know what, I feel good.’ ”

The next day, Jimmy Watts got up and went to work.

He set out for Seattle. He stayed in the game.