The Future of Policing: As protesters across the country demand sweeping changes to law enforcement, The Seattle Times begins an examination of what that future could look like and the hurdles ahead. Today, police discuss what, in their view, needs to be fixed.

It was 1982, and he had recently finished graduate school, earning a master’s degree in social work, when Seattle’s police chief stopped him after church one Sunday to ask him to join the force.

But Hayes, who is Black, had been stopped by police multiple times before and questioned over the years about robberies, drug deals and other crimes he never committed.

“I was nervous,” Hayes said, “because of the different experiences I had with the police.”

He became an officer anyway, overcoming his own uncertainty about law enforcement, eventually rising to the rank of Seattle Police Department captain and serving in leadership positions in state and national Black police associations.

Nearly four decades later, however, widespread uncertainty in the U.S. lingers for so many others, a reality underscored by the massive protests decrying the killings by police of Black men and women, including George Floyd in Minneapolis. Officers are being confronted, almost daily, by protesters and some local leaders to defund law enforcement departments, abolish them altogether or enact other sweeping public safety reforms.

Interviews with about a dozen current and former police officers in Washington suggest some in law enforcement are open to another round of change, especially for reforms already underway, such as improving crisis intervention and the use of body cameras, while others resist criticism or calls for more change. All, however, reject calls to defund the police.

For Hayes, former chairman of the National Black Police Association and former president of the Black Law Enforcement Association of Washington, the killing of Floyd, who died after a Minneapolis officer knelt on his neck for nearly eight minutes, followed by public outpouring of grief and the fallout for police, have all been deeply painful, he said.

“How that officer has impacted every department in the nation — their efforts and my efforts have been wiped out,” said Hayes. “We have to start again.”

Like other officers, Hayes opposes deep cuts in police funding, but said money could be redirected within departments to increase outreach and hire more social service and mental health professionals.

In interviews with the former and current officers, there was consensus that the outcry on the streets over Floyd’s killing is justified, even as they rejected protesters’ central defunding message.

If anything, they say they need more of the costly training, body cameras and other resources that have been required by court-mandated reforms in Seattle and other cities that have aimed to curb excessive force and de-escalate standoffs and other encounters with the public.

However, concerns around longstanding problems persist, perhaps most of all questions around bias in policing after years of federal oversight, training and rewriting of policies. 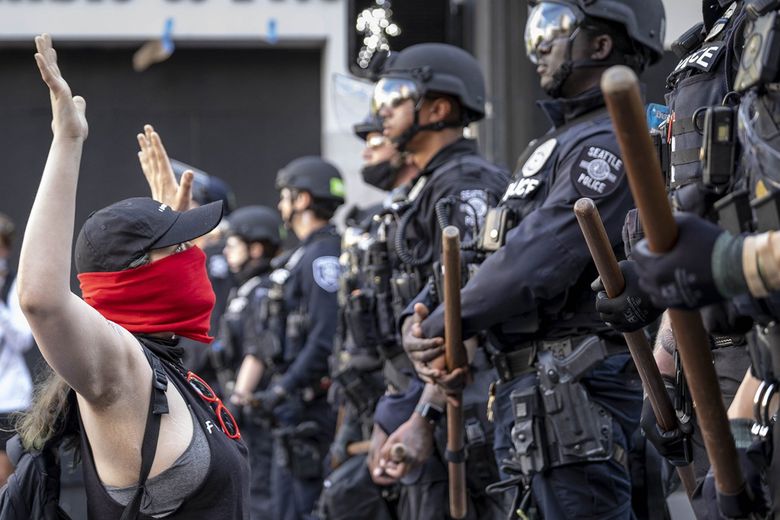 In its most recent annual use-of-force report, SPD data showed the rate at which officers used force in 2019 amounted to less than a fifth of a percent of all dispatches. Still, people of color were overrepresented in the data.

Of all uses of force by Seattle police, about 29% were against Black people, compared to Seattle’s population, which is 7% Black, according to the SPD report released earlier this year. The use-of-force data in the report accounted for instances that ranged from an officer striking a civilian hard enough to cause pain to an officer fatally shooting someone, which happened twice last year.

Many protesters in support of the Black Lives Matter movement have made clear they no longer have faith in the system. On a recent night near the East Precinct, the ever-changing landscape of graffiti included, “NO REFORM. ABOLISH POLICE.”

Meanwhile, Seattle police Chief Carmen Best has said repeatedly on national television that it is time to re-envision the future of policing. Yet, Best and other law enforcement officers have not offered a clear picture of exactly how they might be willing to change their work.

In a statement Tuesday, Best said “re-envisioning community safety” would start with more community outreach by police; a review of noncriminal 911 calls and “alternate responses”; finding “an appropriate response” to misdemeanors; and other steps.

Among rank-and-file police, there is little movement toward a large-scale reckoning.

“We have felt misunderstood, spurned, betrayed and our working conditions have significantly deteriorated,” the board of the Seattle Police Officers Guild (SPOG), told a group of labor unions in a written statement. “But we continue to come to work every day, to serve even those who reject us and insult us.” (SPOG president Mike Solan did not respond to messages seeking comment.)

Seattle police have resisted reforms before. In 2014, more than 100 SPD officers unsuccessfully sued to block new use-of-force policies. Later, SPOG filed an unfair labor practice complaint over an executive order to equip officers with body cameras, arguing it disregarded state bargaining laws. This month, the union said it believes recent bans on chokeholds and crowd-control weapons should be subject to collective bargaining.

The SPOG board said in its recent statement members had welcomed civilian oversight, but called recent events a “painful period for our officers.”

Two current Seattle police officers rejected criticism from politicians and protesters, saying the department had made strides while participating in a significant reform process that has been tracked by a court-appointed monitor.

The officers welcomed more mental health professionals in the field or handing off certain property crimes. They did not embrace the idea of other workers in other agencies taking the place of police. The officers declined to be named, saying they worried about speaking out during the current protests.

“Seattle is being asked to fix the injustices — and they are injustices — that have been perpetuated throughout the country,” one officer said. “We can’t fix Minneapolis in Seattle.”

On the streets, Seattle demonstrators have made clear they are not protesting just faraway departments, but problems they see at home, too.

At the SPD’s East Precinct on Capitol Hill, where protesters have occupied the area, a mural on one boarded-up surface of the precinct depicts Charleena Lyles, a pregnant Black woman, who was killed by Seattle police three years ago. A vigil for Lyles drew hundreds of people to Magnuson Park Thursday.

Protesters have chanted the names of Native people killed by police, including Renee Davis, a member of the Muckleshoot Indian Tribe and pregnant mother who was shot in 2016 by King County sheriff’s deputies on a welfare check. In Tacoma, they have marched to call for justice for Manuel Ellis, a Black man and father who was killed in March while being arrested and restrained by Tacoma police.

In some corners of law enforcement, mostly among those who have retired, there is an openness to the push to narrow police work, especially for nonviolent calls. Police have taken a growing role in responding to people in mental health crisis or moving along homeless people, calls that reformers say could someday be handed off to unarmed workers instead.

Traffic stops, which can disproportionately affect people of color, could be turned into educational stops without officers issuing tickets or searching vehicles, while mental health calls could be answered by unarmed workers, said former Seattle police Chief Jim Pugel.

“I strongly feel we’re always going to need police officers to a certain extent, but I’ve also witnessed that for the cost of a fully outfitted … police officer, you can hire two to three case managers,” said Pugel, who now works helping other cities set up the Law Enforcement Assisted Diversion (LEAD) program.

The median base salary for SPD patrol officers last year was about $150,000, according to city records.

The hardest part of reform, however, will be rooting out racism and bias in the ranks —  issues at the heart of the protests against police violence that have swept Seattle and much of the U.S.

“Until we somehow resolve that problem, reforms are going to be meaningless,” said Phil Stinson, a criminal justice professor at Bowling Green State University and a former police officer. “I don’t see how we can train our way out of it with implicit bias training here and there.”

In Kent, Chief Rafael Padilla said intensive screening during the recruitment process offers one of the best chances to prevent racism in policing, though it remains much more challenging to address implicit bias.

His department conducts psychological screenings with recruits to check for racist tendencies and bias. The department also checks backgrounds in community service.

Officers should be screened for implicit bias not just when they are hired, but also throughout their time on the force, said Fabienne Brooks, retired chief of the criminal investigations division at the King County Sheriff’s Office.

At the state level, the Washington State Criminal Justice Training Commission has begun preparing to train officers on the history of race and policing, said Monica Alexander, manager of the agency’s advanced training division and former Washington State Patrol captain. The training is required under Initiative 940, a ballot measure passed in 2018 that requires new training and changes how police killings are investigated.

No date has been set for when the training will begin, though Alexander said her team is working to start it as soon as possible. In the meantime, law enforcement agencies also must do more to hire officers of color, Alexander said.

“We keep saying it, but we’re not quite doing it: Police forces should reflect communities we patrol,” she said.

When Hamm was commander of the Baltimore Police Department’s Central District in 1994, city leaders were desperate to clean up the area and offered the district more dollars in the form of “unlimited overtime” for officers, Hamm recalled.

Hamm instead recommended putting the money into education and community centers, but was not heeded.

To start, Hamm said, police departments should apologize. In Baltimore, he said, “I went to 260 community meetings, personally … I said, ‘In our arrogance, we thought we knew what was best for you. We were wrong. You tell me how you want us to police you.’”

Some key next steps for police departments will be listening to community complaints and continuing to try to build relationships in communities, even as they contend with public criticism and anger, added Hayes, the SPD captain. The past decade in police reforms has brought change for many officers and an approach to policing that centers de-escalation techniques, but he said it’s clear there’s more to do.