Welcome to the CHAZ, the newly named Capitol Hill Autonomous Zone, where most everything was free Tuesday.

Free snacks at the No-Cop Co-op. Free gas masks from some guy’s sedan. Free speech at the speaker’s circle, where anyone could say their piece. A free documentary movie — Ava DuVernay’s “13th” — showing after dark.

A Free Capitol Hill, according to no shortage of spray paint on building facades. And perhaps most important to demonstrators, the neighborhood core was free of uniformed police.

A new protest society — centered on a handful of blocks in Seattle’s quirky, lefty Capitol Hill — has been born from the demonstrations that pushed the Seattle Police Department out of its East Precinct building.

On Tuesday, demonstrators hung a banner on the police station: “THIS SPACE IS NOW PROPERTY OF THE SEATTLE PEOPLE.” Teenagers passed a bottle on the exit ramp for police vehicles. A young man carried a long rifle down the sidewalk, despite the mayor’s ban on weapons in Capitol Hill, which has not been clearly enforced.

A man passed out flyers calling for a Thursday meeting to help answer the question now lingering for demonstrators.

“I support this, but what’s next?” said Max Hodges.

That sentiment summarizes a cascade of questions demonstrators now face. Autonomous from what, exactly? Who is leading? How long can it last? Is it a distraction from the larger movement for police accountability and racial justice?

Sarah Tornai, a demonstrator leading by microphone Tuesday, called for pragmatic organization so demonstrators remain safe and in control of the area.

“We do not know when the police will arrive to reclaim this space,” Tornai told the crowd.

Musician Raz Simone, emcee of the free speech circle at 12th and Pine on Tuesday, called for long-term occupation.

“This is not Coachella,” Simone said, but an opportunity for demonstrators to make it what they want. “Bring your sleeping bags and tents. We here.”

Tornai said the demonstrators intend for the East Precinct to become a community center and location for organizing “beyond protest” and for community action.

Tornai envisioned education initiatives, programs to address homelessness and building a community movement where unarmed police are designed to de-escalate. Tornai said demonstrators offered ideas on “how we can more compassionately organize our city.”

To Tornai, the phrase Capitol Hill Autonomous Zone means people want to be “autonomous from the way the Seattle Police Department has been policing them.”

For Michael Taylor, it represented a vision of a future with fewer police officers.

“From what I’ve gathered, we’re trying to take our community back so we can live without a massive police force patrolling the streets,” Taylor said, adding that since police left, “I noticed I’m looking over my shoulder less.” (Seattle police are still responding to 911 calls in the area.)

The movement — loose, egalitarian and scattered for now — seemed to hearken to previous moments of social change.

A speaker Tuesday afternoon mentioned the Occupy movement; a handful of people raised hands to acknowledge they’d been part of that effort. The speaker warned of lost momentum and infighting.

On March 8, 1970, more than 100 members of United Indians of All Tribes and their allies took over Fort Lawton, which would later become part of Discovery Park, proclaiming:

“We the native Americans reclaim the land known as Fort Lawton in the name of all American Indians by the right of discovery.”

Dozens later were arrested by military police. Some protesters said they were injured.

Months of demonstration ultimately led to construction of the Daybreak Star Indian Cultural Center in 1977. The center hosts a permanent art collection and serves as a Native American cultural space.

In October 1972, Latino activists, after months of negotiations with Seattle leaders over community space, occupied the shuttered Beacon Hill Elementary School. Dozens stayed to sleep in classrooms after a tour of the abandoned building.

“We are trying to dramatize our needs to unresponsive agencies,” Roberto Maestas, a leader, told The Seattle Times nearly 50 years ago.

After spending months there, demonstrating and even occupying City Hall chambers, the school building was renovated and the community group, El Centro de la Raza, had a home. The social justice organization remains influential today.

In November 1985, a group of people moved into the vacant Colman School in Seattle’s Central District and said they would not leave until the school became a museum and community center.

Activists remained in the building for more than 8 years. The school eventually became the Northwest African American Museum.

In 2013, an occupation of Seattle Public Schools’ Horace Mann building by members of groups that work with Black youth ended in arrests of four people.

“It has been a constant of sirens and helicopter noises,” said Sophia Lee, who lives about a block from the East Precinct, adding that it was a “relief” that violence subsided and she could walk home without fear of retaliation from the police for protesting.

Tear gas had leaked into neighbors’ apartment units, Lee said, and one night, “my entire face was burning” on a walk.

“There’s no singular central organization or person that’s leading all of this,” Lee said, adding that “autonomy” on Capitol Hill “depending on the person, it means so many different things.”

Unconfirmed rumors circulated among demonstrators that white supremacists intend to target protesters now that police are gone, Lee said, which was concerning.

Lee supports redirecting funding toward social services and re-envisioning the role of police, which she said wasn’t working for the community or the police.

“I do wonder if that’s going to work long term or not,” Lee said of the autonomous zone. “But, I’m willing to see and find out.”

Joe Hendrickson, who lives about a half-block from Cal Anderson Park, said he supports the protesters, who have, in his estimation, remained peaceful, nonviolent and sincere. Hendrickson, 72, said if not for concern over coronavirus, he would stand alongside demonstrators.

After seeing the video of George Floyd being killed by Minneapolis police, Hendrickson said, “I just give a lot more credence now to complaints about police violence than I did before.”

Hendrickson said he did not agree with the idea of disbanding the police but agreed public resources should be directed elsewhere.

“We’ve cut way too much of our social safety net,” he said, proposing that social workers could have space inside the East Precinct to work alongside police.

“We’re not real easy with the autonomous zone. My understanding is they’re patrolling and protecting, but they’re just random guys and they have a gun,” Hendrickson said, referring to reports of armed people on the Hill. “The street’s barricaded so emergency vehicles can’t get through.” (Demonstrators during a Wednesday live stream said they were responding to community concerns over egress.)

Seattle police Wednesday said they wanted to identify and talk with protest leaders about reopening the precinct.

“It will improve response times and allow detectives to continue to work their cases,” said Assistant Seattle Police Chief Deanna Nollette at a headquarters briefing. “It’s just a matter of establishing a dialogue so we can take down the plywood and welcome people back into the lobby.”

For a couple of nights, at least, demonstrators remained in control. 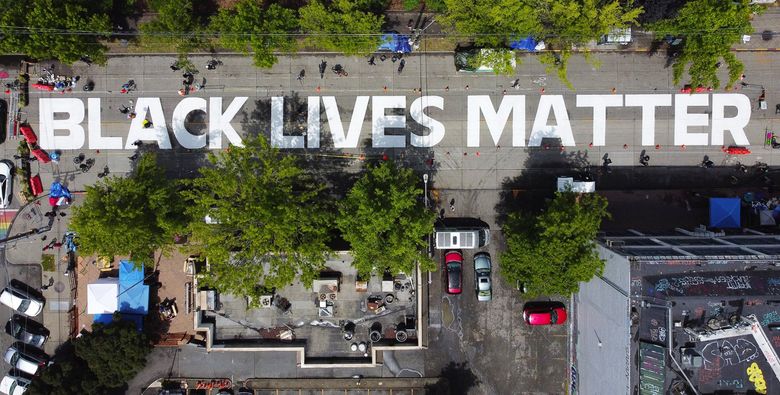 By dusk Tuesday, a couple paced the autonomous zone’s 11th Avenue using trash-picking equipment they said they purchased for Burning Man. The streets smelled like the Fourth of July, as people seared hot dogs on curbside grills. “REGISTER TO VOTE HERE” read a poster at volunteer station.

At 11 p.m., former President Richard Nixon’s face beamed on a projector at the intersection of Pine and 12th Avenue, as a crowd of perhaps 200 gathered quietly to watch DuVernay’s film about racism and inequality, just steps from the precinct. The crowd remained calm and peaceful. About a dozen tents were pitched along streets near the intersection, nestled in for the night, and promising an interesting summer.