Skip to content
By
Christine Clarridge
and
Asia Fields

Editor’s note: This is a live account of updates from the Puget Sound region’s snowy Monday. A full recap and outlook for the rest of the week is available here.

Puget Sound residents woke up to anywhere from a dusting to 9 inches of snow Monday morning, along with school closures and power outages.

The snow shut down Stevens Pass, leaving some travelers stranded overnight, and fallen trees closed some roads in eastern King County. Around 30 cars heading into Seattle were involved in multiple crashes on the Highway 520 floating bridge Monday evening, which was slippery in the below-freezing temps, according to Washington State Patrol.

Most of Western Washington is expected to get wind chills in the teens or colder into Tuesday morning, which could complicate the morning commute, and more snow is likely on the way this week.

Here’s what you need to know about the snow. We’ll keep this post updated all day as weather-related news develops.

What’s on the ground

The amount of accumulation across the region varies widely. Duvall had about 9 inches of snow early Monday morning — the most reported — but very little snow was recorded at Seattle-Tacoma International Airport, and about 2 inches was recorded at the weather service station near the University of Washington.

The area between Poulsbo and Suquamish, which was in the convergence zone Sunday night, had 8 to 8.5 inches of snow. The stretch of the Eastside between Redmond and Woodinville got about 5.5 inches overnight, Everett got about 5 inches, Lynnwood got 4 to 6, and Mountlake Terrace had 1 to 3, according to the weather service.

There’s a chance of snow in the Puget Sound region through Friday, particularly Monday and Wednesday nights. But with only light accumulations expected, it’s not going to be like last February, when the snow piled up for 10 days.

Last year, a strong blocking ridge of air, parked off our coast and stretching up to Alaska, prevented warmer air off the Pacific Ocean from reaching land, said Mike McFarland, a meteorologist with the National Weather Service in Seattle.

“That pattern was locked in for a long time,” he said. “There is very big reservoir of cold air over Canada right now, but we do not have the huge amplitude ridge that we had last year.”

Some scattered snow showers are predicted for Monday night, but the weather service isn’t expecting a lot of accumulation, McFarland said. A hard freeze overnight, however, means the chance for black ice and slick roads will remain for early Tuesday commuters, especially on the northern end of the Puget Sound region.

On Monday night and Tuesday morning, wind chills are expected to reach the teens throughout much of Western Washington, and could be below zero degrees in Whatcom County.

Another front will move ashore Wednesday night, and Puget Sound residents could see accumulation of half-an-inch to an inch of snow. Temperatures should start warming up Thursday and should approach the 40s Friday.

Many other schools in Seattle, north of Seattle and in the eastern suburbs were also scheduled to start late or were closed altogether, according to FlashAlert, which tracks most schools and districts in the region.

South King County and Pierce County didn’t get much snow overnight, and most schools at the south end of Puget Sound were open as usual, although some snow began to fall in that area Monday morning. Parents should check their school district’s website for the most up-to-date information.

Was last February’s ‘snowmaggedon’ a fluke, or can we expect more like it? We took your snow questions to the experts.

King County Metro buses were outfitted in chains in areas with challenging roadway conditions, and buses in north and east King County were rerouted Monday due to snow. You can check for the latest updates on your route at metrowinter.com.

Not every Seattle road is cleared when it snows: Narrow roads, steep roads and roads with speed bumps or roundabouts won’t get any attention, and roads on the steepest hills will stay closed as long as it’s unsafe to drive on them, Bergerson said Sunday. “We’re not Minnesota. We don’t have the number of vehicles and plows to plow every road,” he said.

Black ice posed a problem for morning commuters in some areas, but because daytime highs weren’t “super cold” Monday, most roads should be in “pretty good shape” for the evening commute, McFarland said.

Westbound lanes of the Highway 520 floating bridge closed for about four hours Monday evening after about 30 cars crashed on the slippery roadway. Washington State Department of Transportation (WSDOT) crews treated the bridge with salt and sand Monday night. They had last been treated around 3 p.m., according to the agency.

There were no major injures, and a Microsoft Connector driver let people sit inside the bus to stay warm, according to Washington State Patrol.

Here is another picture from the scene courtesy of LT Longoria. Approximately 30 cars involved in numerous separate collisions. Thankfully no major injuries! Drive safe tonight as the temps are below freezing. pic.twitter.com/PoiZowqZI8

In areas hit harder by the snow, drivers faced hazardous conditions. In Bellevue, one driver lost control on a snow-covered hill and slid backwards and rolled multiple times down an embankment, but was not seriously injured, according to police. 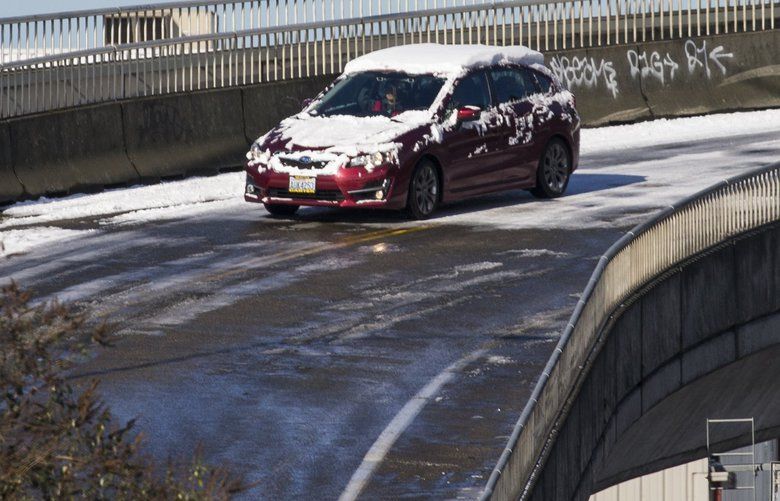 Driving in the snow can be a Northwest nightmare. Here's how to do it while saving your sanity.

Stormy weather battered traffic in the mountain passes much of the weekend, and finally knocked out Stevens Pass on Sunday, when WSDOT announced the pass was closed due to fallen trees and power lines.

On US 2: In the light of day it's easier to see the potential hazard for falling trees. That tilt you see means the trees are burdened with snow and could fall or break.

This is what we are seeing between Skykomish and the summit right now. The pass remains closed. pic.twitter.com/qughQsgxxo

Around 9:30 a.m. Monday, scores of travelers, including three charter buses full of middle school students, were led west after being stranded overnight in Skykomish by the snow and fallen trees, Axtman said. The rescued convoy was accompanied by troopers, WSDOT employees and vehicles, and a tree service company. The State Patrol planned to take a last eastbound convoy through to Index on Monday afternoon.

The pass first closed at about 2:40 p.m. Sunday between milepost 58 near the town of Scenic and milepost 84 near Leavenworth. As conditions worsened, WSDOT officials closed Highway 2 between Gold Bar and Skykomish.

Snoqualmie Pass is open, but with compact snow and ice on the road, traction tires were advised in both directions as of Monday afternoon. The forecast calls for lighter snow Monday at Snoqualmie.

Washington State University advised students traveling across the state to stay put and contact their instructors if it’s unsafe to travel.

No one will be turned away from shelter in the severe weather, according to the city.

Seattle’s Navigation Team, a group made up of police officers and outreach workers, is deploying across the city to get people inside. It’s focusing on areas where large numbers of people typically camp outside, like along the Interstate 90 corridor in South Seattle.

The Navigation Team will also pause its usual schedule of homeless encampment cleanups, Human Services Department spokesperson Will Lemke said, unless a tent or structure is completely blocking the sidewalk downtown or causing accessibility issues for people in wheelchairs.

The storm caused scattered power outages throughout the region and appears to have left all of Bainbridge Island in the dark. According to Puget Sound Energy’s outage map, more than 10,000 Bainbridge Island residents lost power around 3 a.m. A little more than 1,000 residents were still without power by 3:30 p.m., as crews continued to work to restore power.

The 2020 Womxn’s March on Seattle, originally planned for Saturday, Jan. 18, has been “rescheduled due to snow and cold,” its organizers posted on the event website. The rally at Cal Anderson Park and march from Capitol Hill to downtown is now scheduled for Sunday, March 8 — International Womxn’s Day.

We recently took more of readers’ snow questions to the experts, and here’s what they say about whether that February stretch of snow was a fluke or an event we can expect to see again soon.