Nature delivered a rare treat to thousands of people across the Puget Sound region Saturday, sending them outside to cast aside pandemic gloom to play in a foot of snow.

At least that’s one view. The other can be seen from behind a snow shovel, while assessing the damage of a fender-bender, or trapped on a Metro bus going nowhere.

By late Saturday afternoon, with all that Seattle greenery buried under all that white, the National Weather Service reported that the greater Seattle area had received between 8 and 10 inches of snow, said meteorologist Mary Butwin.

The snow, she said, was expected to continue through the night, fading by Sunday morning, then turning to rain. 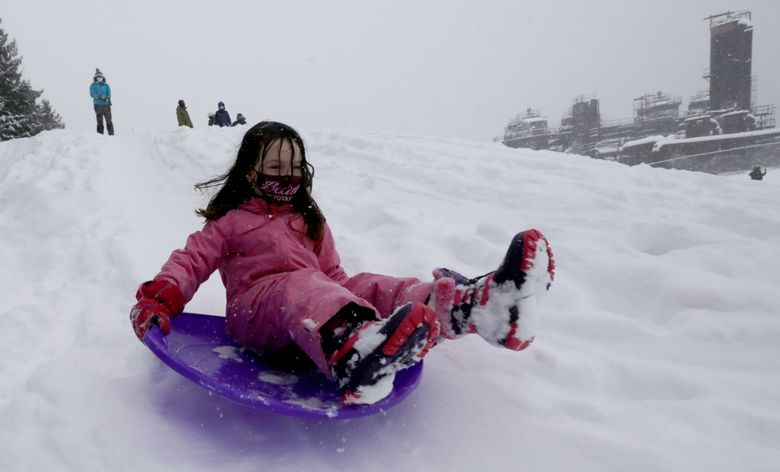 As families clomped through their yards Saturday to make snowmen, and long walks were imbued with that special snow quiet, Seattle opened its sports fields and four public golf courses to sledding. People played in the streets, and set up the customary instant slalom route down the Queen Anne counterbalance.

For many, though, the cold snap brought greater hardship. Seattle and King County opened extra shelter beds. First responders and outreach crews patrolled the roads looking for homeless people who might want to come inside, mindful that six people presumed to be homeless died of causes involving hypothermia last year.

The snow led many COVID-19 vaccination sites to cancel services. For those who couldn’t make it to their vaccine site Saturday or had their appointment canceled, most health providers should either be automatically rescheduling the time or contacting you about next steps.

Public Health – Seattle & King County said it would call people who were on Saturday’s vaccination schedule for its Auburn and Kent sites. Both were closed Saturday. People can also reschedule online.

Virginia Mason’s helpline said it would automatically reschedule those Saturday appointments. Fred Hutch said on its website that individuals would receive an email and text message with further directions.

For those who had been scheduled to get the second dose of the Pfizer or Moderna vaccine Saturday, Virginia Mason’s website told people not to worry because that dose can be “administered up to six weeks, or 42 days, after the first dose.”

On the roads, Saturday was rather a mess. At one point, 165 King County Metro buses were stalled on their routes and, as of late Saturday afternoon, 143 buses remained unable to proceed.

The Washington State Patrol closed the westbound lanes of Interstate 90 Saturday afternoon following a 15-car pileup that included three rollovers, near mile marker 34. Trooper Rick Johnson said there were injuries, but no fatalities.

But off the roads and on the grass, only a few hours remain to play, as meteorologists predict temperatures will break above freezing after 1 p.m. Sunday in Seattle. Snohomish County may see wet snow or freezing rain later in the day, the National Weather Service said.

Public officials urge people to shovel the sidewalks in front of their homes and businesses, and those of neighbors who are elderly or lack mobility.

“Clearing those sidewalks is not only the law, but the right thing to do,” said Sam Zimbabwe, Seattle Department of Transportation director, adding that city workers would be out checking and warning people to shovel. Zimbabwe also encouraged residents to clear storm drains to capture the week’s runoff.

The heavy snow resulted from a mass of Arctic air from Canada colliding with moist air from the Pacific, like atmospheric sumo wrestlers meeting over Washington state. Snow depths reached 10 to 20 inches near Olympia where the snow arrived first, but only 6 inches in Snohomish County by mid-Saturday, said Butwin, the meteorologist.

The snow aftermath should differ from the usual Seattle pattern where snow melts and refreezes. The lowland low Sunday night is only 35 degrees, forecasts say.

WSDOT will operate plow and salting crews through Monday, he said.

This was the heaviest Seattle-area snowfall since February 2019, when 20.2 inches fell, which in turn was the deepest since 45.4 inches in January 1969 — before man landed on the Moon.