Disappointed with the light snow that fell on much of the Puget Sound on Thursday. Sad there’s not more where you live?

Light snow started falling in the Seattle area Thursday, with greater accumulations south of the Puget Sound and on the Olympic Peninsula, said weather service meteorologist Courtney Carpenter. Areas of south of Olympia had received the most snow by early evening, with about 2 to 5 inches, she said.

But more is definitely on the way along with some gusty winds in western Whatcom County and along the Strait of Juan de Fuca that help set the stage for a winter storm.

Gusts reached 55 to 70 mph in those areas but were clocked only at 5 to 10 mph at the Seattle-Tacoma International Airport, Carpenter said Thursday evening. The wind is expected to be on and off through Saturday, she said.

On Thursday, light snow moved north through the region, Carpenter said, and road crews have been preparing their plows.

It’s taking time because dry winds from the east are stripping moisture from the weather system that’s coming in from over the Pacific Ocean. That means it takes longer for the air to become saturated enough again for snow.

“If you don’t get snow today, then for sure you will on Friday and Saturday,” she said.

On Friday night into Saturday, weather models are showing we’ll likely get at least 3 to 6 inches of snow, with higher totals possible in Seattle depending on winds, and up to a foot in Pierce and Lewis counties near the Cascades, Carpenter said.

We’ll get a brief break from the snow Saturday evening, but experts are expecting another weather system Sunday into Monday.

“There will be slightly warmer temps, so at some point there’s going to be a switch from snow to rain later Sunday,” Carpenter said.

Kristell said she imagines this snow may be enjoyed more widely than perhaps in the past, as many people are not commuting.

“Hopefully more folks can enjoy it at home,” she said.

Carpenter warned that even a few inches of snow in the Seattle area can be hazardous, and encouraged motorists to stay aware of weather conditions and drive slowly. 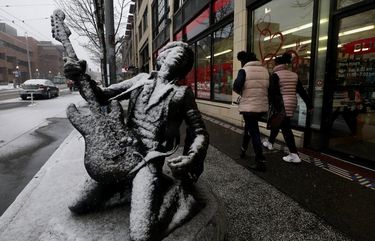